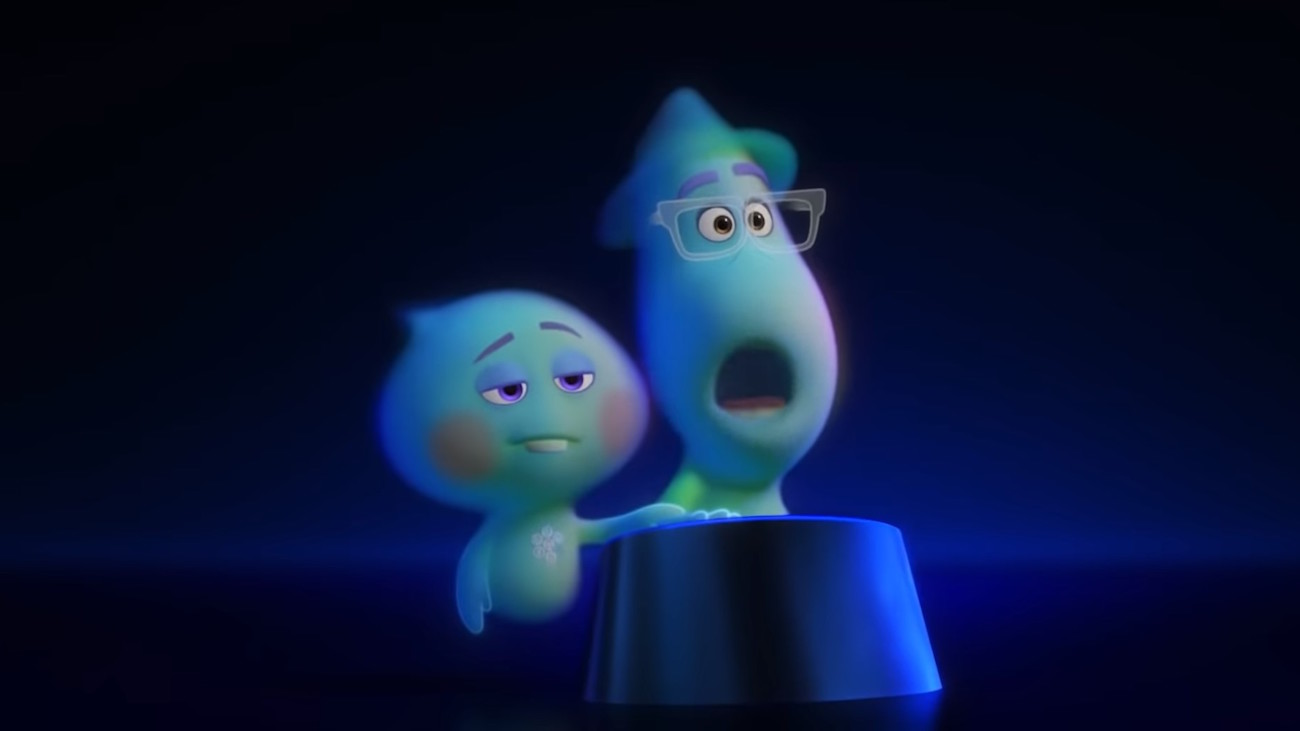 This article contains Soul spoilers. You can find our spoiler-free review here.

22, the incorrigible soul voiced by Tina Fey, has resided in the Great Before for a very, very long time. But just how long is that? Centuries? Millennia? By virtue of her name, a number designated to her soul upon arrival in the Great Before, it is hinted that she’s been watching our world with skepticism since the very beginning: a soul who’s had eons to say, “No, that living thing is not for me.”

In all that time, she’s also had countless mentors: Souls who completed a life on Earth and before going to the Great Beyond agreed to take some time off on the other side to offer 22 pointers on the finer things of life. Until she met a guy named Joe, it never ended well. That said it sets up one of the movie’s best running gags. Throughout Joe and 22’s experiences, the film frequently flashes back to random insert jokes about 22’s past, highly esteemed teachers.

It creates an opportunity for Pixar to dabble in the strangest bit of referential humor we may have ever seen in a kids’ movie. After all, how many young minds are familiar with the works of Carl Jung? It also  gives parents time for a couple of specific laughs, and maybe the chance to talk with their children afterward about just who those floating heads were. For that reason, we’ve compiled this handy list and brief guide to 22’s mentors.

One of the first dropped names from 22’s past mentors, and the one most often referenced in the film, is Abraham Lincoln. Perhaps this is because unlike George Orwell, most American school children under the age of 10 should be familiar with the 16th President of the United States.

Elected in 1860 and reelected in 1864, Lincoln is cited by many to be the greatest president in American history due to his ability to lead the nation through its greatest existential crisis, the Civil War. During that cataclysmic moment, he preserved the Union and eventually ended slavery, first in rebelling states via the Emancipation Proclamation and then more completely with the 13th Amendment. He then became a martyr in the eyes of the generations to follow since shortly after his reelection and the end of the war, he was the first president to be assassinated.

Most kids should know that, and they definitely know he’s on the penny. Hence the terrific joke of 22 asking Lincoln, “Are you really okay with being on the penny?” He insists it’s a great honor. But when she twists the knife and says, “Even with Jackson on the 20 [dollar bill]?” he breaks in abject horror. Not Jackson!

Another name dropped early—though I’m not sure we ever see him as an actual mentor—is Mahatma Gandhi, the nonviolent civil disobedience Indian leader who helped India achieve its independence from the British Empire.

Born in 1869 Gujarat, India, Gandhi had a profound effect on world history in the 20th century and beyond. After being educated in London and spending his early professional life in South Africa, where he raised a family, he returned to India and led anti-colonialist campaigns against the British government that occupied British India, as well as pushed for reforms that would create a religious plurality. He was briefly President of the Indian National Conference between 1924 and ’25, and eventually took to wearing his now famous loincloths and shawls as an act of solidarity with the working poor of his country. His image as the fasting leader of nonviolent resistance influenced civil rights leaders around the world.

In 1947, Britain resigned itself to granting India independence, but split the British Indian Empire into states, India and Pakistan, the latter becoming a country for India’s Muslim population. The resulting hostilities and tension eventually led to Gandhi being assassinated in 1948.

An honest to goodness saint, Mother Teresa was a Roman Catholic leader who dedicated her life to wholeheartedly caring for “the poorest of the poor.” So when she tells 22, “I like everyone except you,” you know 22 just has the devil in her—if such a thing exists in a theoretical construct like the Great Before!

Born Mary Teresa Bojaxhiu in 1910, Teresa grew up in what is modern day North Macedonia, before she left home at age 18 to join the Sisters of Loreto in Ireland. Soon moving to India, where she lived the rest of her life, Teresa took her solemn vows to become a nun in 1937 and in 1950 founded the Missionaries of Charity, a Catholic congregation that’s seen its sisterhood of nuns grow by the thousands. Until Mother Teresa’s death in 1997, she helped oversee her missionary’s fourth vow, again to serve the poorest of the poor, by managing homes of people dying of leprosy, tuberculosis, and HIV/AIDS, as well as managing soup kitchens, dispensaries, and orphanages.

Teresa was canonized as a saint in 2016, with Sept. 5, the anniversary of her death, now being a feast day in the Catholic religion.

One of the older mentors we meet in flashback, Nicolaus Copernicus was a Renaissance Man who really took the concept of being a “renaissance man” to heart. Both a polyglot and polymath, the Prussian thinker was a mathematician, astronomer, physician, classics scholar, translator, governor, diplomat, economist, and a doctorate in canon law with the Church. He spoke either five or six languages, and most importantly, is considered one of the pioneers of the Scientific Revolution in the 16th century. Indeed, this early era of scientific progress is also called the Copernican Revolution.

That is due to the fact Copernicus published his model of the universe shortly before his death in 1543. With his astronomical findings, he posited that the sun, as opposed to the Earth, is the actual center of the universe. This discovery—which really rediscovered a forgotten breakthrough from antiquity postulated by Greek astronomer Aristarchus of Samos in the second century B.C.E.—led to a better understanding of the universe, and eventually that the sun was merely the center of our solar system. Copernicus shattered the eco-centric view of the universe preached by the Church forever.

So when he tells 22 that she needs to stop thinking “you’re the center of the universe,” it’s pretty damn funny.

The self-described Greatest to ever enter a boxing ring, Muhammad Ali remains arguably the most famous heavyweight champ in boxing history, as well as a significant figure in the anti-Vietnam War and counterculture movements of the 1960s. So when he calls 22 “the greatest… pain in my neck,” she better listen up!

Born Cassius Clay Jr. in 1942, the man who would become Ali first won the heavyweight belt after beating Sonny Liston by TKO in 1963. At age 22, Clay became the youngest fighter to ever take the heavyweight title from a reigning champ, a record he still holds to this day. Shortly after the victory, Clay joined the Nation of Islam and eventually changed his name to Muhammad Ali.

Despite being the Greatest, Ali lost four years from his peak athletic career when he refused to be drafted into the U.S. military and serve in Vietnam on the grounds of being a conscientious objector. He was found guilty of draft evasion, stripped of his boxing titles, and denied the ability to professionally enter a ring until the U.S. Supreme Court overturned his conviction in 1971. Older but arguably even bolder in rhetoric, Ali suffered some losses in his later career yet still reclaimed the heavyweight title when he knocked out George Foreman in the eighth round of the “Rumble in the Jungle.”

The French Queen does not say anything particularly pun-y to 22, but her floating head is a great visual sight gag to anyone who knows how the French Revolution ended!

Marie Antoinette, a doomed and largely misrepresented monarch, was Queen of France from 1774 to 1792. Prior to that she was born an archduchess of Austria, one of the Emperor’s youngest children. She was married off to the French dauphin Louis in an arranged and loveless marriage at the age of 14 in 1770. Her standing in court improved after she began having children, however she became a popular figure of resentment in anti-monarchist pamphlets, which painted her as a promiscuous harlot whose children were illegitimate, and who conspired with her native Austria against France. It is from this caricature where the lie of Marie Antoinette saying, “Let them eat cake” was born.

Eventually she and King Louis XVI were arrested by leaders of the French Revolution, who eventually abolished the monarchy in 1792. Her husband was executed in front of the mob in January 1793; in October of the same year Marie Antoinette was tried by Revolutionary Tribunal for high treason. Two days later she likewise was executed by guillotine before the cheers of the mob.

About as cerebral an easter egg as one might expect from a Disney movie, Carl Jung appears briefly in a montage to tell 22 to “stop talking, my unconscious mind hates you!” We’re sure any parents who ever took a Psychology 101 course smiled.

Considered one of the pioneers of modern psychology, Jung was the Swiss psychiatrist and psychoanalyst who founded analytical psychology. Born in 1875, Jung saw the world change drastically during his lifetime and career from the 19th century until his death in 1961. This includes in the breakthroughs made by him and his onetime mentor, Sigmund Freud. Freud, the founder of psychoanalysis, considered Jung his heir until their diverging visions for the future of a “talking cure” created a schism between the men.

Jung’s analytical psychology was founded largely upon the idea of individuation, which related to the lifelong psychological process the mind is said to go through, separating an individual’s conscious and unconscious elements. This also led Jung to develop concepts like the collective unconscious and extraversion versus introversion. Whichever 22 is, she clearly doesn’t want Jung’s company!

One of the funniest, and honestly most subversive, easter eggs is only quickly alluded to when 22 (inside Joe’s body) drops some George Orwell truth bombs on an impressionable young girl, and Joe’s jazz student. “Like my mentor George Orwell used to say, ‘State sponsored education was like the rattling of a stick inside a swill bucket,’” 22 announces. “‘The ruling class’ core curriculum stifles dissent.’”

While the real Orwell didn’t exactly say these words (at least as I can find), he was of course an extremely wary and sharp critic of both governmental and capitalist control. In another Orwell chestnut, he opined the future is “a boot stamping on a human face – forever.” Never the optimist, Orwell wrote perennial high school favorites Animal Farm—a parable about the corruption of the Soviet Union and Bolshevik Revolution with talking animals—and Nineteen Eighty-Four, the ultimate dystopian text about an authoritarian regime controlling every facet of citizens’ lives, with propaganda being administered by the “Ministry of Truth,” as but one example.

Orwell likely was skeptical of state education, and probably would have been even more so of the recent phenomenon of corporate sponsored education, since he wrote, “The most effective way to destroy people is to deny and obliterate their own understanding of their history.” In this vein, he did refer to capitalism’s use as advertising as “the rattling of a stick inside a swill-bucket” that led to the “blind worship of the money-god.”

That this is quoted in a Disney movie intended to sell toys, theme park attractions, more “swill” to the masses is a little amusing… if disheartening that the quote was reappropriated to overlook the fully anti-capitalist thrust of Orwell’s sentiment.