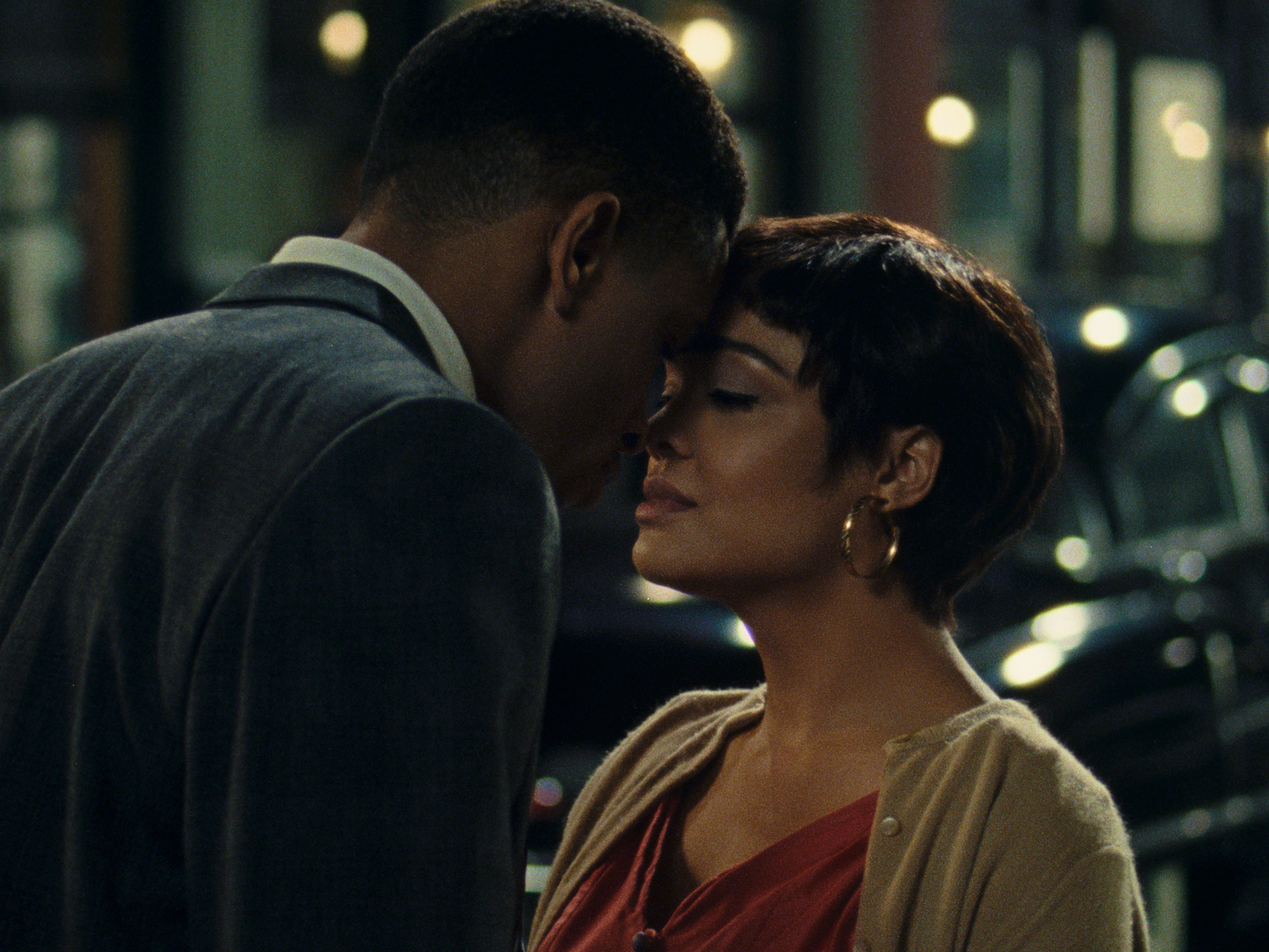 The title card that opens writer-director Eugene Ashe’s Sylvie’s Love (now streaming on Amazon) informs us that we’re in New York City, in 1962. That announcement quickly becomes superfluous, however — as soon as you hear Nancy Wilson’s version of “The Nearness of You” over vintage yellow cabs whizzing by old-school cafeterias, cigar shops and the Canadian Club sign in Times Square, along with the sight of Tessa Thompson looking positively radiant in a radioactively blue evening gown, you know exactly where and when you are. If nothing else, Ashe’s meticulous throwback recreates a lost time and place with a magnificent obsessive’s attention to detail; the opening sequences are simply a precursor of the bygone fashion parades and glorious, lost Gotham Deco gluttony to come. As for Thompson, she’s Sylvie, patiently waiting outside Town Hall, looking around for her date as a dapper crowd files into the venue. (Wilson is, in fact, on the bill tonight; Cannonball Adderly and “Moms” Mabley will be playing there in a few days. 1962!) Welcome to the lush life.

Suddenly, she spots a young man milling about near the front — the same gent we’ve just seen in a recording session, working a tenor saxophone with a jazz quartet and dripping with Blue Note coolness. “Robert Holloway!” she says, slightly amazed. These two know each other. Five years ago, Robert (Nnamdi Asomugha) walked into a Harlem record store in search of Thelonious Monk’s just-released “Brilliant Colors.” Sylvie is milling about behind the counter, watching “I Love Lucy”; her dad, Mr. Jay (Lance Reddick), owns the joint. Robert walks away with the record and a part-time job at the shop. Though she’s more of a rock & roll fanatic, the two bond over music. (If you’re idea of pillow talk is someone explaining why a person would love Sonny Rollins’ “Way Out West,” dear god, this is the movie for you.)

A friendship slowly begins to blossom into something more passionate, though a relationship between the two is immediately beset by obstacles. Sylvie is told by her prim and proper mother (Erica Gimpel) that he’s beneath her stature. Robert is informed by his bandleader (Tone Bell) that, thanks to the patronage of a wealthy, white jazzbo who goes by the handle “The Countess” (Jemima Kirke, generating some serious Big Dorothy Malone Energy), the quartet has secured a longstanding residency in Paris. They reluctantly say goodbye. By the time she spots Robert again, standing outside Town Hall’s doors, Sylvie is married, a mother and living in the suburbs. She’s simply come into the city to meet her rambunctious cousin (Aja Naomi King) for the concert. He’s only briefly in town to record. Still, some embers never really stop burning ….

There’s more — a lot more — to come, including adultery, bigotry, revealed secrets, a TV cooking show, the appearance of MC Lyte, Eva Longoria doing a bang-up job on Celia Cruz’s “Quizás, Quizás, Quizás,” triumph, tragedy and several plot turns that are better discovered than described here. Miles Davis and Motown get namechecked; so does CORE and the ’63 March on Washington. The incidents pile up because Sylvie’s Love is, first and foremost, a flashback to the torrid Hollywood melodramas of yesteryear, and that’s what you got when you paid your ticket. Had this been made some time in the 1940s, Fred MacMurray and Barbara Stanwyck would be playing these roles. In the 1950s, you likely would have got Rock Hudson and Jane Wyman, or if the producers had wanted to skew younger, Troy Donahue and Sandra Dee.

The fact that you’re seeing this movie with Asomugha and Thompson in the leads, however — something you almost assuredly would not have seen when these types of movies were in vogue way back when — is part of the point of Sylvie’s Love, and can’t be underestimated. Or, for that matter, underappreciated: This is, in so many ways, an attempt to stake a claim in this territory that’s was denied African-Americans actors and audiences in the mid-20th century, so Ashe is belatedly rectifying the situation in the 21st century. He’s also clearly indulged in some serious TCM binge-watching as research, as has cinematographer Declan Quinn, costume designer Phoenix Mellow and production designer Mayne Berke — the way these three have managed to channel the era and pay homage to the luxe, operatic over-the-topness of the era’s movies will make you swoon as much as the central romance. What Asomugha, a former NFL cornerback turned actor, and Thompson sometimes lack in chemistry is made up for by what feels like a commitment to the performance style of the movie’s hand-to-forehead ancestors. The affectations of their emoting and line readings make complete sense if you’ve spent any time basking in the back catalog of Douglas Sirk, or even if you simply remember the Pulp Fiction quote regarding the director (“burnt to a crisp or bloody as hell”). This lovingly recreated Sirkus Maximus doesn’t work without them.

That is, when Sylvie’s Love works as a melodrama unto itself. There are scenes when Ashe, the cast and the crew do make you feel as if you’ve stepped into a time machine. And then there are a number of moments where you feel a certain disconnect, as if you were watching modern actors and below-the-line artisans indulging in a spirit-of-’62 costume party. You still applaud the tribute, and any film that lets Thompson play the emotional scales should be praised. But when the spell gets broken, temporarily or otherwise, it’s easy to be overwhelmed by the craft and care of this affectionate reclamation and still feel that all the swooning that heaven allows is almost, but not quite, enough.