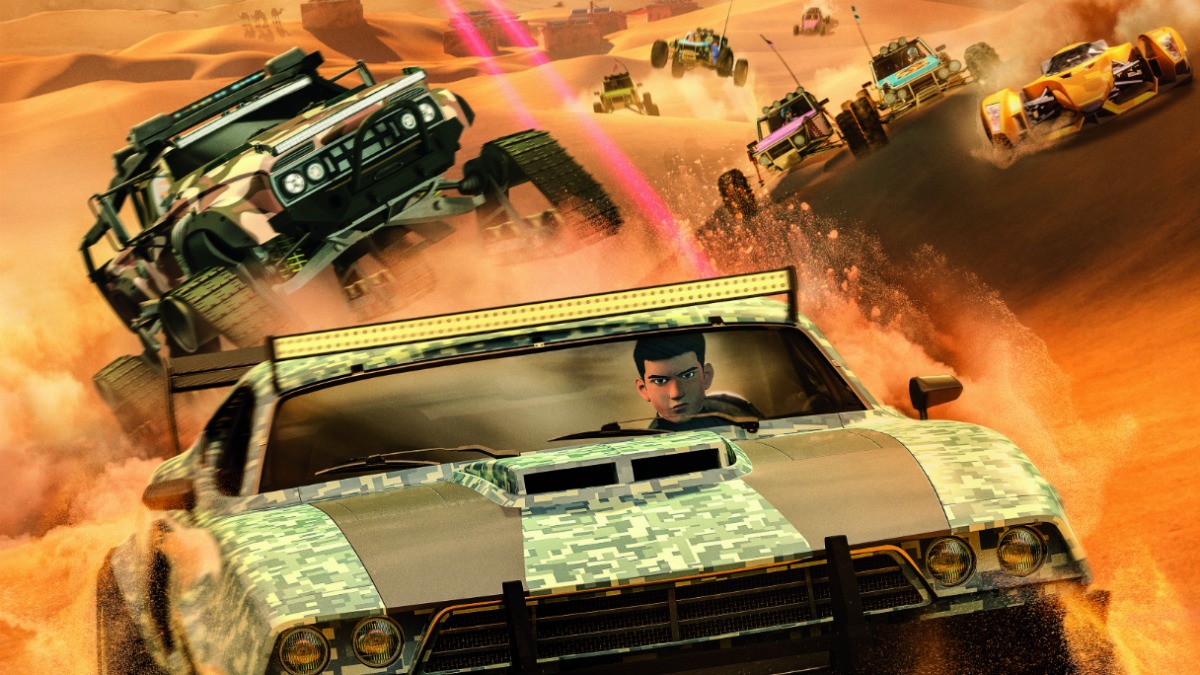 The Fast & Furious films love their over the top action. In the trailer for F9 alone we’ve got a “magnet plane” catching a car, a Jeep driving along a collapsing bridge, a car somehow catching a steel cable and using it launch itself across a gorge, and a car with a rocket engine strapped to it.

Spy Racers, the animated spin-off to Fast & Furious, is no exception to this. The show has often delved into its own over-the-top action and in the show’s third season, available now on Netflix, the show takes this action to another level. In in the fourth episode, ‘The Hunt’ the entire story is just one long action filled car chase. Not only that, it’s an action scene that’s a clear Mad Max send up.

The team is on the trail of the big bad of the season, Cleve, but are stuck crossing a huge desert with a caravan of henchmen on their trail. Throughout the episode they have to follow a series of water explosions without losing any speed in their buggies all while trying to not get killed by sand boarders, people with electric batons, grenades, and a guy with a robo arm that shoots lasers.

The Mad Max: Fury Road influence is obvious and the episode proudly wears that on its sleeve, the whole adventure having a delightfully manic energy. However, crafting an entire episode that’s just an extended action sequence isn’t easy. Executive producer Tim Hedrick explains that the first problem they had to overcome was simply the location of the season, the Sahara Desert. They worried that with the limited number of sets they were given (and the fact the whole season is set in the desert) it’d look the Spy Racers team were driving past the same dune every day.

“It’s going to be like Yogi Bear just going past the same door,” Hedrick remembers worrying. Solving that problem fell to CG supervisor Chris Browne and Hedrick praises his technique of getting around it.

“He built this 3D world that really made it possible for us to make it like we’re in the Sahara Desert. He did a fantastic job.”

The next problem to overcome was that manic energy alone couldn’t carry an episode that’s all action. They had to make sure it was clear what the Spy Racers team was trying to achieve the whole story or otherwise it’d turn into a mess.

“The team (has to say things) like, “we have to follow the water trail” and then every so often you check back in what with that and it’s like, “it’s over there. We have to go through them” (or) “it’s over there, we have to go around them!” Otherwise it just devolves into a bunch of people driving around in the desert with no point.”

“You can just spend days and days coming up with bits,” Hedrick lays out, “like, “oh, what if he jumps off and does this sand surfing,” or, “What if Rafaela hits the car and it tumbles over and takes out her own guys?” I mean, it’s just coming up with gags like that. That’s really fun.”

‘The Hunt’ is easily Fast & Furious Spy Racers’ most ambitious episode yet and pulls off its tough mission remarkably. The teams solutions to the problems they faced, make everything clear and visually interesting, sounds simple. It’s that kind of ground work however that helped them craft an episode long action scene that easily stands up to some of the best action sequences in the films. And that’s saying something when in The Fate of the Furious The Rock catches a missile.