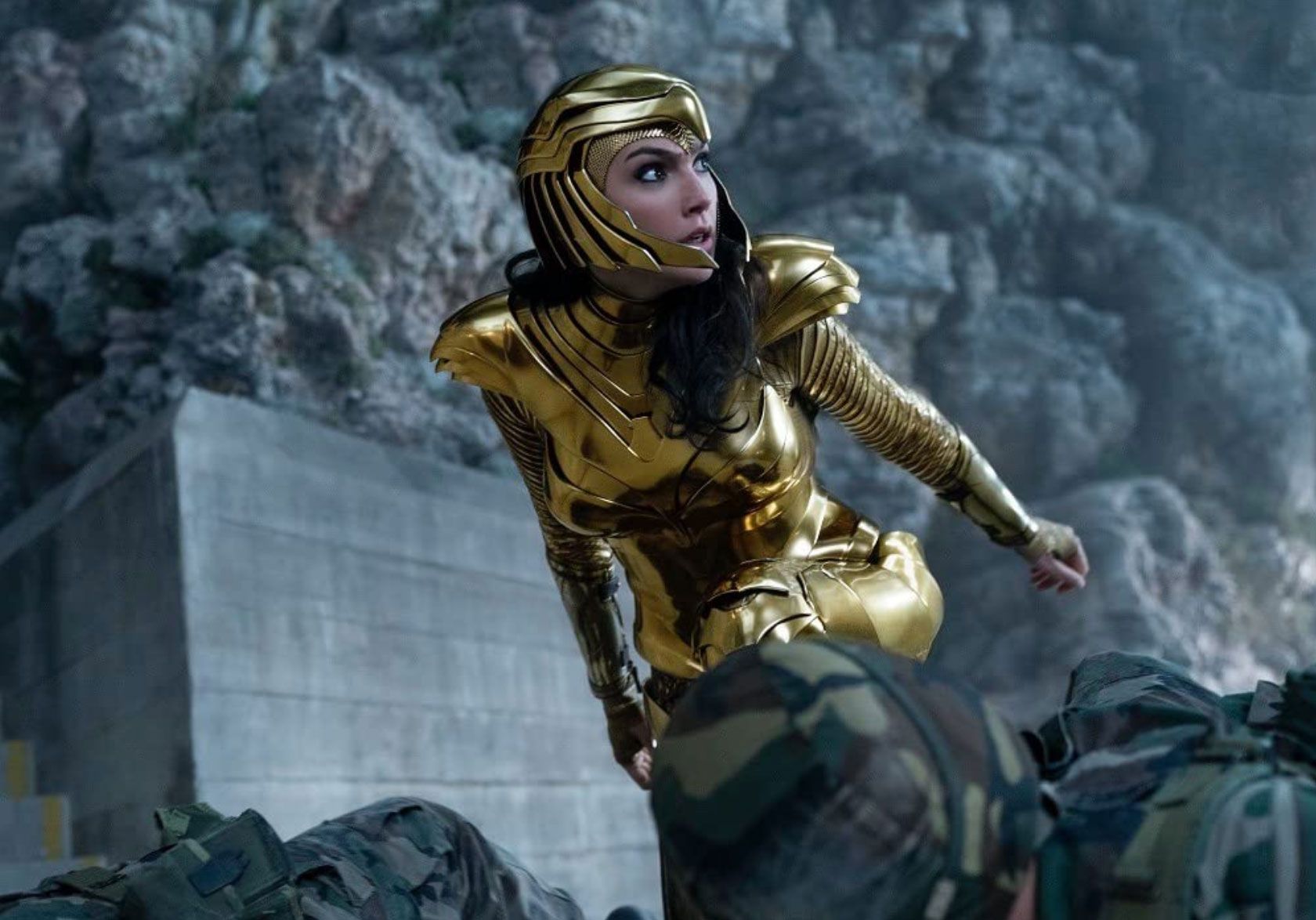 This article contains Wonder Woman 1984 spoilers. We have a spoiler free review here.

There’s a lot going on throughout Wonder Woman 1984‘s (very long) runtime. At one point in the film we learn the origin of Diana’s Golden Eagle armor, and that it once belonged to a legendary Amazon warrior named Asteria, who stayed behind to fight the armies of men so that her sisters could escape to Themyscira. Diana mentions that she has tried to find Asteria since she arrived in “our” world, but so far hasn’t had any luck. It’s presumed that Asteria is lost to history.

Until that mid-credits scene, of course, when we see a mysterious robed figure avert disaster in a crowded marketplace. When she turns to the camera, we learn it’s not just Asteria, but a beloved figure in DC and pop culture history, and one who could have implications for the DCEU down the line, too.

So let’s get down to it…

Lynda Carter shows up as a legendary Amazon warrior (and the original owner of the Golden Eagle armor) who stayed behind while under attack by the armies of men so the rest of the Amazons could make their escape to Themyscira.

Carter, of course, is one of the most important actors to play a superhero onscreen, having played Diana Prince across three successful and influential seasons of the Wonder Woman TV series between 1976-79. While she wasn’t the first to portray Wonder Woman in live action, Carter’s performance remains iconic for generations of fans, and giving her a small but important role here is a wonderful tribute both to her and the history of Wonder Woman on screen.

For the purposes of Wonder Woman 1984, you should treat Asteria as a new character created specifically for the DCEU. But there’s still some stuff worth knowing about her. Let’s start with her (meager) DC Comics history…

If you’re looking to DC Comics for anything substantial about Asteria, well, prepare to be disappointed. As far as I can tell the character makes her one and only very brief appearance in 1998’s Elseworlds’ Finest: Supergirl & Batgirl by Barbara Kesel, Matt Haley, and Tom Simmons. It’s an alternate universe tale in which Bruce Wayne never became Batman and Kal-El died as a baby before becoming Superman, leaving a world in which Barbara Gordon’s Batgirl and Kara Zor-El’s Supergirl are the foremost heroes of the DC Universe.

In this story, there’s a version of the Justice Society of America that’s led by Wonder Woman, whose members include different versions of DC heroes like Shazam, Dr. Midnite, the Flash, the Abin Sur Green Lantern, Big Barda, Hawkwoman, and more. Someone named Asteria is spotted hanging out at JSA HQ with Tim Drake, presumably making her a junior member of the team, or possibly a former sidekick (could she be this universe’s version of Donna Troy?). She basically appears in only three panels of the book and is never heard from again from a story perspective as far as I can tell.

It’s possible that the name “Asteria” has been used in other places in prime DC continuity, but so far, I’m unaware of it.

But the name Asteria has some other significance, and the way that Wonder Woman 1984 uses the character here cleverly ties back to Wonder Woman’s first origin story in clever ways.

The name Asteria appears many times throughout Greek mythology. But like anything involving Wonder Woman on the page or the screen, such mythology can be adapted pretty freely just to suit the needs of the story being told at any moment. But the fourth book of Diodorus Siculus’ massive Bibliotecha historia deals with Greek mythology, and it refers to Asteria as one of the Amazons slain by Heracles when he tried to take Hippolyta’s girdle.

And that’s where the Asteria of Wonder Woman 1984 begins to align slightly with the mythological version and stories in DC Comics. In mythology, one of the 12 labors of Heracles was to retrieve the girdle of Hippolyta (Wonder Woman’s mother). This became part of the basis for Wonder Woman’s origin as told in her first appearance in 1941’s All Star Comics #8 by William Moulton Marston and H.G. Peter, where Hippolyta’s loss of the girdle leads to Heracles and the army of men enslaving the Amazons. Even after their escape, they wear those iconic bracelets as a reminder to never allow themselves to be enslaved by men again.

In the Bibliotecha historia, Asteria is one of the Amazons who falls in battle with Heracles before he retrieves Hippolyta’s girdle. To be clear, Asteria is never mentioned in these early Wonder Woman stories, but the movie’s tale about how she remained behind to allow the rest of the Amazons time to escape is a nod to this part of her origin story that has otherwise remained unexplored on the big screen. It’s a clever and subtle way to join Wonder Woman’s mythological roots with her comic book origins.

Hopefully we see more of Lynda Carter’s Asteria if and when Wonder Woman 3 becomes a reality.

Wonder Woman 1984 is now available to stream on HBO Max.