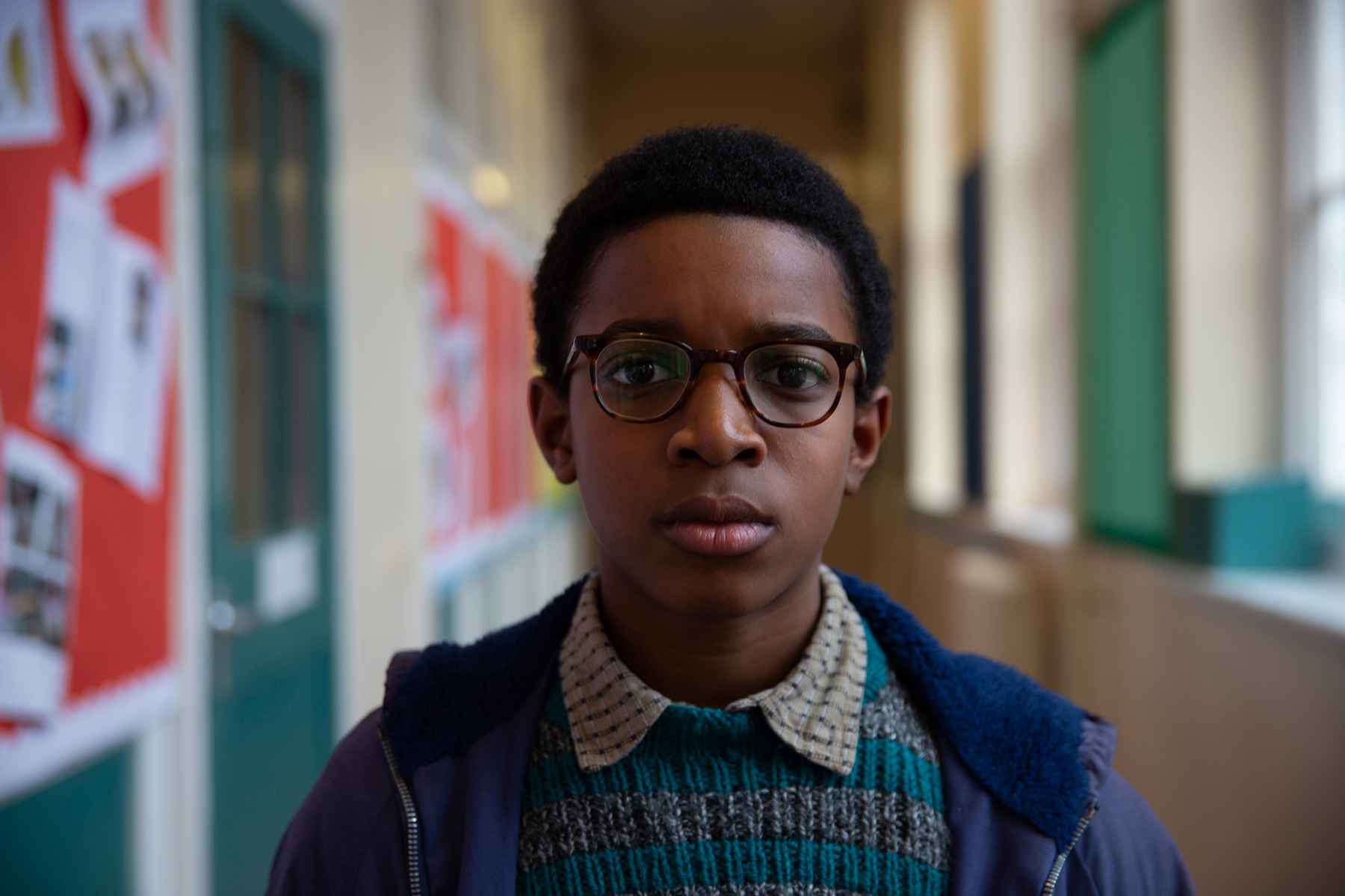 In Education, the fifth and final of Steve McQueen’s Small Axe films, we’re given a young hero named Kingsley Smith (Kenyah Sandy), whose mother Agnes (Sharlene Whyte) is a nurse, whose father Edmond (Daniel Francis) is a carpenter, and whose sister Stephanie (Tamara Lawrence) is 18 and can read. This last point is not as arbitrary as it may seem. One the feats of McQueen’s movie is that, by the end, the ability to read — proof of having been educated — is all the more powerful for seeming exceptional. It’s something promised of the London education system. Yet in this movie, set in the late ‘60s, that promise has proven false — particularly for the young black children of Britain’s immigrants.

Of which Kingsley is a case in point. He goes to a London school that employs teachers who stifle more than teach, doling out punishment unevenly. Kingsley gets in bigger trouble than his white peers despite being guilty of the similar classroom disruptions. More damningly, he’s lagging in reading skills in an era that hadn’t yet learned to assess learning disabilities with sensitivity. And his I.Q. scores are low — low enough for the school system to feel justified in sending him elsewhere. It’s not long before the headmaster of the school calls him into the office, alongside his mother, to discuss an alternative option: “special school,” as the headmaster calls it. Durant School. The headmaster tries to paint this as good, heartening news. Smaller classes. More attention to Kingsley’s needs.

From ‘Borat’ to ‘Wonder Woman,’ Here’s How to Stream These New Movies Online

‘It’s About a Certain Kind of Blackness’: Steve McQueen on the Making of ‘Small Axe’

Yet the Kingsley we’ve met to this point is a curious, sympathetic young man, a 12-year-old who dreams of being an astronaut, who draws pictures of rockets before praying at night. A white schoolmate jokes that you can’t have a black man in space. His mother — an overworked nurse — doesn’t have the emotional reserves to nurture her son. Instead, finding him up one night immersed in his drawing and dreaming, she spanks him. She loves her son, as the movie makes very clear. But when she hits him, McQueen’s handheld camera zips down to catch the blows, then up to the mother’s face to register her frustration. Then it lands on the face of Kingsley, stricken with horror and grief.

The subject of Education is, in part, the humiliations of the system for both kids like Kingsley and their parents, immigrants who’ve begun to confront the limits of this nation they now call home. The Durant School experiences we see are notable, in that regard. There is no outright physical violence at the school; mostly, there’s complete neglect. Certainly there’s no learning. And again, as depicted by McQueen, the humiliation is palpable. A green bus picks Kinglsey up right in front of the campus of his old school; Kingsley starts hiding from his friends, with their murmurings of what happens to kids who wind up at schools like Durant. A teacher at Durant — who doesn’t teach the students to read as read at them until their eyes water with boredom — makes casual comments about about Kingsley’s supposed jungle origins.

It sounds more on the nose than it feels as you watch. McQueen and co-writer Alastair Siddons take care to weave this situation complexly, particularly in their dramatizing of the family dynamic, with its push-pull between the practicality of labor (a father who thinks his son should just learn a trade and get on with it) and the practicality of good schooling (as felt by Agnes). This schism gets dramatic heft thanks to a pair of linked, life-changing visits. A psychologist named Hazel (Naomi Ackie) turns up at Kingsley’s school and takes an interest in him. After that, an organizer named Lydia Thomas (Josette Simon), drops by the Smith home and meets with the young man’s mother. She says things that Agnes isn’t initially sympathetic to — namely, about what this “special school” really is, and why it’s so perilous. She alerts Agnes to the phrase “educationally subnormal” — a descriptor, by way of the government, for children like Kingsley. And she leaves a pamphlet behind.

When we later see it straight-on, the pamphlet — Bernard Coard’s How the West Indian Child Is Made Educationally Sub-Normal in the British School System — is pictured next to a rights card warning black Londoners about the local police’s “stop and search” practices, equipped with a bulletpoint set of survival instructions (“DO ask why they want to search you. DO note the numbers of any police involved”). Thus the political context of Hazel and Lydia’s organizing – they are, it turns out, working together — is clear. The urgency of linking Britain’s police practices to its education practices is double-underlined and startling. Coard himself would later note that his intention behind what became known as “the ESN book” was, in part, to inform these parents of the reality of British schooling system in the ‘60s and ‘70s — and to radicalize them, accordingly, encourage them to be organized, aware. More involved. Just as urgently, Coard’s book emphasizes the extent to which this will have a generational effect; the students who enter these schools never reemerge, are doomed to low-paying jobs and systemic inequity for the rest of their lives by virtue of being excluded from a proper education

All of this rings true in McQueen’s rendition, and the filmmaker shows real skill in allowing these ideas and their implications to connect and congeal unexpectedly. Kingsley lives in a home in which he is afraid to make known to his parents the true extent to which he cannot read. Yet the film also gives voice to complicated, related perspectives: one in which black students go to “regular” London schools and still emerge unable to read, another in which Kinglsey’s parents’ generation is already living the consequences of what a limited education can afford black adults, particularly in the moment of this film, which is set on the eve of the Thatcher era. (When her name arises here, it’s with bruising irony.)

There’s a slim but powerful thread of Education devoted to Agnes and Esmond coming to terms with these truths, one that rises to the foreground of the film almost unexpectedly. Agnes’ conversion from a skeptic, if that’s even the word for it, to an angry and active hands-on parent, regarding her son’s education, is a psychological turn mirrored throughout the Small Axe series. We saw it in this conversation Mangrove; we saw a different version of it Red, White and Blue; yet another in Alex Wheatle. Education could, in so many ways, be the name for this entire series, committed as it is to detailing not merely black immigrant hardship, but black immigrant activism and uprising.

These films’ heroes often move from just trying to survive, through hard work, and keeping their heads down, and staying out of the rest, to doing more than merely surviving — to being awakened to the need for a starker, more active politics. Education is, in that sense, a great place for the series to end, however small it may seem. Its power is maybe not totally felt until the very end, by way of a simple act: a son reads, a mother reacts. The image, the idea, is heavy. A testament to McQueen’s work, here and throughout, is that you might nevertheless feel some hope. Systems are slow to change. But the fight to survive, the film seems to tell us, is worth remembering.