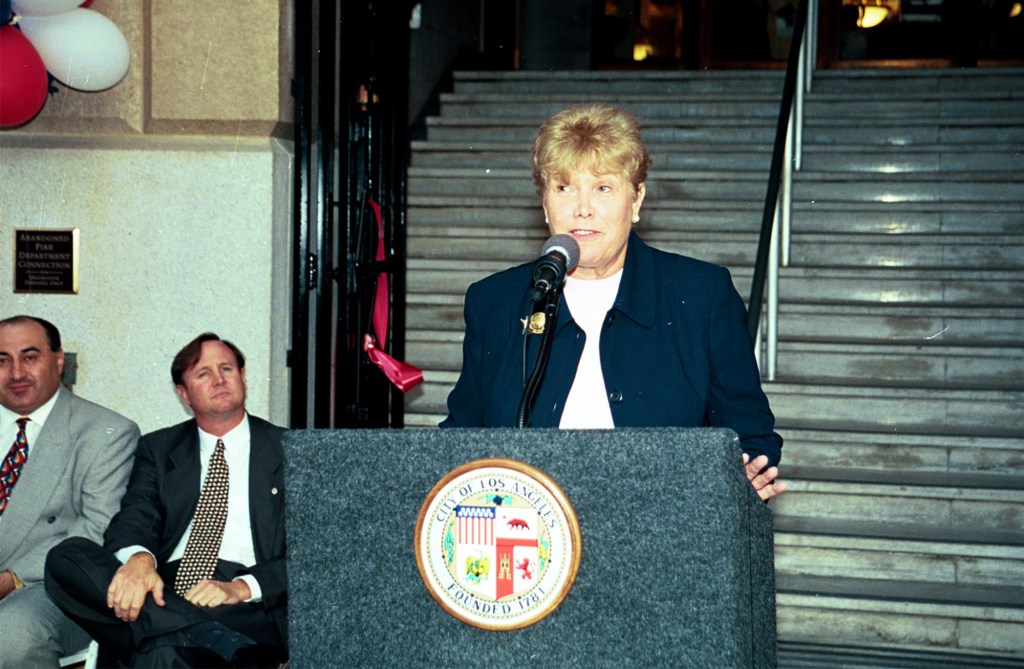 Joan Milke Flores, one of the Harbor Area’s most enduring public figures and the first woman to represent District 15 on the Los Angeles City Council, has died. She was 84.

Flores, who died at her San Pedro home in mid-December from complications of a bone marrow disorder, had a remarkable rise from City Hall stenographer to influential councilmember, serving on the panel from 1981 to 1993.

During her time on the council, Flores sponsored the establishment of the Alameda Corridor Transportation Authority, creating a $1.5 billion truck and rail route from the port to downtown Los Angeles; backed the city observing Martin Luther King Jr. Day; led a ballot initiative that gave the council veto power over city commissions; and helped pave the way for the area just below the Korean Friendship Bell at Angels Gate Park to become city park space.

“It’s hard to believe she started her career as a clerk typist for the city,” Supervisor Janice Hahn, who nearly a decade later also represented District 15 on the council, said, “and then worked her way up to eventually running for City Council and becoming the first woman to hold the office of council member for the 15th District.”

Joan Milke Flores was born on May 9, 1936, in Sheboygan Falls, Wisconsin, and was one of six children. Her father, a welder and machinist, moved the family to Los Angeles when Flores was 8 years old.

“Being 10 years younger, I was the beneficiary of her love and wisdom when I was in my teen years,” she said in a written statement. “She taught me how to drive; helped me with my school work and special projects. As adults, we shared the same interest in reading true crime books.”

Flores graduated from Franklin High School in 1954 and shortly after got a job in the stenographer pool at LA City Hall. Soon after, she moved to Councilman John S. Gibson’s office.

Flores was a quick study and took on more responsibility over the years, eventually becoming Gibson’s chief deputy in 1969, a post she held for 13 years. She moved from her Highland Park home to San Pedro, the core of Gibson’s 15th City Council District,  in 1979.

She helped Gibson manage his final campaign in the era before term limits. And when Gibson decided not to run for reelection in 1981 due to failing health, he urged her to run for the seat.

Flores had strong support in Watts — the 15th District also includes Harbor Gateway, Harbor City, Wilmington and San Pedro — and endorsements from both Gibson and then-Los Angeles County Supervisor Kenneth Hahn, Janice Hahn’s father. She eked out a narrow win over John Greenwood, who later went on to serve on the Los Angeles school board.

During her three terms, Flores supported increasing the police force and focused on stricter permitting and enforcement of hazardous waste. She also authored an ordinance to curb smoking in public places.

Flores also sponsored several ballot initiatives that changed the way the city did business, among them Charter Amendment 5, which voters OK’d in 1990 and gave the City Council veto power over commissions, including those overseeing the Port of Los Angeles and Los Angeles International Airport.

She also sponsored an anti-apartheid law prohibiting the city from contracting with companies that did business in South Africa.

And under her watch, the development of the Cabrillo Marina Complex, Worldport Walkway, Sheraton Los Angeles Harbor Hotel (now the Crown Plaza) and the Pacific Place office building in San Pedro were accomplished.

Flores’s stint on the council ended in 1993, when she lost her bid for a fourth term to Rudy Svorinich Jr.

Bernie Evans, who served as Flores’s chief of staff, said that soon after she was elected, her colleagues would follow her suggestions with, “I move what Joan just recommended.”

It soon became a pattern, he said.

Flores’s defeat to Svorinich was a surprising upset, but one that she managed to take in stride.

In June 1993, amid tears and shared memories at a City Hall farewell party, Flores spoke about aceptance.

“I’m a realist and I don’t really have a problem accepting change,” Flores said. “I’ve always known someday I wouldn’t be on the City Council.”

By then, Flores already had made a push for higher office, losing a 1990 bid for California Secretary of State.

Still, those who knew her had pleasant memories of Flores’s time on the City Council.

“She was a joy to work with and for, and I treasure my years with her office,” said Niki Brown Tennant, Flores’s communication deputy. “I learned what true public service is and why it is so important.”

Flores aas “ethical, and unapologetic in seeking what was best for her constituents,” she added, “(and) she was also a very genuine and down-to-earth approachable person who followed through on every constituent complaint we received.”

Flores adapted well to private life, according to an Aug. 7, 1994, Daily Breeze article.

“I wouldn’t exchange the experience I had in public life for anything,” she told the newspaper. “But there’s nothing that could drag me back into it. I didn’t realize the pressure.”

In 1998, Svorinich, her successor, dedicated a section of park space on Paseo Del Mar, just west of Gaffey Street, as “Joan Milke Flores Park.” The park consists or a rolling, grassy hillside with picnic tables just west of and below the Korean Friendship Bell.

During the dedication, Flores said feelings had mellowed following the 1993 campaign.

“It was very generous for him to do this,” she said at the dedication. “It isn’t always easy to get over feelings from a campaign. It speaks well of him to be able to say I was able to pave the way for some of things he’s accomplished. It’s not an easy thing to do.”

Svorinich, after learning of his predecessor’s death, called Flores “a woman of class, dignity, grace and accomplishment.”

“While we were political rivals for the briefest of time years ago, our relationship both before and after the 1993 council election was very pleasant and cordial — something that is rarely seen in politics anymore,” Svorinich said in a written statement. “She was truly a remarkable person of great fortitude and character.”

After leaving office, Flores took up golf and piano lessons, and spent time with her family. She was a devoted Los Angeles Dodgers fan and was thrilled by the team’s recent World Series win, said her grandson, Trevor Davis, whose college baseball career she also followed closely.

Flores was married for a decade earlier to Sam Flores, a director with the Police Protective League. They had one daughter, Valerie, who is now a senior assistant Los Angeles City Attorney. The couple later divorced.

Funeral arrangements are pending until the coronavirus pandemic subsides, but Davis said his grandmother, who died Dec. 19, will be laid to rest in the St. Peter’s Church courtyard at Green Hills Memorial Park, in Rancho Palos Verdes. The family chose that spot, Davis said, in honor of the Joan Milke Flores Community Concerts held at the historic church when the chapel stood in an earlier location and she was still in office.

“We wanted her to be somewhere to which she had a connection,” Davis, a senior political science and business major at Cornell University, wrote in an email. “When she died, she was in the living room of her San Pedro condo watching the ships come in.”

Flores is survived by her longtime partner and former chief of staff, Bernie Evans; a sister, Ruth (Milke) Rinker of Santa Maria; daughter Valerie Flores of La Canada; a grandson, Trevor Davis of New York; and many nieces and nephews.