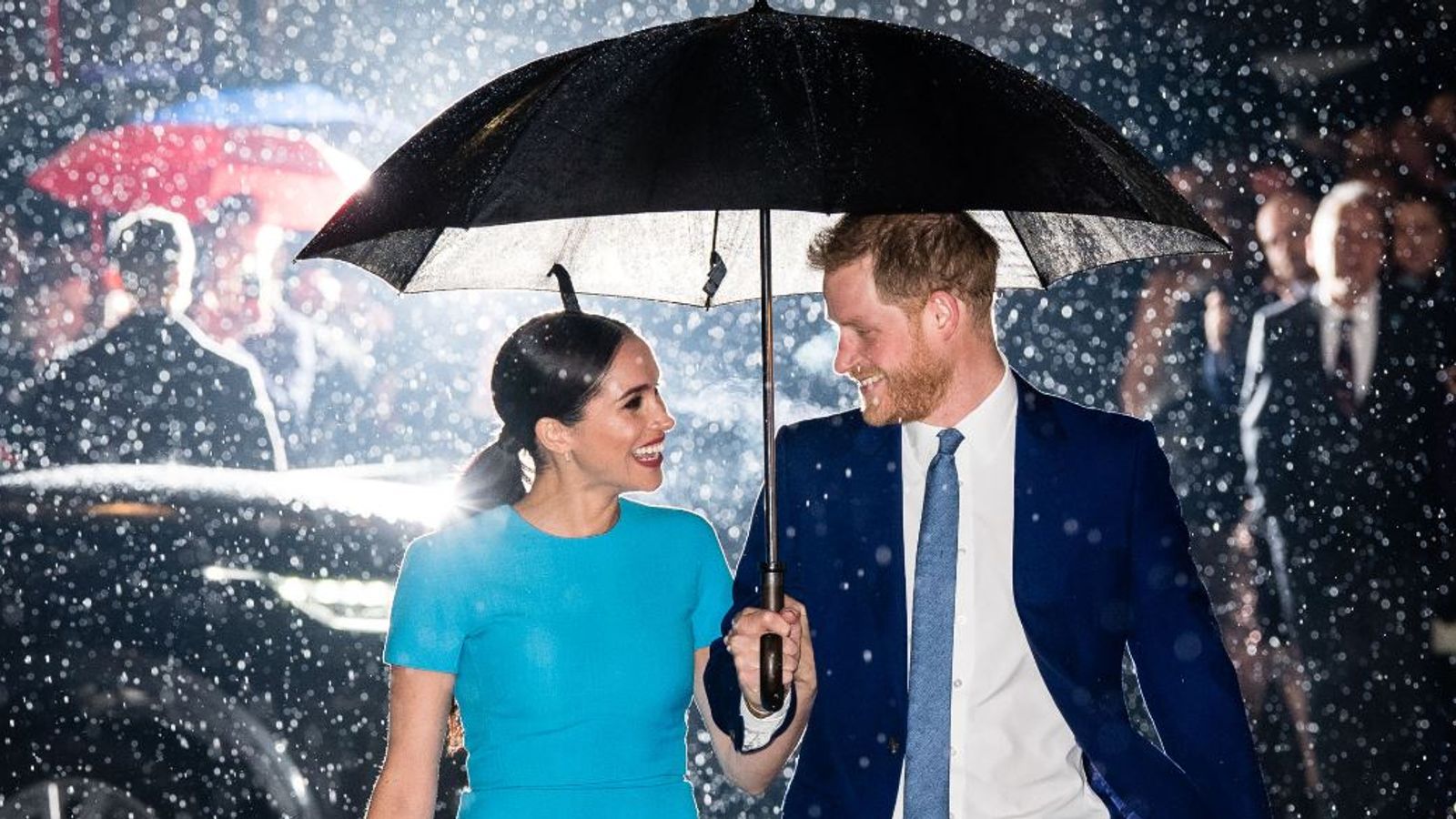 The Duke and Duchess of Sussex have launched their first podcast – which they both produce and present – for Spotify.

The half-hour “Holiday Special” featured celebrities, including Elton John and James Corden, reflecting on the past year and “sharing lessons, reflections and hopes for 2021”.

It also includes “personal anecdotes and inspirational stories”, with others guests chatting to Harry and Meghan about their own life experiences.

The podcast venture follows a high profile Netflix deal to become film and TV producers, after announcing they wanted to step away from royal life and become financially independent at the start of 2020.

In the audio show, they pay tribute to those who “have experienced uncertainty and unthinkable loss” during a difficult year, and thank healthcare workers for their sacrifices.

The couple – who have been married for two and a half years – also expound the value of love, telling their listeners “love wins”.

Harry said: “We’re glad you’re here. As we all know, it’s been a year. And we really want to honour the compassion and kindness that has helped so many people get through it.”

More from Duchess Of Sussex

Meghan added: “And at the same time, to honour those who have experienced uncertainty and unthinkable loss. Our thoughts have been with you, especially during this holiday season.”

In his audio diary for the podcast, Sir Elton John said: “We were in the middle of a tour and then COVID started and we came back to England in May, and it was very strange because we were going full pelt, and then all of a sudden we ground to a halt.

“I’m 73 years old, and I’m a semi diabetic, so I’m in a risky area there, I have an underlying condition as they say. I’ve seen my immediate family – Zachary, Elijah and David – all the time.

“But my relatives, who I love, haven’t been able to see much of them at all, and I’ve only stayed connected with him by phone, of course, and by Zoom.”

The show ends on a romantic note, featuring This Little Light of Mine – the song which was played at the end of their wedding at St George’s Chapel, Windsor Castle in May 2018.

Meghan said: “From us I’ll say no matter what life throws at you guys, trust us when we say, love wins.”

The podcast is Archewell Audio’s first offering in a multi-year partnership with the streaming service, as part of their charitable foundation Archewell.

The royal couple’s “audio-first production company” is expected to deliver a complete series next year.

Harry and Meghan have appeared on a number of different podcasts over 2019 as guests, including the Teenage Therapy podcast to mark World Mental Health Day, where Meghan described how “in 2019, I was the most trolled person in the entire world”.

And just last month Meghan wrote about the experience of losing her second child in The New York Times, in a bid to break down the stigma around talking about miscarriage.

Instagram Co-Founders Create Artifact, a News App Not Afraid of Busting Fake News
Elon Musk and Right-Wing Friends Do Us a Favor By Hiding Their Tweets
Elon Musk cleared of deceiving investors with Tesla tweet
Poco X5 Pro 5G Price in India Leaked Ahead of Launch: All Details
Two weeks later, what we know — and still don’t know — about Monterey Park shooter