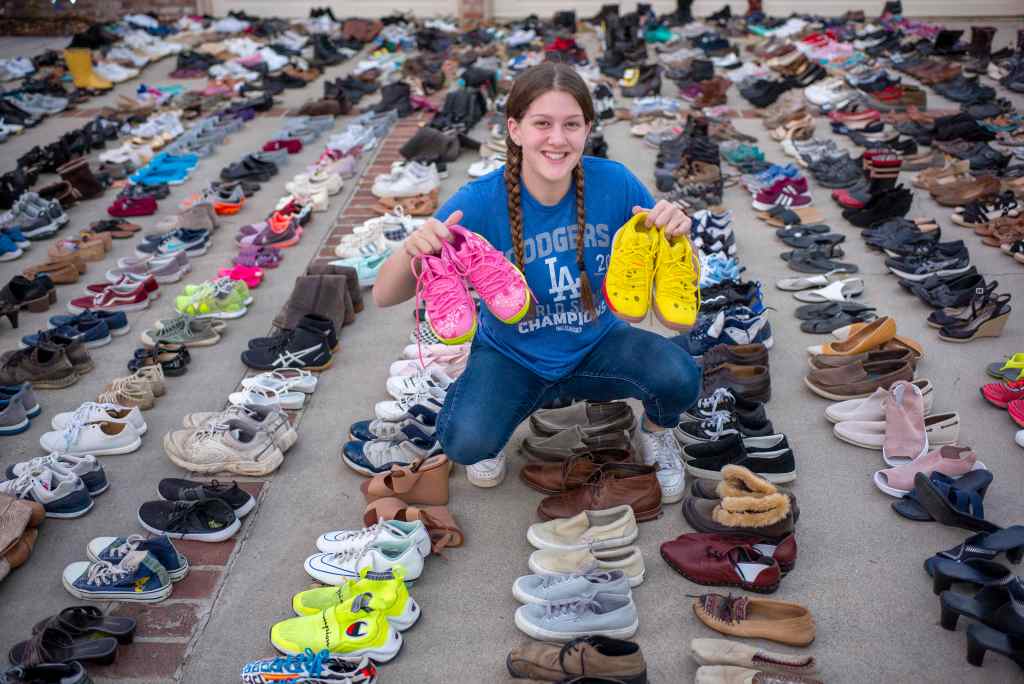 As a youngster, Lindsay Sobel realized she can give those shoes of yours collecting dust in the back of your closet a new lease on life.

The idea of collecting gently worn donated shoes and giving them to the homeless grew out of her family garage when she was 13 years old and needed a community project to meet the requirements of her Bat Mitzvah, a religious initiation ceremony for a Jewish girl.

Between her, her younger twin siblings and their parents they had amassed 30 or 40 pairs of shoes that were just sitting there doing nothing.

And that’s how Shoes For Souls was born.

“I wanted to do something that would have a long-lasting impact that I could do for a number of years and then pass on to my younger sister and help as many people as possible,” Lindsay said, adding the family’s shoes were ones they kept but never wore anymore and realized there are probably other families just like them.

Four years later, Lindsay, who was named 2017 Chatsworth Youth of the Year, has collected around 30,000 pairs of shoes city-wide and sees that the homeless are walking in them.

She and her family rent SUVs and literally goes from porch to porch in a caravan picking up the donated shoes and distributing them among two nonprofits, shelters and various city parks where homeless shelters have been set up.

In April, she reached out to her club volleyball team, CITY Volleyball Club, and in one day picked up 2,000 shoes from 50 home porches city-wide.

Then on Nov. 29 in a caravan of three cars driven by her mother, her father and her grandfather, the Sobel family collected 1,100 women and men work shoes, daily wear shoes, women’s heels and workman boots donated by Chatsworth and Porter Ranch residents. That batch is earmarked to go to Shoes for the Homeless, Inc., a public benefit company committed to providing shoes to those in need in local communities throughout the United States.

“This morning we laid out every single pair of shoes on our driveway,” she said on Dec. 4. “We see what types of shoes we have and based on that we determine where we will donate them.”

She admitted sometimes she has to throw away a pair or two that are worn down, a very small percentage of what’s donated.

“I’ll get a pair of heels without a heel,” she said. “I want to try to give the best experience to all the people. I don’t want to give them a pair of shoes that are … worn down. I don’t want them to think that’s their self-worth. If I would wear them, I keep them. If I wouldn’t, they aren’t acceptable enough to give.”

In the early days a major bulk of the donated shoes came from families at Sierra Canyon School in Chatsworth, co-founded by her grandfather and where she attends and her father is the assistant athletic director.

“As a 13-year-old I was like shoes?,” she said. “Everyone has them. It’s something we use every day in our life and I never realized so many people live without them and it’s such a necessity. Sierra Canyon is like my family to me and I could depend on them to help me with this charity.”

But when that source dried up this year with the onset of the coronavirus, she turned to Nextdoor, the social networking service app for neighborhoods.

Lindsay considers herself blessed in what she has chosen to do for the homeless, because she has a constant source of people who donate.

“The challenge for me is that there are this many homeless people right now and the challenge for me is how can I help as many of them as possible,” she said. “Being able to see the work that I’m doing really pay off and help so many different people …  when I went to the Long Beach Mission it was a chance to see who I’m giving the shoes to in person. I felt pretty good about myself and great about the community. It also makes me sad to see how big it is and how many things really need to be done.”

Her father, David Sobel, said the most important thing he has learned through his daughter’s journey is that even though society can be divided at times, when there’s a need Los Angelenos from many different backgrounds have recognized homeless issues and are ready to step up to help.

“We all take for granted the whole walking in shoes … and we are on our phones to see how many miles we walk in a given day,” the elder Sobel said. “We take for granted how much walking the homeless do in a given day and how important having shoes are to them. You try and walk barefoot without shoes for three or four miles a day and see how your feet are and your lower back.”

He thinks his daughter has learned a valuable lesson in philanthropy and can take it wherever she attends college.