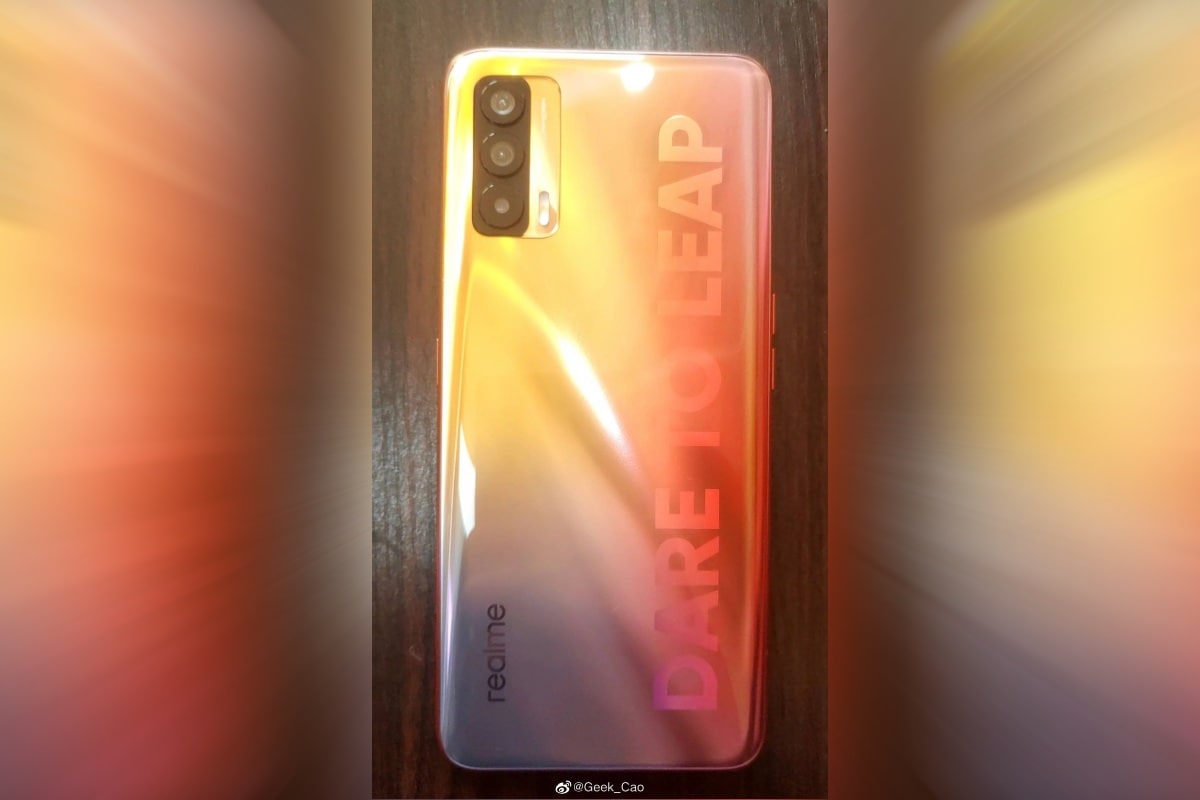 Realme Koi, aka Realme V15, specifications and live images have been leaked online. The new smartphone was recently teased to be part of an upcoming series from Realme that could also include a top-end model codenamed Realme Race. The latest revelation suggests that the Realme Koi could be a new mid-range phone in the series and feature a triple rear camera setup, as well as a gradient back with the ‘Dare to Leap’ tagline. The Realme Koi has also been tipped to get fast charging support.

Tipster Abhishek Yadav tweeted the details of the Realme Koi along with a couple of live images of the device. The phone is expected to be either called Realme Koi or Realme V15, which could be different for different markets. The leaked images suggest that the phone could come with triple rear cameras along with an LED flash. It also appears to have a gradient finish similar to that on the Realme X7 Pro and the Realme Q2.

In terms of specifications, the tipster suggested that the Realme Koi would come with a MediaTek Dimensity 800U SoC and feature a 64-megapixel primary camera sensor. The phone is also tipped to have 50W fast charging support and weigh 176 grams. Realme is also likely to offer an in-display or side-mounted fingerprint sensor on the new model as the leaked images don’t show a fingerprint module at the back.

Realme has not provided any official details about the Realme Koi except a teaser image on Weibo last week that carried the Koi name. The teaser also suggested that the phone could be among the upcoming models in the company’s new series that is likely to include a flagship with Qualcomm’s Snapdragon 888 SoC.

But contrary to the above-mentioned leak that speculates the Realme Koi to be a mid-range phone in the upcoming series, some other rumours on Weibo suggest that the phone could be launched as a flagship phone and come with features including 125W UltraDART fast charging. It is also speculated to have a special edition with a leather back. We’ll clearly have to wait for more information to ascertain how the Realme Koi, aka Realme V15, will be positioned in different markets.

Is OnePlus 8T the best ‘value flagship’ of 2020? We discussed this on Orbital, our weekly technology podcast, which you can subscribe to via Apple Podcasts, Google Podcasts, or RSS, download the episode, or just hit the play button below.

Steve Buscemi Signs With UTA
Luke Bryan Apologizes For Dustin Lynch Intro At Crash My Playa: “Complete Sarcasm… Those Words Were So Absurd”
Randall King Hits The Honky Tonk With His Lady For New “You In A Honky Tonk” Music Video
Shantaia Rides Away From Heartbreak In ‘Know You’ Music Video
Google Pixel Tablet Image Leaks Online; Suggests Only One Model May Be Launched