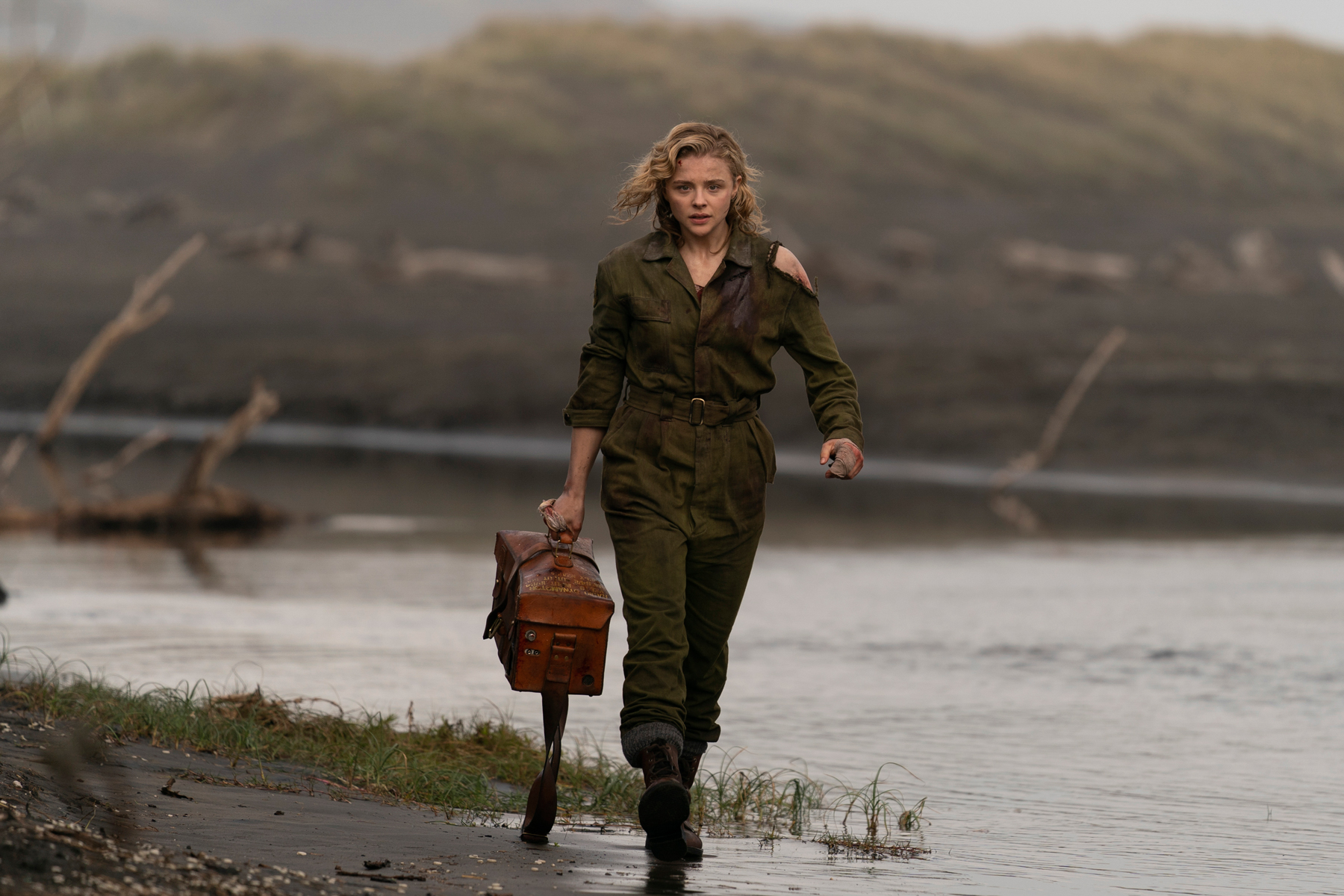 It’s 1943, World War II continues to rage across the Pacific, and on an airfield in Auckland, New Zealand, and RAF Flight Officer Maude Garrett (Chloë Grace Moretz) needs to get on a flight ASAP. The Women’s Auxiliary Air Force pilot is carrying a package with her that contains something filed under “strictly classified,” and paperwork that should allow her safe passage anywhere. Neither of which particularly endear her to the crew of “The Fool’s Errand,” a B-29 bomber headed to the Samoan Islands. The reactions to this last-minute passenger range from hostility to sexual harassment; only Staff Sergeant Walter Quaid (Taylor John Smith) shows a sliver of kindness. He even offers to watch the fragile cargo while she’s consigned to the plane’s bottom gun turret “for her own safety.”

It’s not the vulgar come-ons and blatant misogyny that Garrett’s hearing over the radio communications in her tiny travel arrangements that have her worried. There are a few things that seem a little off about this flight. Like, for example, the loose hydraulic cable she noticed before she jumped on board. And the small sliver of the windshield that’s been broken in the turret. And also the fact that there’s a gremlin scurrying along the bomber’s underside. That 1940s Warners-style cartoon we saw earlier said that these bat-like creatures are merely the figment of goldbricking soldiers’ imaginations, but to be honest, the one who is tearing away at bits of the fusillade seems pretty real to Maude ….

For a good portion of its first half, director/co-writer Roseanne Liang’s oddball mash-up of Twelve O’ Clock High and a classic Twilight Zone episode makes the most of its mystery (what the hell is inside that package?) and claustrophobic setting, trapping Moretz’s heroine in a confined space while a grotesque beast slowly turns this plane into a floating fortress of death. What’s unsettling isn’t just that her officer has to fend for herself as a furry, ferocious and wildly resourceful rodent slowly dismantles everything around her, but how this “dame” is consistently dismissed, dissed and disbelieved because she’s a dame. None of the crew take her early warnings about weird occurrences, unexplained gear malfunctions and a sighting of Japanese fighter plane not long after they leave the base seriously. None of them even believe she’s a pilot. Her assertions that some thing is wreaking mayhem right under the cockpit’s nose is considered the ramblings of a lunatic. “Hysterics” is thrown at her more than once. The extended suggestion that Maude’s nightmare at 20,000 feet here isn’t a gremlin but the near-constant threat of gaslighting is wielded like a blunt instrument, which doesn’t mean it’s not still effective. (It’s also ironic, considering that the film’s cowriter is Max Landis, who may understand a thing or two about this concept.)

The men eventually come around — too late,  naturally — and we eventually find out the secret inside that carry-on she’s so concerned about, at which point Moretz is allowed to go full Ripley-meets-Rosie-the-Riveter and Shadow in the Cloud turns into a semi-baked genre casserole. What it loses in teased metaphor and tension once some of the cards are turned over, the film more than makes up for in outlandishness; there’s a set piece involving a chaotic life-or-death struggle outside the bomber that goes from sweaty-hand harrowing to sublime to are-you-fucking-kidding-me ridiculous in seconds flat. Prospective viewers may want to preemptively put on a neck brace, as this sort of whiplash effect quickly becomes par for the course.

From that point forward, you either fully give in the facepalm-friendly vibe of this frantic film’s horror/war flick/Perils-of-Pauline pulp or you don’t, though the second option shouldn’t stop anyone from appreciating how comfortable Moretz still is as an action hero all these years after Kick Ass. It begins a VOD/digital run on January 1st, and while this mix of thrills, chills and eyeroll-inducing WTFs is an inauspicious way to start a moviegoing year, it’s the type of viewing lark that works best through the haze of a long day’s journey into last night’s hangover. It isn’t bad. It should be better.