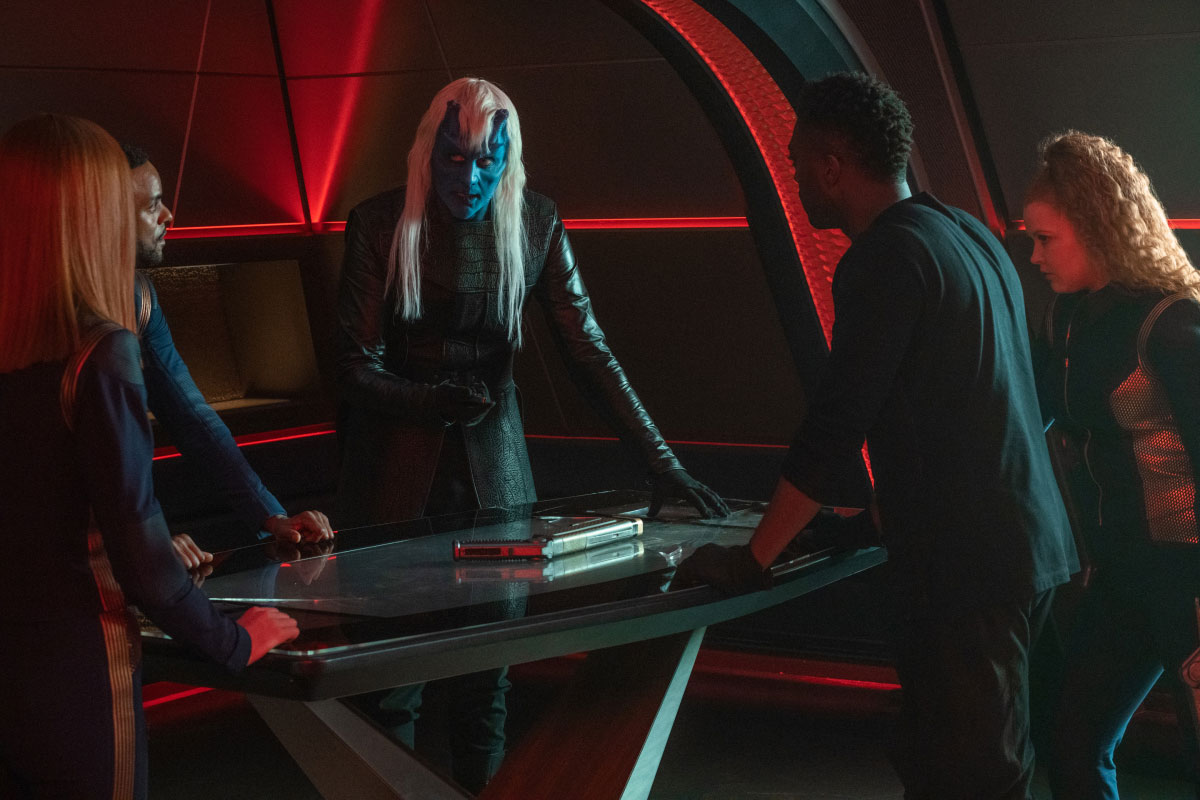 The penultimate episode of Star Trek: Discovery Season 3 is an intriguing mix of action and politics as Michael and Book infiltrate the stolen Discovery and Osyraa takes ship straight up to the Federation Headquarters’ front door in order to make an unexpected offer to Admiral Vance.

“There is a Tide…” turns out to be a rather surprising hour, spending less time on Michael and Book’s undercover rescue antics and instead asking thorny moral questions that it’s not entirely clear that the season has earned the right to ask. Or that it’s capable of answering in the single episode remaining to it.

That said, things certainly went in an unexpected direction. Generally speaking, I like my Star Trek messy and almost always prefer it when the lines between the good and bad guys aren’t necessarily clean ones. “There is a Tide…” gives us that in spades, though it doesn’t go quite far enough. (At least not yet, anyway.)

In an interesting move, the hour completely focuses its narrative on the stolen Discovery and its kidnapped crew. While Saru, Hugh, and Adira are mentioned multiple times, we don’t see then, or get any update on what’s happening with Su’Kal.

Given on much is happening at both Federation headquarters and on board the Discovery itself, this is probably the correct choice. And by keeping the action centered in one location, it puts Osyraa’s ultimate plan center stage, which is quite a bit more complicated than most of us (or at least me at any rate) likely expected.

Yes, Osyraa’s brutal Emerald Chain syndicate has spent the bulk of the season causing problems on vulnerable worlds in pursuit of their own profits, imposing enforced labor, debt slavery and other atrocities on their populations. Now, apparently, what she really wants is the veneer of legitimacy: A union with the Federation.

The episode does its best to suddenly give Osyraa the layers the rest of the season has largely denied her. No longer just a colorful space pirate, she’s suddenly doing despicable things in the name of some nebulous greater good and preaching about helping the people still struggling in the wake of the Burn. This probably would have been more believable if Discovery had let us see Osyraa’s point of view or ever presented her as anything other than a bully out for her own ends.

There’s a version of this story that really would have worked, too – one where this episode actually offers a surprise glimpse into Osyraa’s humanity instead of the self-delusion of those that follow her. A story in which she turns out to be at least vaguely conflicted about some of the things she’s done or that makes the argument that when faced with difficult choices, she ultimately picked the option that kept the greatest number of people alive. One where she expresses some form of regret that The Chain’s actions have not been without great cost to the very people she’s purportedly trying to save.

In that story, we all might be weirdly hopeful that her offer to the Federation is genuine, an end of season twist that puts Osyraa in the role of an antiheroine rather than an outright villain and complicates the resurrection of the Federation and Discovery as a series for seasons to come.

That is…not what happens. Instead, it appears as though Osyraa is simply another C-list wannabe despot who just wants to gain access to larger markets while avoiding accountability for the many terrible things she’s done to those with less power than she has. Granted, she’s hardly the first leader who talks about helping the less fortunate but turns out to be interested in little else beyond her own power. But I wanted her and her Emerald Chain to be something different – something more meaningful and more complex than it appears they are.

As a franchise, Star Trek is uniquely positioned to wrestle with complex moral issues and difficult choices. How much should we allow ourselves to interfere with other cultures or civilizations? How do we define what beings deserve the right to their own self-determination? Do the needs of the many really always outweigh that of the few?

“There is a Tide…” deals with slightly smaller, but no less significant concepts. Do the ends truly justify the means? If Osyraa is a monster, but allying with her and The Emerald Chain would vastly help improve the lives of potentially hundreds of millions of people, isn’t that a choice the Federation should seriously consider? Would it have made for a better story here if they did?

Elsewhere, the episode’s overreliance on Michael Die Hard-ing around the ship to save the day is as tiresome as ever, particularly because for much of the hour it doesn’t really show us much that feels new. Until it does.

Her episode-ending confrontation with Stamets, in which she not only knocks him out with a Vulcan nerve pinch, she jettisons him off Discovery against his will so that she can prevent Osyraa from accessing the spore drive is not just a boss move. It’s also the completely correct decision, even if it’s one that betrays one of her dearest friends and may leave several others to die. (It probably won’t though, and we all know that. But as a thought experiment, it’s certainly an interesting one.)

Anthony Rapp sells the heck out of Stamets’ terror for his family that’s trapped on a radioactive hell planet, and his furious declaration that the Discovery crew all chose to come to the future with Michael so she didn’t have to be alone lands pretty hard. This is such a group of do-gooders and try hards that of course none of them are going to tell Michael to her face that they resent her for the choice she forced them all to make, though they all must at least a little.

Needs of the many and all that, right?

On paper, Michael’s decision here is the right one as well. But what will it cost this time?

Was there someone out there who was desperately hoping to see Zareh again? That person is definitely not me. Talk about a one-note bad guy.

Loved Stamets referring to Adira as his child. Their relationship is so different and sweet.

Thankful that Book actually checked to make sure that Grudge was secure and safe before launching his ship toward possible death again!!

Yes, I rolled my eyes at the conveniently appearing Sphere data turned wide-eyed adorable robots determined to help the Discovery crew take back the ship. But, OMG, they’re so cute.

Johnny Depp Signs New Deal With Dior To Come Back as Face of Sauvage Cologne
‘Top Gun 2’ Becomes 7th Highest Grossing Film Domestically Over ‘Titanic’
Boris Johnson will not intervene in cost of living crisis as that is ‘for future prime minister’
Slack Resets Passwords After a Bug Exposed Hashed Passwords for Some Users
PRH WTF: The Weirdest Quotes From the Penguin Random House Trial