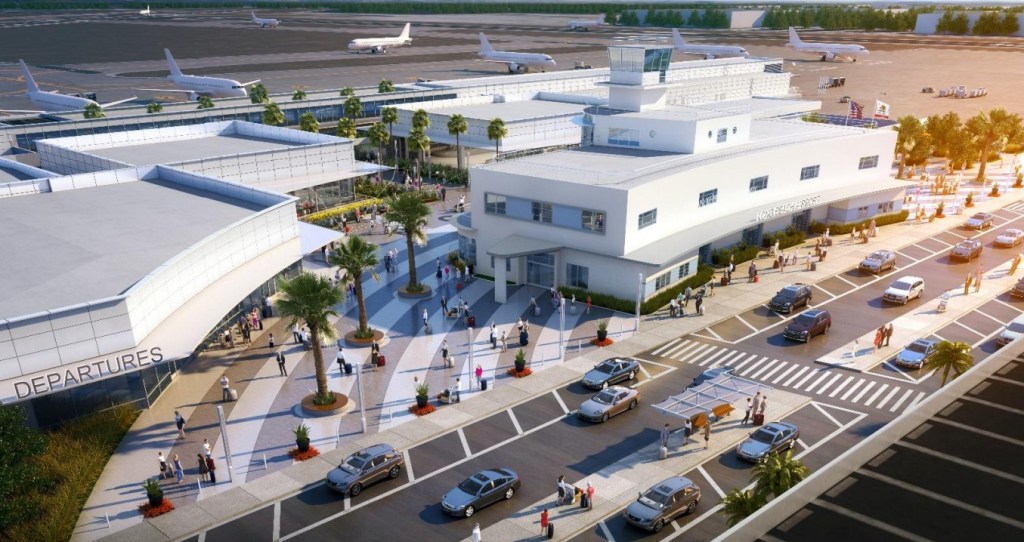 The coronavirus pandemic has had big impacts on operations at the Long Beach Airport — so big, it seems, that it’s unclear if long-planned construction projects, like a new ticketing lobby, will be able to move forward.

Airport Director Cynthia Guidry wrote in a recent memo that while work on a new ticketing lobby continues for now — with underground utilities and a foundation slab set to be completed by the end of March — “it is unclear if it is financially prudent to continue with the rest of the Ticketing Lobby.”

Work on the new ticketing lobby is part of a $110 million project to modernize the Long Beach Airport. The program also calls for:

In 2018, when the program was first approved, city staff estimated all of those projects would be completed by 2021. But Guidry told the City Council this past May that, because of the pandemic, the airport extended the timeline for the projects and would continue evaluating their feasibility as the public health crisis — and its associated recession — lingered.

And Guidry wrote in her Dec. 21 memo that the short-term financial future of the Airport still remains unclear. While passenger traffic has steadily increased since it bottomed out in April, the current level of commercial activity is only 20% of where it was at this point in 2019, she wrote.

The Long Beach Airport received $18.4 million from the federal CARES Act in May, which Guidry said helped offset the drop in revenue. But the facility has now “nearly expended the much-needed grant,” she wrote.

Because of the uncertainty, Guidry wrote that her staff continues to weigh the risks and benefits of moving forward with major projects.

Before the pandemic hit, construction had already begun on the new checked baggage inspection facility and on the new ticketing lobby. The start dates for the remaining projects, meanwhile, have been pushed back.

Work on the checked baggage inspection facility can continue, Guidry wrote, because it is primarily being funded through a TSA grant. It’s set to be “substantially complete” in late 2021, the memo said.

Continuing on the ticketing lobby past its current construction phase, though, could pose more of a financial risk for the airport.

The city’s contract for the work includes “exit ramps” in which Long Beach could cancel uncompleted work with a penalty of 1.5% of the estimated value of the work. Currently, the remaining work is estimated to cost $16 million, meaning Long Beach would pay $240,000 to cancel the rest of the contract. If the city chooses to continue on the project, the facility would likely be complete in early 2022.

Guidry, in her memo, did not make a recommendation either way. She wrote that “the next several months will help inform the Airport’s ultimate recommendation for the Ticketing Lobby and the remaining four projects.”

She said she hopes to be able to come to the City Council with a proposed direction on how to proceed, she wrote, by April.