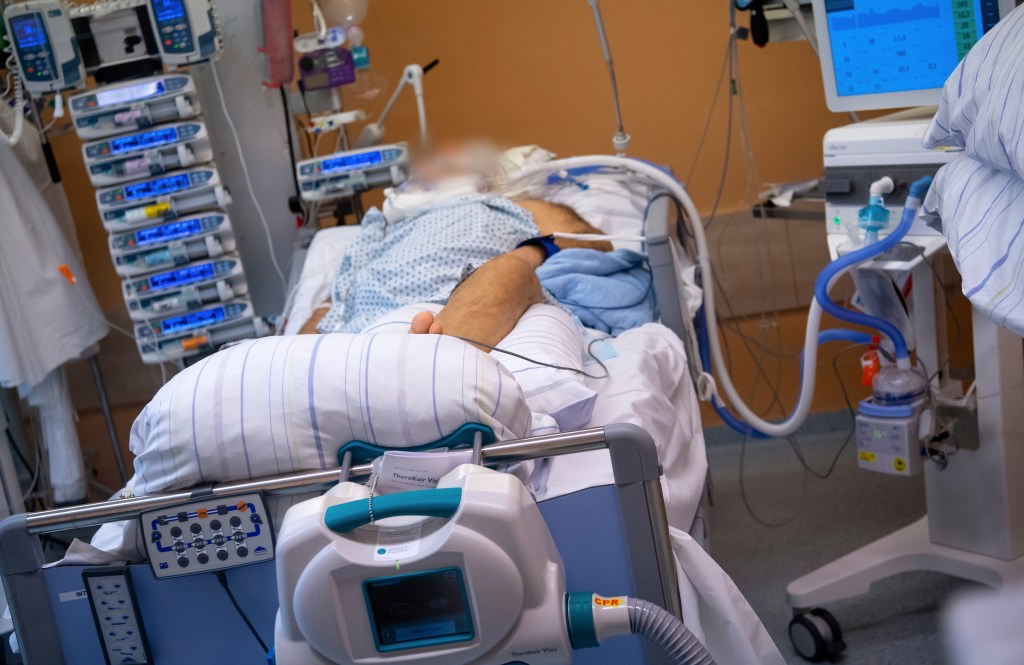 UPDATED with latest: Friday was by far the deadliest day of the pandemic in California. On Wednesday, California saw a frightening new high of 432 Covid-related deaths. Thursday’s number dipped slightly to 428. On Friday, the number of lives recorded lost to the virus rocketed to 585. That’s a 37% rise in one day.

Some of the deaths were from a data backlog due to an L.A.-area Internet outage and the holidays, but that asterisk has been applicable every day this week. For comparison, the 7-day average of deaths was 239 on Wednesday.

According to its data dashboard, the state saw 47,198 new infections on Friday. As with Los Angeles County, that number represents a rise from generally much lower daily cases the past two weeks. The fear, of course, is that the rise could be related to gatherings and travel over the holidays. It could represent the beginning of a new, unparalleled surge.

The number of virus-related hospitalizations was very near the all-time high at 21,433.

PREVIOUSLY on Wednesday California Governor Gavin Newsom spent much of his Wednesday Covid-19 briefing discussing new plans to reopen schools. But amidst those details, he also reported the news that the state had recorded a shocking 432 Covid-related deaths over the past 24 hours.

For comparison, the already very high 7-day average of deaths was 239 on Wednesday. The previous daily record in the state was 379 deaths on December 16. Even more shocking, on November 30, the number of daily Covid-19 deaths was 70. So Wednesday’s number represents a mind-numbing 617% increase in the past 30 days. Over 14 days, announced the governor grimly, “that’s 3,477 lives lost.”

For those who early in the pandemic maintained Covid-19 was little more than the flu, 3,477 deaths represents more than 50% of California’s typical number of deaths from the flu in a year when the flu was widespread.

Newsom announced 30,921 new cases of Covid-19 had been identified in the state on Wednesday. He noted that number reflected a “plateauing we’re seeing outside of L.A. County, outside of Southern California more broadly.” L.A. County, of course, remained the epicenter of the virus in the state and possibly the country.

California’s test positivity rate in the state was 12.2% over the past 14 days. Newsom said, “There is now some evidence that that number is plateauing, as well,” but cautioned against putting too much faith in that dip.

He said there were over 20,000 people hospitalized with Covid-19. “You’re beginning to see that number decline modestly statewide,” he added.

The problem area — in addition to deaths — is in state ICUs, especially in the Central Valley and Southern California. “That’s our focus,” said Newsom.

While the diminishing daily case numbers do indicate the dreaded Thanksgiving surge may have worked its way through the state, CA’s Director of Health and Human Services, Dr. Mark Ghaly, indicated the state may not yet be seeing the light at the end of the tunnel. Health officials are still worried, “not just because of thanksgiving,” said Ghaly, “but now because of Hanukah and Christmas.” If those holidays saw an equal or greater amount of travel and household mixing, the worst may be yet to come.

In fact, the state’s own modeling predicts California will see a 100% increase in total hospitalizations by January 29 and a 60% increase in Covid-19 patients requiring ICU care.

You can watch Governor Newsom’s news conference below.

Grand Ole Opry Unveils First Redesigned Stage In Over 20 Years With Performances From Jon Pardi, The Oak Ridge Boys & More
Watch Chris Stapleton & Dwight Yoakam Cover Of Ray Charles & Willie Nelson’s “Seven Spanish Angels”
The State of Diversity in the Publishing Industry
Liz Truss rules out future PM bid but ‘doesn’t regret’ her short time in No 10
Westminster’s ‘nepo babies’ are here to stay – whether we like it or not | Adam Boulton