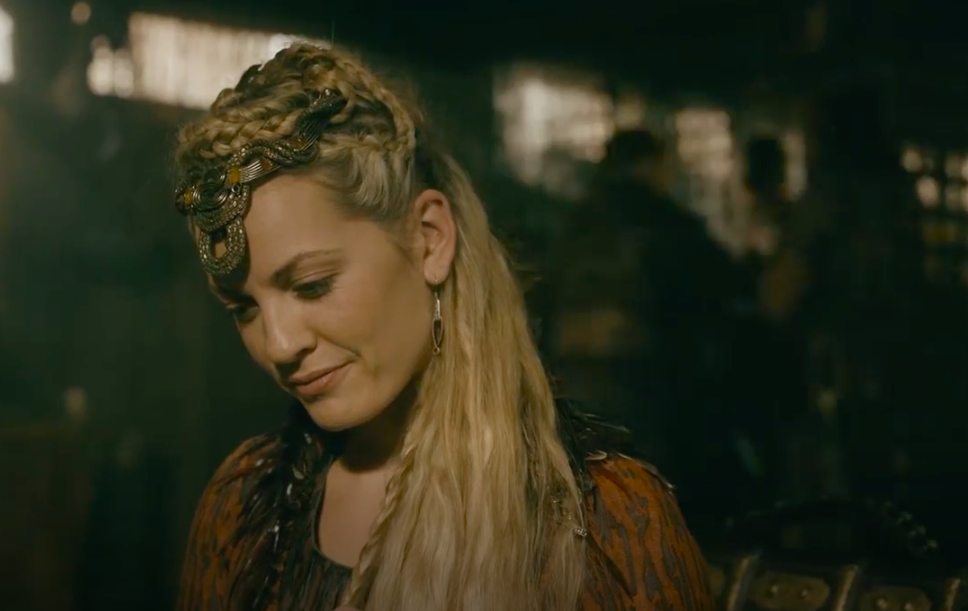 “We all have a duty to preserve the old ways.”

Nearing the end of its six season run, the series penultimate episode “The Lord Giveth . . .” sets up a fascinating dynamic for the final chapter in Michael Hirst’s history based drama Vikings, but it’s the return of an old friend that brings an emotional close to an episode that otherwise finds warring sides in Wessex and Kattegat jockeying for position. Yes, Floki’s back and will hopefully have many stories to tell.

The cold open picks up where the previous episode leaves off, and we receive the hoped for result – the native tribe does its best to welcome Ubbe, Torvi, and the others despite the expected communication difficulties. Of course, we wonder whether these are the first Europeans with whom the tribe has made contact, but Hirst brilliantly sets the stage for the episode’s final reveal. While the exchange of gifts is a nice touch, it’s the watershed moment when Torvi hands baby Ragnar over to one of the Native American women that makes the most impact. These are clearly warriors, but interestingly, appear to be led by a woman which must provide some level of comfort for the shieldmaiden Torvi.

With all the chaos swirling around Wessex and Kattegat, it seems Ubbe and Torvi have finally found the peaceful life they seek, and though there will clearly be obstacles, who better to help them navigate choppy waters than the pre-eminent boat builder Floki. But before learning of his existence here, we’re treated to a wonderful scene as the men share weapons and skills. Though no one makes mention of it initially, Ubbe recognizes certain Norwegian words and phrases that can only mean this group has made previous contact. That said, once we hear the words “crazy man” to describe the source of this language, the realization that Floki may be alive suddenly becomes possible.

Hirst does insert an element of potential conflict when we witness one of the Vikings insist that one of the young native men show him where gold can be found. Once a Viking always a Viking, at least for this guy. Still, it sets the stage for potential conflict between the two groups who have made it clear they’re willing to live together in peace. With the experiences of Iceland and Greenland behind them, hopefully, cooler heads will prevail, and Floki can provide a link between the two cultures as well as one to the man ultimately responsible for this moment, Ragnar Lothbrok.

Turning our attention to Kattegat, it’s difficult to criticize Ingrid’s actions here as she sets out to fill the power void King Harald leaves behind when he goes to war in Wessex. Her actions are no more or less reprensible than those carried out by the other earls, lords, and kings, but because she’s a woman, a different standard applies. That she’s also a powerful witch obviously plays a role here, but like Floki, it’s her devotion to preserving their religion in the face of encroaching Christianity that sets her apart. Ingrid tells Erik she’s dispatched assassins to take out a neighboring king who has converted to Christianity, an obvious precursor to his later ploy to remove her from the equation. Still, it’s this sincere devotion to the gods that keeps us in her corner despite the moral challenges she confronts.

We don’t for a second believe that Erik’s slave will successfully carry out the assassination of Ingrid, and when his wife affirms that “we’ll do it together,” the scene that follows assures us that this mission will fail. Poison? Stabbing? They come across as the amateurs that they are, but the final twist cements Ingrid’s grasp of the crown that becomes available upon Harald’s death on the battlefield. Ingrid makes a show of the slave’s death, but it’s the wife’s pitchfork to Erik’s chest that provides the most satisfaction. So much for marital loyalty.

While Ingrid’s hold on Kattegat’s crown remains in its early stages, Alfred must now face off against Ivar and the Viking hoard if he hopes to save Wessex from being overrun once and for all. Religious imagery appears to great effect throughout, and as the men march into position, the large wooden cross they carry topples over issuing a portent of doom in the battle to come. However, it’s the fog and mist that symbolically obscure the battlefield, preventing both the audience and the participants from seeing the inherent truths of this conflict. While it appears Ivar holds an advantage as the armies regroup, that’s far from a sure thing.

As usually occurs when Ivar takes an army into battle, the intricacies of the plan speak to his strategic acumen, but here his success depends on Alfred acting like the Alfred he knew as a child, one unwilling to make sacrifices. The nine minute battle sequence, long even by Vikings standards, doesn’t bring us anything new, but does contain several pivotal incidents within the greater whole. Elsewith’s confidence in her husband flags as the conflict gets underway, and while she makes solid points, when Alfred takes a sword to the shoulder, his two-fold reaction sets a path for the battle’s next stage.

Hirst makes a point of accentuating Alfred’s physical limitations, so when he removes the sword from his shoulder and stands tall amidst the chaos, we see a young king take a bold step toward greatness. Nevertheless, it’s what happens next that dramatically changes the tenor of the battle. To this point in the series, the supernatural has found its footing on the Viking side of the narrative, but as he stands gravely wounded on the battlefield, Alfred glimpses the powerful image of a crucified Christ and takes it as a sign from God that they will vanquish their Norse foe. Whereas Ivar makes his decisions more intellectually, Alfred goes on his instincts, and rather than make the wiser decision to retreat and regroup, he orders his men to charge. It’s a bold move whose success is still to be determined, but this is not the same man who began the day listening to his wife’s admonitions.

While one king forges ahead, Harald finally gets what he’s wanted for some time now. Narrative tropes sustain themselves either through lazy writing or the recognized ability to achieve continued success influencing the audience’s emotions. Harald has dropped hints that he’s ready to join his brother in Valhalla, and when he’s seemingly killed by one of Alfred’s officers, his vision of Halfdan gives the brothers a chance to finally reconcile through death. Some genre television fans refer to it as the “Prince Oberyn Blunder,” and its effectiveness depends on our connections to the characters involved. Here, its use falls a bit flat. We neither love nor hate Harald at this point and have no investment in the Saxon soldier he ultimately kills. Still, when the Saxon taunts the fallen king, there is a sense of contentment when Harald’s last gasp centers on a dagger to the man’s throat.

We’ve reached the end of the road with Vikings, and how much resolution we get in the series’ finale remains to be seen. If history is any indicator, fans of the show will be divided at its conclusion, but “The Lord Giveth . . .” sends us forward with mixed feelings. At the end of the day, Ubbe correctly notes “This is our story.” Whose god will prevail?