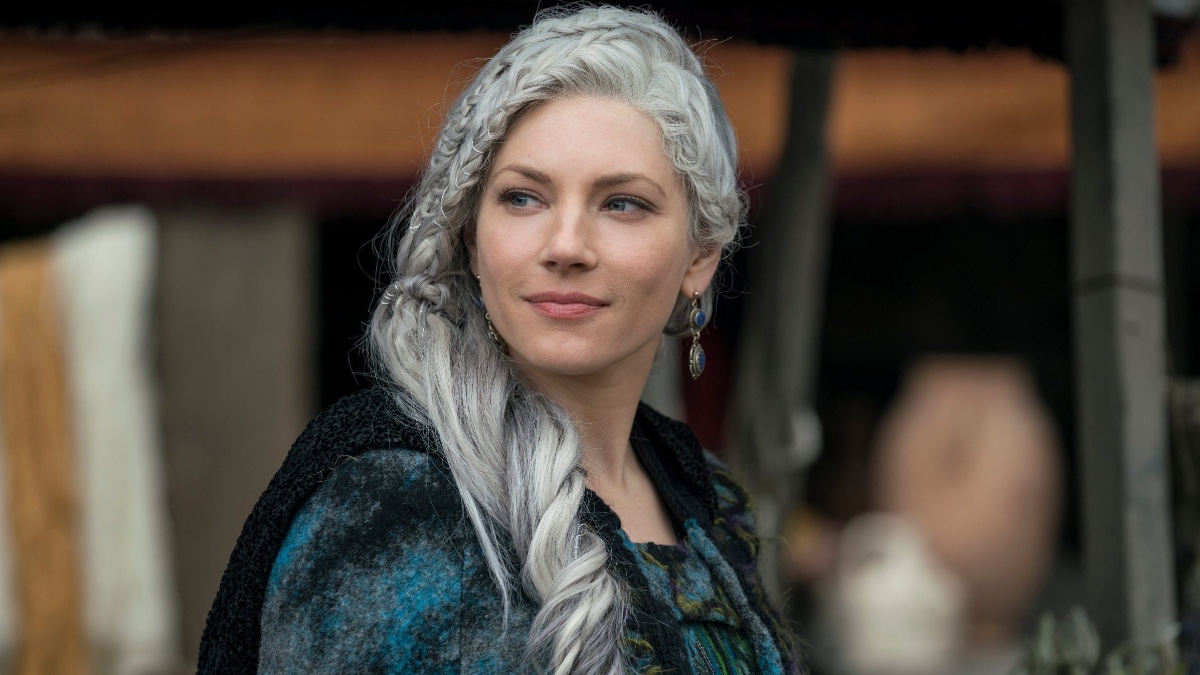 With the release of season 6 part two on Dec. 30, Vikings has come to an end. While the spinoff Vikings: Vahalla is set to premiere on Netflix sometime in 2021, it will pick up the story of the Viking and Anglo-Saxon conflict 100 years after the last events depicted in the original series. Thus the series finale of Vikings means we are saying goodbye to all the characters whose exploits viewers have enjoyed these last seven years. Whether in the flesh or in flashbacks, this is the final farewell. And no character will be missed so much as Lagertha.

When Vikings began, in the spring of 2013, it was a largely misunderstood enterprise (and still continues to be, by some). Premiering as it did on the History Channel, a cable channel best known for its WWII/Hitlerian focus in the 90’s and more current shows like Pawn Stars and Swamp People, many assumed that Vikings was a testosterone-heavy fight-fest created to feed the key male 18-49 year-old demographic that the network targets.

But that was never really the intention of creator/writer/showrunner Michael Hirst. As Hirst tells Den of Geek, women, particularly Viking queen Lagertha (Katheryn Winnick), were always supposed to be central in the series’ storytelling.

“I was hoping she would be popular,” Hirst says. “History Channel is a male-viewed channel. And I think History Channel initially picked the show up because they thought it would appeal to that natural base. That they thought, ‘Well, you know, it’s obviously going to be a show full of battles and fights and so on.’ But I always thought it was going to be about Lagertha as much as Ragnar. And I like writing with women.”

Hirst’s focus paid off. Women, like myself, eventually found (generally through word of mouth) the series, and we loved what we saw. Lagertha and the rest of the women on the show were more than pretty faces and eternal victims. They ran the gamut from the initially innocent and oppressed Anglo-Saxon Judith (Jennie Jacques) to soft-power-wielding Gisla (Morgane Polanski) and Aslaug (Alyssa Sunderland) to shield-maidens like Torvi (Georgia Hirst) and Gunnhild (Ragga Ragnars).

But it wasn’t simply the variety of types of women on the show. It was that none of them were ever simple and they were never just plot devices. Whatever label their cultures applied to them, they have always exceeded them. The women of Vikings have been spouses, parents, politicians, strategists, lovers, and friends—everything that their male counterparts were, and often more successful in their endeavors than those men. It was surprising, and on a show like Vikings, something rarely seen on American television.

And Lagertha—farmer, visionary, wife of Ragnar, mother of Bjorn Ironside and Gyda, shield-maiden, Jarl and Kattegat’s queen in her own right— was the first among the women we tuned in to watch. Which pleased her creator.

“What was wonderful for me was that the show, on History Channel, was getting 50/50 male/female viewership,” Hirst says. “In other words, particularly Lagertha was making women watch the show. And it was about so much more than fights and battles and things. So I was really proud of that. And I think that Katheryn was just brilliant in the role.”

And she has been. Appearing in over 80 episodes (and directing season 6A’s “Valhalla Can Wait”), Winnick shows up more than any other actor, and helped the show bridge the gap when Hirst’s other primary antagonist, Ragnar, was killed off. Doomsayers predicted the end of the series after the departure of Travis Fimmel’s excellent Viking legend. But Winnick and Lagertha went a long way in ensuring we continued to stay engaged and tuning in.

Not that everyone was pleased. From the start, there has always been some Internet criticism of Lagertha that accuses the character of “forced feminism,” ahistorically expansive sexuality, and the impossibility of the existence of actual “shield-maidens.” Some have even argued that women do not possess the physical strength to wield historically accurate Viking weapons (despite watching female actors, Winnick and Georgia Hirst specifically, regularly do just that on Vikings on a regular basis).

In fact, Lagertha appears to be closer to the truth than even many historians assumed when the show began seven years ago. According to the series’ historical consultant and writer Justin Pollard, not only was “Viking society, for all of its apparent terrors to Christians, a much more egalitarian society than Christian society, and women had a much stronger role in it,” but despite “quite a lot of howls of complaint, since then, we’ve found a number of excavated bodies, often excavated in the 19th century, that have been reanalyzed and now been shown to be women.”

The most famous of these is the grave of what many historians had referred to, up until 2017, as the archetypical “ultimate Viking” of the tenth century, found on the island of Birka, Sweden. First discovered and documented in 1878, it was assumed to be the skeletal remains and grave items of a male warrior—sword, spear, axe, arrows, shields, etc. One year after Vikings premiered, an analysis of the pelvic bones and jaw by bioarchaelogist Anna Kjellström strongly suggested that the skeleton was that of a woman. In 2017, analysis of the DNA and Strontium isotypes on the skeleton by a team led by Charlotte Hedenstierna-Jonson confirmed that the body was a woman, and consistent with the geographic profile of someone having lived in the correct place to be a Viking.

Lagertha, and women like her, weren’t a modern-day invention—Hirst’s women warriors were a strangely prophetic echo from the past.

Nor are women incapable of the type of fighting we get to watch on the show. I brought up the point when I interviewed Clive Standen (Rollo) a few years ago, asking whether it was odd having Winnick, who stands as much as a foot shorter and weighs half as much than many of her male co-stars, on the battlefield. He laughed outright, assuring me that the actress, who holds black belts in two martial arts and founded three martial arts schools before the age of 22, is more than a match for those her character faces on the killing fields of Vikings–a not inconsiderable recommendation considering Standen’s own martial arts background. In other words, what we saw on the series was just as, if not more, real than the reality shows that make up a great deal of History Channel’s programming.

But whatever problems that naysayers may have had with the depiction of shield-maidens in general and of Lagertha in particular, her fans are legion and loyal. Word of her impending death began to circle as early as 2017. Article after article conjectured that she was always about to be killed off—even well past the point where most of Aslaug’s sons had given up their mission to avenge their mother.

So we had long been emotionally prepared for the death of the semi-retired Lagertha. That the means of her death was less glorious than the eventual end of her son Bjorn might have rankled had it not been so very much like the woman we have come to love. Both die in defense of their beloved Kattegat, but for Lagertha, the moment is about the heart of the show: family.

Vikings has always been less a historically-based action series and more a family drama told on an epic scale. And as it is as true now as then that rivalries and alliances, anger and empathy, misunderstanding and enlightenment, are constantly in flux in families. Lagertha has always had reason enough to hate her murderer. His birth alone might have earned him death at her hands. But like her equally illustrious partner Ragnar, she has never been as simple as the blood vengeance we traditionally and often erroneously associate with the Vikings.

Both are complicated characters, and capable of seeing the bigger picture when it comes to their family, to honor, to their fates. She recognizes that his actions are enough to rip apart the wounds only half healed among Ragnar’s sons. That she is able to comfort her own killer, to reassure him that he has done no more than live his destiny and hers, speaks to complexity and compassion all but absent in depictions of Vikings before the show began its run on History Channel.

And in that, Lagertha is precisely the embodiment of Hirst’s wish for the series:

“One of the things I most wanted to do was to overturn all the cliches about Vikings. I was told by some people at the beginning that I couldn’t really make a show about Vikings. Or, at least, I couldn’t make a show where Vikings were the heroes. Because they were always the Other. They’re the bad guys. They’re the people who come in the night and steal and rape and burn. And how could I make them heroic in any way? And of course, people thought they knew about the Vikings. Actually, they didn’t know anything, which is often the case. And so I thought, “Well, how do I show that?”

It turns out, you do it by creating a character like Lagertha. You do it by taking one of the most misunderstood members of a misunderstood culture and turn her into a hero who makes mistakes and silent sacrifices, enjoys triumphs and endures losses, bides her time and acts impulsively, regrets and doesn’t compromise, gives and takes, and loves and hates, and still goes on, even in death.

You make her one of us.

And that’s why we have loved her, cheered her on, cried over her pain, and now mourn her end. Because Michael Hirst and Katheryn Winnick made Lagertha someone we could recognize some modicum of ourselves in, creating a link between Vikings of the 9th century and our own 21st century lives. She reminds us that carrying a sword in battle isn’t what makes a hero. Heroes are so much more than that, and while we will never wield axe or spear, the heroic is always within our own grasp.

Elon Musk and Right-Wing Friends Do Us a Favor By Hiding Their Tweets
Chinese spy balloon flying over US airspace, says Pentagon
OnePlus 11 5G Price in India Tipped Again, Could Go on Sale Starting February 14
Warning: Hackers Actively Exploiting Zero-Day in Fortra’s GoAnywhere MFT
The State of Diversity in the Publishing Industry