The FTSE 100 has rallied sharply on the first day of trading this year as hopes over the impact of vaccine roll-outs trumped fears over more lockdowns.

London’s leading share index was up by as much as 3% or more than 200 points, pulled higher by commodity giants such as Fresnillo and Glencore which tend to track global economic sentiment.

The biggest riser was Ladbrokes owner Entain, climbing more than 20% after it confirmed a takeover offer by US casino giant MGM Resorts. 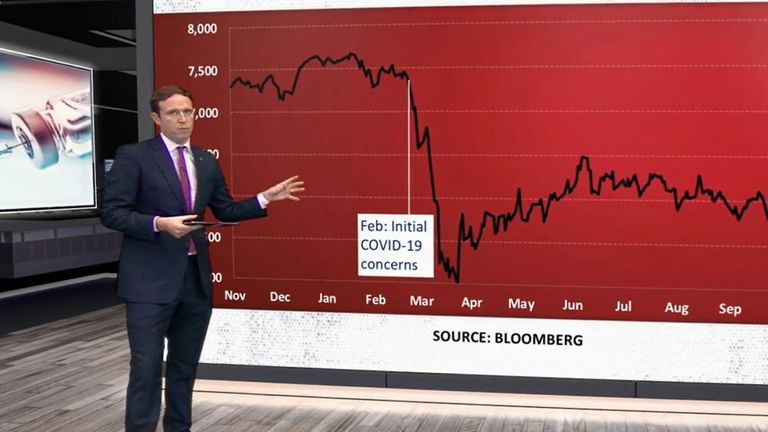 November: How the markets reacted to potential vaccine news

Markets were reopening for the first time in the new Brexit era after a last-minute deal between London and Brussels eased fears of a chaotic departure – though optimism was likely to have been tempered by fears of tightening COVID restrictions.

UK-focused stocks such as Natwest and Lloyds Banking Group as well as engine maker Rolls-Royce and house builder Taylor Wimpey were among the few FTSE 100 fallers.

The pound had a mixed start, climbing above $1.37 for the first time since May 2018 – versus a weakening US dollar – but dipping by nearly a cent to close to €1.11 against the euro.

“The FTSE 100 started 2021 with a bang,” said Russ Mould, investment director at AJ Bell, pointing to the impact of the start of the AstraZeneca vaccine roll-out as well as the Entain offer.

“For now investors clearly believe the vaccine will provide the catalyst for a big recovery, perhaps after a tough first quarter, but getting enough of the population inoculated will be a big logistical challenge,” Mr Mould said.

Markets also appear to be counting on governments and central banks to keep supporting global economies even if the pandemic continues to hold businesses back.

Mark Haefele, chief investment officer at UBS Global Wealth Management, said: “We continue to believe that equities have further room to rise in 2021 as monetary and fiscal stimulus measures provide a tailwind, and we anticipate significant earnings growth as the global economy recovers.”

The FTSE 100’s start-of-year rally comes after it clocked up its worst annual fall since 2008 last year, lagging Wall Street indices that were pulled higher by the strength of tech stocks.

Monday’s rally however saw the commodities-heavy London index outperform European counterparts, with an upturn for the oil price lifting the likes of BP and Shell to add to the surge in mining stocks.