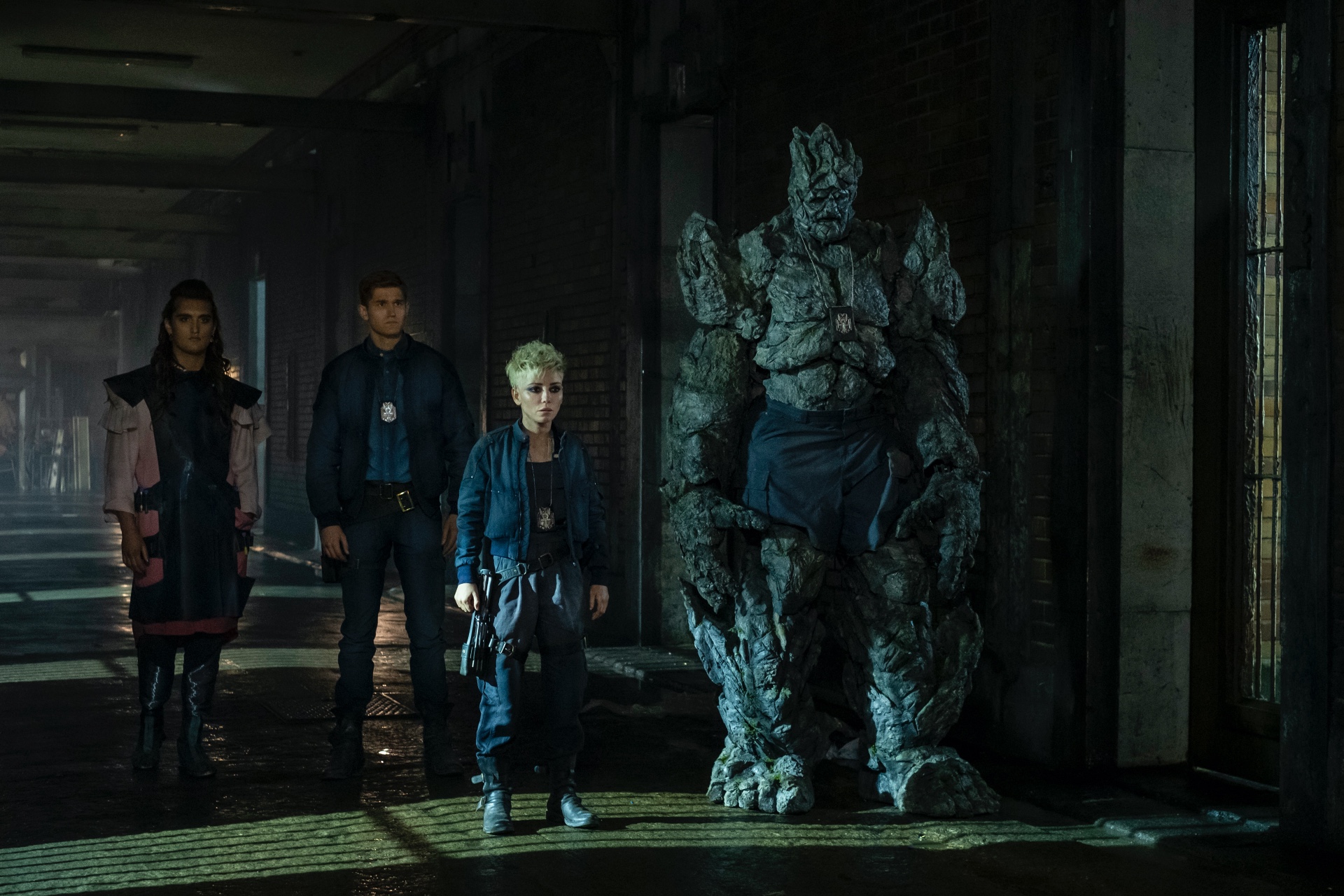 MAJOR SPOILER WARNING KLAXON! Do not read until watching The Watch episode 2. Also contains major spoilers for the Discworld novels Men At Arms and Night Watch.

Now that the spoiler warning is out of the way: why did The Watch kill off one of its main characters, Sergeant Detritus, at the start of episode two?

Sergeant Detritus the troll is one of the main characters in the Ankh-Morpork City Watch in Terry Pratchett’s Discworld series. He started out as a bouncer and security guard and had a brief career in the Disc’s even briefer dalliance with moving pictures, but he really found his calling as a member of the Watch, joining the Night Watch under then-Captain Vimes during a diversity drive, and progressing to Sergeant in the City Watch after Vimes took over both branches. He is one of the longest-serving Watch members, along with Commander Vimes, Captain Carrot, Sergeant Colon, Sergeant Angua, and Corporal ‘Nobby’ Nobbs.

It is quite surprising, then, to see his abrupt exit at the start of episode two, “Ook” (and it’s even more surprising to see him taken down by crossbow bolts, given that he is literally made of rocks). What gives?

Although Detritus is not the victim, there is plenty of precedent for the death of a Watchman in the books. Plot-wise, Detritus is more or less filling the role of the dwarf Sergeant Stronginthearm. Stronginthearm was introduced in The Fifth Elephant and killed by the serial killer Carcer Dun at the beginning of Night Watch. Carcer Dun’s character, motivations, background, time period… just about everything have been changed from the books, but he and his cronies kill Detritus here, suggesting Detritus is broadly taking Stronginthearm’s role as a colleague killed by Carcer.

The death of Detritus in the show could also be compared with the most affecting death of a Watchman in the Discworld series of novels, that of Lance Constable Cuddy (another dwarf – Pratchett really had it in for dwarf Watchmen) in Men At Arms. Numerous Watchmen have met their ends over the course of the novels, some before the story starts, several during the events of the Glorious Revolution of 25th May in Night Watch, and others, like Stronginthearm, here and there as the plot demands. Indeed, in Jingo, a voice from an alternate timeline informs us that the entire Watch from that other leg of the Trousers of Time have been killed, including Detritus.

But Cuddy’s death stands out because he was introduced, along with Angua and Detritus, as an incoming main character, and his death is rather more shocking and unexpected than most Discworld deaths. He and Detritus, after overcoming the traditional Disc rivalry of trolls and dwarfs, had become very firm friends. His death has a profound impact on Detritus, as well as the rest of the Night Watch, and his loss is probably the closest to the death of Detritus himself here in terms of its impact.

Detritus’ death, then, combines the deaths of Cuddy and Stronginthearm – a death that marks Carcer Dun out as a really bad guy, that has a major impact on the Watch, and that our remaining heroes must grieve. But the question still remains – why Detritus?

Cuddy and Stronginthearm, after all, were both dwarfs. For reasons best known to the writers and producers, The Watch has not included any dwarf Watchmen at all; both the deceased dwarf Watchmen have been written out, and Cheery Littlebottom, who was a dwarf in the books, has here become a human instead. Surely, rather than killing off a beloved character who remained very much alive throughout the Discworld’s 41-book run, it would have made more sense to include Cuddy or Stronginthearm and have Vimes saved by one of them?

The spectacle of the scene may have had something to do with it. In the show, Detritus rushes forward and takes not one but many crossbow bolts for Vimes, shielding his Captain with his substantial body – clearly, if a dwarf were to save him, the action of the scene would have had to play out differently, as they couldn’t have physically blocked the bolts in the same way.

We can’t avoid the sneaking suspicion, though, that this had more to do with budget than anything else. Looking to another well known fantasy show, Game of Thrones infamously stopped featuring the direwolves as they got bigger, killing them off as quickly as possible and simply avoiding showing Jon’s surviving direwolf Ghost even in scenes where the wolf was a crucial character. The reason was that putting the huge wolves on screen required a hefty dose of CGI, and the budget was taken up with the more plot-crucial and visually spectacular dragons.

Sergeant Detritus seems to have been a combination of practical effects (a man in a suit) and CGI, and must have been a considerably more expensive member of the Watch than the remaining characters, who are mostly human (with one exception). It’s possible that, knowing they needed to kill off a character early on to establish Carcer as a villain, the show-runners decided to axe the most expensive member of the Watch.

This is all speculation, of course, but we hope it’s not too much of a sign of things to come. Fantasy television done well is expensive, and having to make plot decisions driven by budget is something for which we definitely don’t envy the writers and producers involved. But television drama where the cost-cutting can be spotted and the characters are at the mercy of the budget is not ideal – here’s hoping the artistic reasons were first and foremost in everyone’s minds!