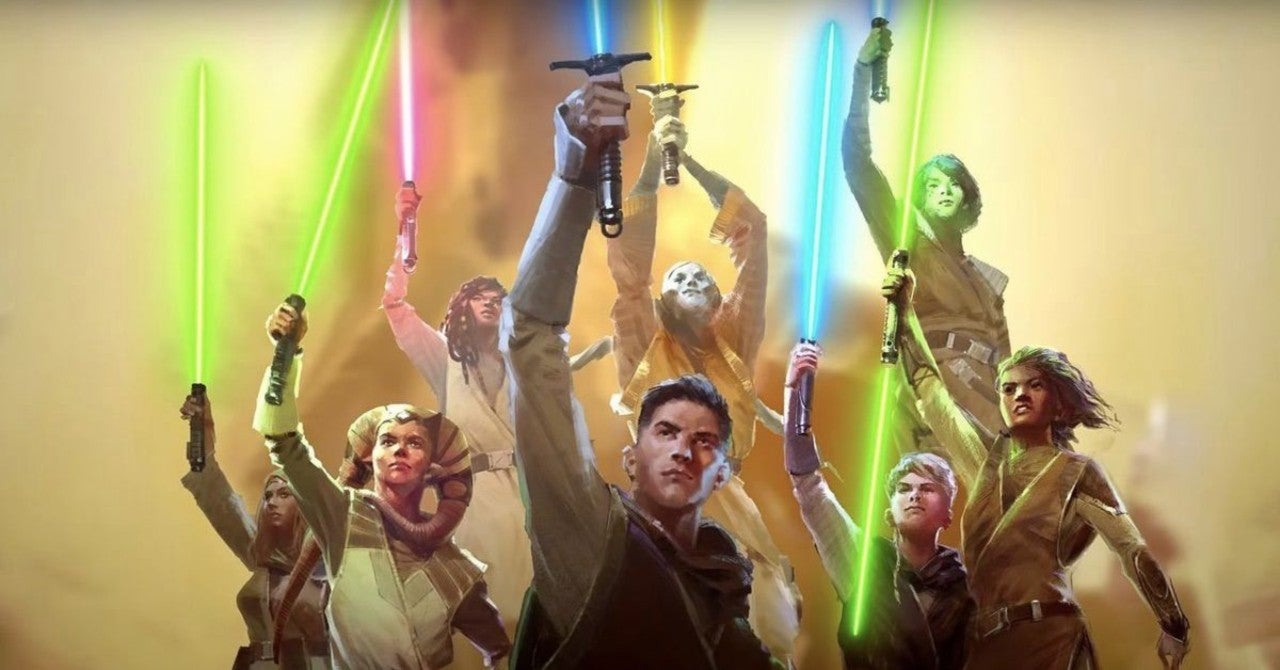 Note that we’re only listing standalone The High Republic releases. Short fiction set during the era is already running in Star Wars Insider’s pages and will continue to run there monthly. If you want every single story set in The High Republic era, you may want to subscribe to that magazine, but we won’t be listing every short story here.

The Star Wars: Tales From Galaxy’s Edge VR game also has a story titled Temple of Darkness set during The High Republic. As it’s nested in another unrelated game, you won’t find it listed below, but it’s worth seeking out if you’re a completionist or already own the VR game. The High Republic‘s creators have hinted that characters from the story will show up elsewhere in The High Republic.

Star Wars previously released concept artwork of Jedi in the story and some new starships like the Jedi Vector. Lucasfilm also released the opening crawl for the event:

“The galaxy is at peace, ruled by the glorious REPUBLIC and protected by the noble and wise JEDI KNIGHTS.

As a symbol of all that is good, the Republic is about to launch the STARLIGHT BEACON into the far reaches of the Outer Rim. This new space station will serve as a ray of hope for all to see.

But just as a magnificent renaissance spreads throughout the Republic, so does a frightening new adversary. Now the guardians of peace and justice must face a threat to themselves, the galaxy, and the Force itself….”

Keep reading to see all the upcoming Star Wars: The High Republic releases we know of to date. The books are live on Amazon now.

Light of the Jedi

Long before the First Order, before the Empire, before even The Phantom Menace . . . Jedi lit the way for the galaxy in The High Republic

It is a golden age. Intrepid hyperspace scouts expand the reach of the Republic to the furthest stars, worlds flourish under the benevolent leadership of the Senate, and peace reigns, enforced by the wisdom and strength of the renowned order of Force users known as the Jedi. With the Jedi at the height of their power, the free citizens of the galaxy are confident in their ability to weather any storm But the even brightest light can cast a shadow, and some storms defy any preparation.

When a shocking catastrophe in hyperspace tears a ship to pieces, the flurry of shrapnel emerging from the disaster threatens an entire system. No sooner does the call for help goes out than the Jedi race to the scene. The scope of the emergence, however, is enough to push even Jedi to their limit. As the sky breaks open and destruction rains down upon the peaceful alliance they helped to build, the Jedi must trust in the Force to see them through a day in which a single mistake could cost billions of lives.

Even as the Jedi battle valiantly against calamity, something truly deadly grows beyond the boundary of the Republic. The hyperspace disaster is far more sinister than the Jedi could ever suspect. A threat hides in the darkness, far from the light of the age, and harbors a secret that could strike fear into even a Jedi’s heart.

A Test of Courage

Long before the Clone Wars, the Empire, or the First Order, the Jedi lit the way for the galaxy in a golden age known as the High Republic!

Vernestra Rwoh is a new Jedi Knight at age sixteen, but her first real assignment feels an awful lot like babysitting. She’s been charged with supervising twelve-year old aspiring inventor Avon Starros on a cruiser headed to the dedication of a wondrous new space station called Starlight Beacon.

But soon into their journey, bombs go off aboard the cruiser. While the adult Jedi try to save the ship, Vernestra, Avon, Avon’s droid J-6, a Jedi Padawan, and an ambassador’s son make it to an escape shuttle, but communications are out and supplies are low. They decide to land on a nearby moon, which offers shelter but not much more. And unbeknownst to them, danger lurks in the forest?

Meet the noble and wise Jedi of the High Republic!

When a disaster strikes in hyperspace, putting the people of Hetzal Prime in grave danger, only the Jedi of the High Republic can save the day!

BEFORE THE SKYWALKER SAGA! THE GOLDEN AGE OF THE JEDI! A new era of Star Wars storytelling begins. It is centuries before the Skywalker saga. The Jedi are at their height, protecting the galaxy as Republic pioneers push out into new territories. As the Frontier prepares for the dedication of majestic Starlight Beacon, Padawan Keeve Trennis faces the ultimate choice — will she complete her Jedi Trials or rescue the innocent from disaster? New Jedi! New ships! New evils to fight!

Padawan Reath Silas is being sent from the cosmopolitan galactic capital of Coruscant to the undeveloped frontier — and he couldn’t be less happy about it. He’d rather stay at the Jedi Temple, studying the archives. But when the ship he’s traveling on is knocked out of hyperspace in a galactic-wide disaster, Reath finds himself at the center of the action. The Jedi and their traveling companions find refuge on what appears to be an abandoned space station. But then strange things start happening, leading the Jedi to investigate the truth behind the mysterious station, a truth that could end in tragedy….

An all-new ongoing series! In the glory days of the Republic, two hundred years before the adventures of Luke, Leia, Han, and Chewbacca, the Jedi stand as guardians of galactic peace—until a powerful new adversary called the Nihil arrives. Now a group of young Padawans, training under Master Yoda, must protect the Republic while learning the lessons that will one day lead them to become powerful Jedi in their own right

The adventures of the Jedi of the High Republic era continue in this Star Wars novel.

Race to Crashpoint tower is billed as an action-packed middle-grade novel. It stars Lula Talisola and Ram Jamoram.

Out of the Shadows

Out of the Shadows is a YA novel following the adventures of Jedi Knight Vernestra Rwoh, Padawan Reath Silas, and young inventor Avon Starros.

The Monster of Temple Peak

This original graphic novel follows Ty Yorrick, a Force-sensitive — but not Jedi — monster hunter. We don’t have a specific release date for this OGN yet, but we expect it to release after or alongside The Rising Storm, though this story takes place just before that novel’s events.

The Edge of Balance is an original manga set in the Star Wars universe. It follows Jedi on the frontier of the Galactic Republic. This is volume one of a planned series.

The Vow of Silver Dawn

The Vow of Silver Dawn is a web novel set during The High Republic. It is available exclusively in China, where Lucasfilm is attempting to grow the popularity of the Star Wars franchise.

The tale is a coming of age story about a young Jedi padawan named Sean, whose loyalty is torn between what the Jedi Council wants and his own personal goals.

At this time, there are no plans to translate the story into English.

Leslye Headland, Emmy Award-nominated creator of the mind-bending series Russian Doll, brings a new Star Wars series to Disney+ with The Acolyte. The Acolyte is a mystery-thriller that will take the audience into a galaxy of shadowy secrets and emerging dark side powers in the final days of the High Republic era.