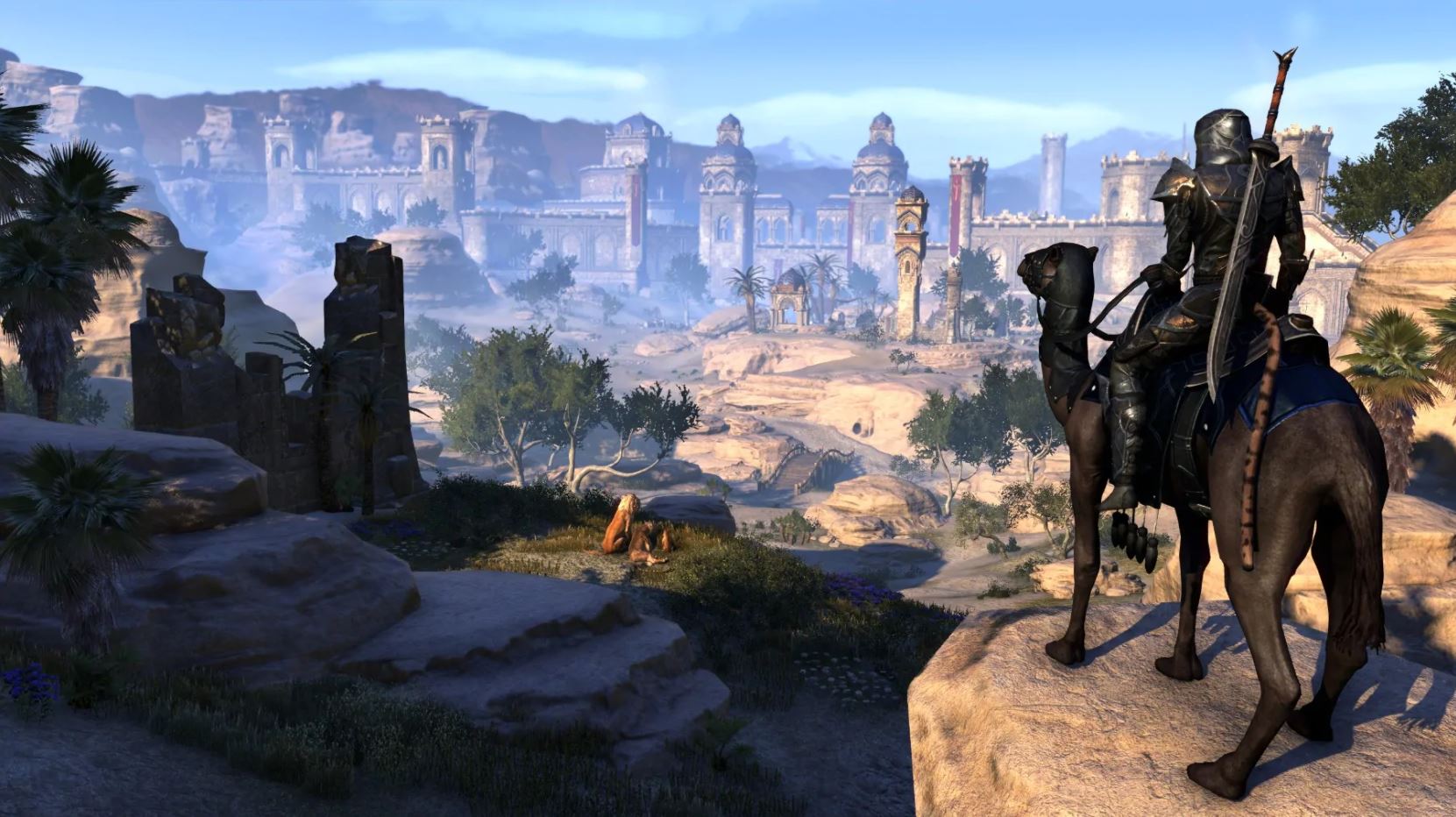 The long wait for The Elder Scrolls 6 (and confirmation of its console exclusivity) was recently broken up by this tweet from the Elder Scrolls team which many fans believe is somehow related to the upcoming sequel:

The meaning of that tweet is very much open to interpretation, but the placement of the lights, the wording of the text, and, admittedly, a few leaps in logic have led many fans to believe that the Hammerfell region featured at the bottom of that image is actually the setting for the next mainline Elder Scrolls game.

While that may sound like little more than wishful thinking fueled by information starved fans, this latest Elder Scrolls 6 rumor is really just the latest entry in an ever-growing case file that clearly points to Hammerfell as the leading location candidate. In fact, you could disregard that tweet entirely and still convince yourself that The Elder Scrolls 6 will take place in Hammerfell based on these pieces of direct and circumstantial evidence:

There are a couple of trademarks and copyrights loosely connected to The Elder Scrolls 6, but the most fascinating of these potentially related terms has to be “Redfall.”

As we’ve discussed before, sci-fi author Jay Falconer previously disputed a ZeniMax Media trademark application for the phrase Redfall as he had written a series of books under the same name. The dispute has since been settled under undisclosed terms.

While the Redfall trademark could pertain to nearly anything, the term relates to the Hammerfell region in a couple of fascinating ways. The “fall” and “fell” connection is probably obvious enough, but the “Red” part of the term could be a reference to the Redguards that call Hammerfell home. Could The Elder Scrolls 6 deal with some kind of tragedy that befalls the Redgaurds and threatens their domain?

It’s also been pointed out that the Redfall name could apply to a plague that was briefly referenced during Skryim (the disease turned your skin red), but it honestly feels like that connection is slightly looser.

Hammerfell is a Large Region Perfect for an Open-World RPG

Unless The Elder Scrolls 6 is going to swerve everyone, it feels safe to speculate that the upcoming project will be an open-world RPG in the style of previous games in the franchise.

It’s the open-world part of that genre that makes Hammerfell an obvious location choice. At a glance, Hammerfell is obviously one of the largest regions of Tamriel. At the very least, it’s clearly bigger than High Rock, Velenwood, Elsweyr, and Black Marsh. It’s a prime candidate for a sequel location if “escalation” is one of the design team’s main goals.

More importantly, the lore of Hammerfell’s layout makes it a perfect candidate for this genre. Most of Hammerfell’s cities are located along the region’s coast while the bulk of the area is actually a dangerous desert. While there are locations and people in that desert that make it more than endless stretches of sand, the idea of a kind of “badlands” that you must traverse between cities certainly matches the navigational expectations of an open-world RPG.

The lone teaser trailer that’s been released for The Elder Scrolls 6 so far is light on details (to say the least), but it’s honestly not much of a stretch to suggest that the teaser features an early glimpse at Hammerfell.

Not only does the teaser showcase a somewhat arid region that emphasizes the coastline (which, again, matches the basic layout of the Hammerfell region), but it notably features a prominent mountain range that some fans have already “matched” to the mountains of Hammerfell.

We should also point out that an alternate read of that trailer suggests that it’s actually teasing the High Rock region which shares a border and certain geographical features with Hammerfell. At the very least, High Rock and Hammerfell are the most popular location candidates at the moment.

Speaking of Hammerfell’s borders, it’s potentially significant that the Hammerfell region shares a border with some important Elder Scrolls locations.

Not only does Hammerfell touch Cyrodiil and Skyrim (the locations of the two previous mainline Elder Scrolls games), but as we just mentioned, it neighbors the High Rock region which is undoubtedly one of the most historically significant corners of The Elder Scrolls universe.

The fact that Hammerfell touches the locations of the most recent Elder Scrolls games would just be a potential throwaway factoid were it not for the idea that so many other clues directly point to it as the leading location candidate.

When you think of Skyrim, you probably think of snow. Whereas many large fantasy games feature beautiful and colorful worlds that are being seized by some humorless evil force (Oblivion is a great example of this), Skyrim emphasized a comparatively barren wintery landscape that was harsher but beautiful in its own way.

Assuming that The Elder Scrolls team doesn’t want to go back to a more “traditional” fantasy setting (which High Rock would certainly provide) Hammerfell offers a fascinating alternative. On the simplest level, Hammerfell is easily identified by its desert regions whereas Skryim was mostly about snow and winter.

The contrast between the two areas may be a bit on the nose, but Hammerfell would certainly immediately distinguish itself from Skyrim while retaining some of the more muted geographical elements that made that game notable.

We briefly mentioned the Redguards before, but they really are fascinating characters. As humans hardened by the sometimes inhospitable Hammerfell region, Redguards as typically described as the greatest warriors in Tamriel.

That last bit of information could prove to be relevant from a gameplay standpoint. Skyrim made combat much more fluid and “active” than it has ever been in previous Elder Scrolls games, and Fallout 4 furthered the idea that Bethesda is interested in utilizing more reaction-based combat in their open-world RPGs.

If they continue along that line, then it would make sense for The Elder Scrolls 6 to primarily feature a race of characters renowned for their combat abilities. Granted, that’s a bit of a stretch, but when you’re talking about a game that is years away from being released, that’s kind of what you’re left with.