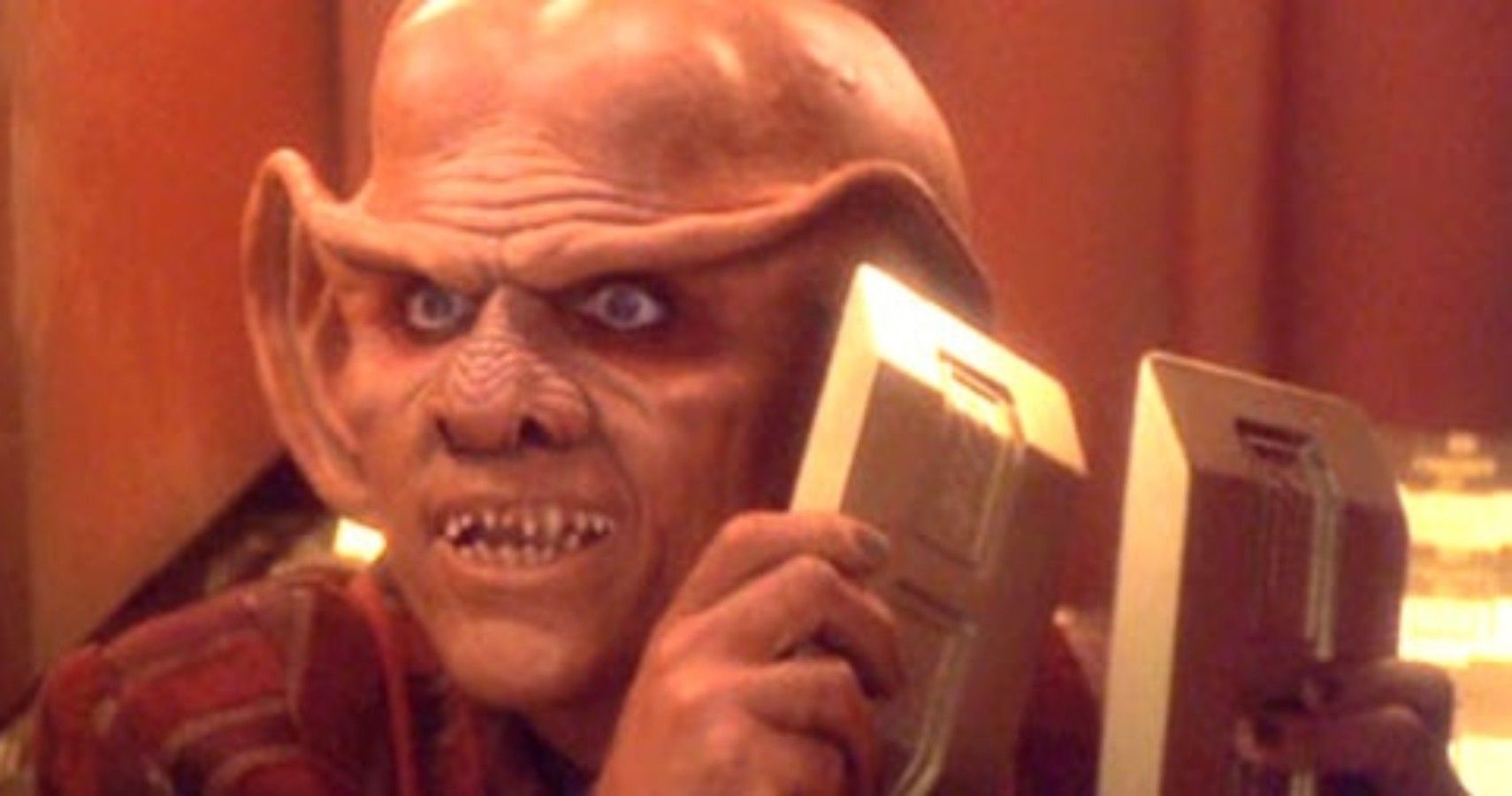 This article contains spoilers for Star Trek: Discovery Season 3, Episode 12, “There Is a Tide…”

Remember that time when Admiral James T. Kirk pretended to be a socialist so he didn’t have to pay the bill on a pizza date? In Star Trek IV: The Voyage Home, Dr. Gillian Taylor (Catherine Hicks) rolls her eyes as Kirk is taken-aback about having to pay for the pizza and one round of Michelob (yes, Michelob) beers. Gillian says, “Don’t tell me that they don’t have money in the 23rd Century.” Kirk replies faux-innocently, “Well, we don’t!”

Even by that point, Trekkies knew that Kirk was playing dumb. This is the same Kirk who successfully staged a hostile takeover of a gangster planet in “A Piece of the Action,” and was more than a little bit familiar with the belly-dancer cafe scene on the planet Argelius II in “Wolf in the Fold.” In “The Doomsday Machine,” Kirk told Scotty that his favorite miracle worker had “just earned your week’s pay,” for fixing some phaser-banks at the last second.

The Voyage Home was released in 1986, the same year Trek celebrated its 20th Anniversary. A year later, in 1987, The Next Generation debuted, and everyone really pretended like the Federation didn’t know anything about capitalism or space cash. During the first season of TNG, the biggest enemies to the Federation were the Ferengi, basically presented as greedy capitalists with energy whips and pointed teeth. By 1996’s First Contact, Picard told Lilly (Alfre Woodard) that “money doesn’t exist in the 24th Century…we work to better ourselves.”

It all sounds nice, but even by that time, the Trek franchise had started getting a little more honest about the economics of planets and governments that weren’t part of the United Federation of Planets. In Deep Space Nine, Sisko and the rest of Starfleet had to cut deals with all kinds of people who dealt in gold-pressed latinum, among other types of currency. The bottom line is: We’ve always known the Federation dealt with other cultures that did use money, even if they pretended like they didn’t.

In Star Trek: Discovery Season 3, Episode 12, “There Is a Tide…” the leader of the Emerald Chain, Osyraa (Janet Kidder) directly calls-out Admiral Vance for the Federation’s hypocrisy on this point and says that in order for there to be true peace in the galaxy that the Federation can make a gesture “by acknowledging that capitalism is already happening within the Federation.” She mentions a space station called Deep Space 253, a Federation outpost, that regularly trades with the Emerald Chain. She demands that Vance and the UFP “sanction that trade.”

Obviously, if you’ve seen the episode, you know the peace talks between Vance and Oysraa don’t go all that well. Basically, Vance says she has to stand trial for war crimes, and she’s like “nope!” But, despite Osyraa being a horrible person who uses captured space animals to kill her family members, she’s kind of right about the Federation. She tells Vance that the Federation is an “abstraction,” and wonders what would happen if Vance and Starfleet were able to make their abstract ideas a little more “real.” These scenes between Vance and Oysraa are like the soul of Star Trek having a therapy session about its spending habits. Yes, the Federation is a benevolent organization that likes to help people, but who do they actually owe money to? And, if they just all conveniently decide that they don’t use money internally, that doesn’t change the fact that they still have to deal with other people who do.

Attempting to figure out how commerce operates within the post-money future of the Federation isn’t something that can be summed up in one episode of Discovery, or in an article on the internet. If you want to read a cool Star Trek novel that tries to dig into this stuff, check-out Keith R. A. DeCandido’s Articles of the Federation (2005) or the excellent non-fiction book Trekenomics (2016) by Manu Saadia. Both of those books take excellent stabs at the hows and whys the Federation could logistically function if we thought about it realistically.

What makes Osyraa’s debate with Vance interesting is that she’s basically saying that sure, the Federation might have some good ideas, but if they pretend like there aren’t some advantages to capitalism, then they’re hypocrites. We saw shades of this in Star Trek: Picard, too. Sure, when Raffi and Rios were part of Starfleet, it was easy to keep some of their more self-destructive impulses at bay. But, what happens when the Federation leaves people behind? What happens when someone like Raffi doesn’t live up to what the Federation demands of her?

In Picard, the answer to this question is the casino planet, Freecloud. Discovery’s answer to this question is the Emerald Chain. Clearly, we’re not meant to side with Oysraa in Discovery or Bjayzl (Necar Zadegan) in Picard. But, when Rios pretended to be a “Facer” in “Stardust City Rag,” everyone involved did evoke the name “Quark.” Are we really prepared to say that Quark was any better or worse than Oysraa? The narrative lens of DS9 would tell us that Quark became a better person because of his exposure to the Federation. But, Oysraa is kind of saying that’s because of our pro-Federation viewpoint.

A Star Trek series that takes place entirely inside the Emerald Chain or on Freecloud, wouldn’t be Star Trek. And yet, the debate Oysraa and Vance have is one of the more honest Star Trek-y debates the franchise has had in quite a long time. Just because the Federation is reaching for a brighter future, they’re not always honest about how they do it. After all, the motto of Starfleet isn’t “to gently go.” Maybe it’s “to boldly go” for a reason.