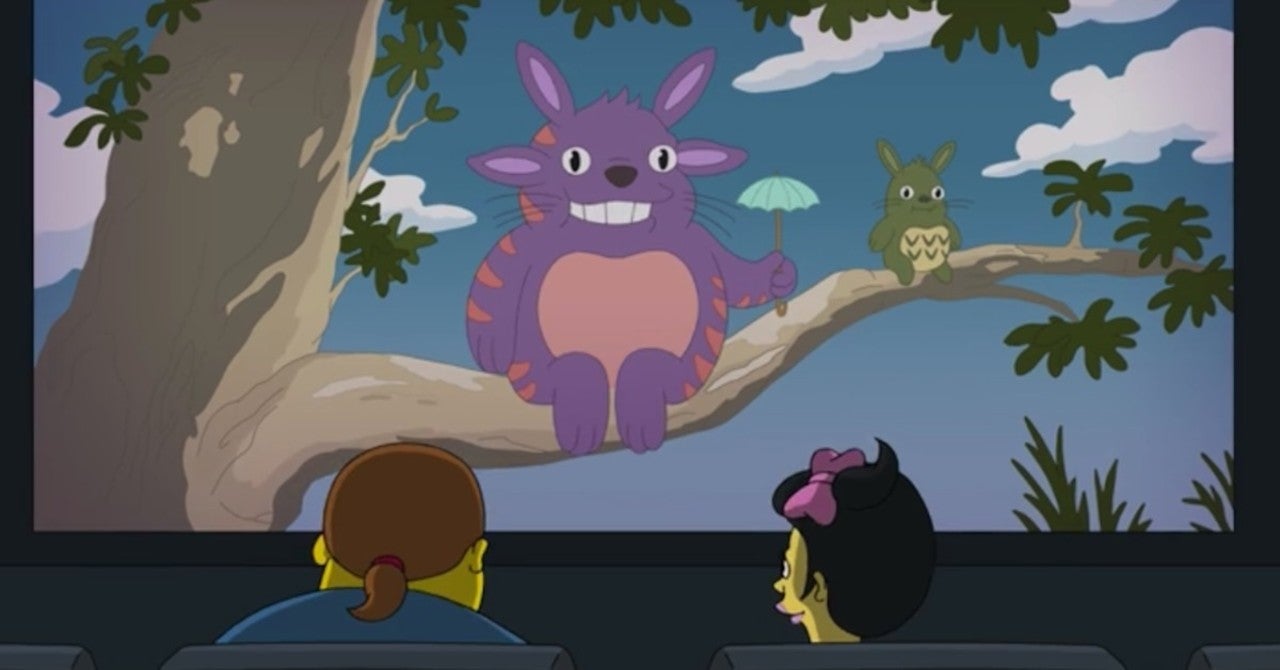 The Simpsons has once again taken a moment to honor Studio Ghibli, in the shows’ latest episode, “The Dad Feelings-Limited”. This time, The Simpsons chose to highlight Hayao Miyazaki‘s classic 1988 animated film My Neighbor Totoro. The episode’s story saw Homer and Marge Simpson befriend Comic Book Guy and his wife Kumiko, who is a mangaka (manga writer) by trade. The point of the story is comparing the lives of married couples with kids to the lives of married couples without kids. One sequence highlights the kind of freedom and indulgence a kid-free marriage offers – such as being able to attend Miyazaki marathons, where they are showing Totoro.

This isn’t the first time the Simpsons has done a tribute to the work and legacy of Hayao Miyazaki. The 2014 episode “Married to the Blob” served as the introduction of the Kumiko character, and her odd-pair romance with Comic Book Guy. During that episode, Homer takes Kumiko’s dad out for drinks at a Japanese bar, to help smooth things over between the father and Comic Book Guy. Homer and Kumiko’s dad get drunk, and stumble out of the bar and into a fantasy world that acted as a deep-cut tribute to Miyazaki and Studio Ghibli’s films, including Spirited Away, Totoro, Ponyo, Princess Mononoke, Howl’s Moving Castle, Kiki’s Delivery Service, and Up On Poppy Hill.

Check out The Simpsons‘ epic tribute to Miyazaki and Ghibli, in the video below:

The legacy of Hayao Miyazaki and his Studio Ghibli team keeps on growing, as the anime genre continues to expand into the global mainstream. Totoro serves as the studio’s official mascot (and biggest merchandising sellers). The box office success of Ghibli’s films in Japan created a Disney-esque brand for the studio, which only helped international audiences discover films like Totoro, Spirited Away, Howl’s Moving Castle, and Princess Mononoke – all of which became cult-hits if not box office and/or award-winning hits in the US.

With the acclaim of Studio Ghibli’s work came increased respect and interest in the anime genre from western audiences , which opened the door to so many other anime films (Your Name) and filmmakers (Makoto Shinkai) becoming international hits. That’s not to mention, anime series like Dragon Ball, My Hero Academia, and Demon Slayer drawing audiences to their shonen superhero blockbuster features.

The Simpsons helped establish animation as a more acclaimed pop-culture entertainment form, along a similar timeline as Studio Ghibli’s rise. It’s great to see the show acknowledge Miyazaki, Ghibli, and the anime genre as a whole again. It only reinforces that anime is part of the new mainstream cultural map, which the Simpsons has been charting for decades.