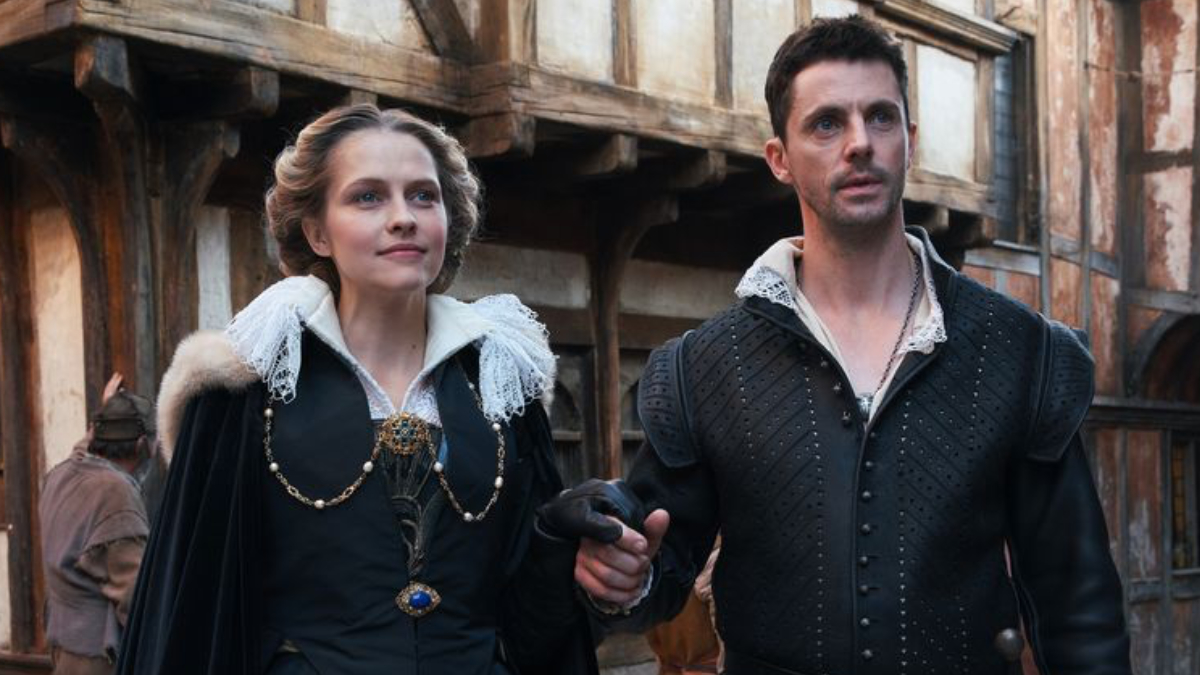 This A Discovery of Witches review contains spoilers. Our spoiler-free review is here.

As honeymoon destinations go, Elizabethan London isn’t quite the Maldives (fewer coconuts, roughly the same amount of leeches) but for historian Dr Diana Bishop, it may as well be. To a history nut like her, the prospect of experiencing life in the 16th century must have been quite something. To meet Sir Walter Raleigh, see St Paul’s before Christopher Wren got his hands on it, wear gowns so voluminous that a small family and several pets could be comfortably housed beneath her skirts… she’d be living the dream.

Or she would have been if when she arrived, everybody in Elizabethan London including her vampire lover wasn’t acting like a prize knob. Diana must have imagined spending her time-walk eating marchpane, playing at lawn bowls and getting fingered on the royal barge. Not for a second did she think that her modern, lab-based beau would slot right back into his old job of poking holes in Catholics, and right back into the social mores of the age.

Diana and Matthew aren’t yet married, but that didn’t stop him from treating her like a possession this episode. He laid down the law and fumed whenever she exercised freedom of mind. Has the two-and-a-bit-year break between the first and second seasons made him forget that about a fortnight ago ‘Mistress Roydon’ not only saved his life but also rescued herself from a fairy tale dungeon, drained the powers of a dark witch and killed a vampire with an arrow made of fire? Somebody get that vamp a boxset.

Admittedly, Diana’s magical repertoire isn’t what you’d call reliable. She also happens to have landed in a time when women were routinely hunted down for knowing which roots to boil up for a Lemsip, so Matthew’s fear isn’t baseless. He’s also well aware that Elizabethan England is full of spies, what with being one.

Being back in the olden days doesn’t improve Matthew. His old surroundings revert him to a persona of snarling, disdainful violence that’s hard to admire (even if Matthew Goode is excellent at delivering it). If this dynamic of Matthew growling at people and Diana hitting him on the nose with a rolled-up newspaper to make him stop continues, it’ll be equally hard to believe in their love story.

Frustratingly stripped of allies, Diana was forced to spend the season opener patiently and steadily reminding everybody that she has a mind of her own. She’d better not have to spend her entire stay in Elizabethan England as an apologist for and pacifier of het-up men.

Perhaps it’s the leather outfit riling Matthew – breathable fabrics not being a thing in the 16th century, it must have been an uncomfortable time. If clothes do maketh the man then Matthew needs to get out of that doublet and hose sharpish because they’re making him into a bit of a bellend.

The clothes also aren’t doing Diana many favours. Less dressed by the maid than upholstered, Teresa Palmer’s beautiful head emerged from this week’s makeover poking out of an Elizabethan three-piece suite with matching scatter cushions. When Matthew first sees the sofa-dress, he’s understandably lost for words but quickly regathers his composure and declares it excellent – already getting the hang of married life.

Reacting with all the grace of a petulant cheerleader, Kit Marlowe was less diplomatic towards Diana. He spent the episode with his arms crossed essentially hissing at her from beneath his emo fringe. A demon in this reality (what do demons do again? This show has yet to specify. Not win tavern brawls, evidently), Kit is clearly in love with Matthew and jealous as all get-out of his new wife.

For all Kit’s one-note resentment earlier, Tom Hughes gave us the episode’s most psychologically complex moment. Over a fireside cup of wine with Diana, he tries to warn her off with a scarily on-point description of how Matthew operates around love objects. Diana calmly put him in his place, but the accuracy of his words must have given her pause.

Not much gives Diana Bishop pause. Inner conflict isn’t this witch’s thing. Diana feels, speaks and acts largely free of qualms. She’s a strange combination of intensity and… breeziness. (Essentially telling Kit, ‘No biggie, your Matthew will probs come back when we leave, it’ll be fine. Whatever’.) It’s an uncomplicated way to go about life, which is probably fair enough as complications seem to find Diana without her needing to invent any more of her own.

The script is similarly goal-focused and unambiguous. Characters have a habit of stating their aims as they enter and leave a scene, like an extended game of ‘I went to the shops and I bought…’ This episode’s shopping list is 1) get Diana a teacher, 2) get the Book of Life and 3) get the hell home – where we know that Satu, Knox and Gerbert are waiting.

No, ambiguity isn’t much called for in lush, escapist A Discovery of Witches. Diana’s usually set to one of two modes: ‘sure about something’ or ‘very sure about something’. She’s very sure, for instance, that Olden Days Sophie is meant to be her new magic teacher, even if Olden Days Sophie isn’t having any of it. The new witch not only resents Matthew for torturing Catholics, she’s also likely worried she could go the way of that bowl of pears if she gets involved with Diana.

Not all witches feel the same way, as that bonfire prologue showed (ladies and gentlemen, Dame Sheila Hancock!). We learn that Dr Bishop’s step back in time was prophesied, dangling a more enticing thread than anything we saw in this opener. Until next week.

All episodes of A Discovery of Witches season 2 are available to stream on NOW TV in the UK.