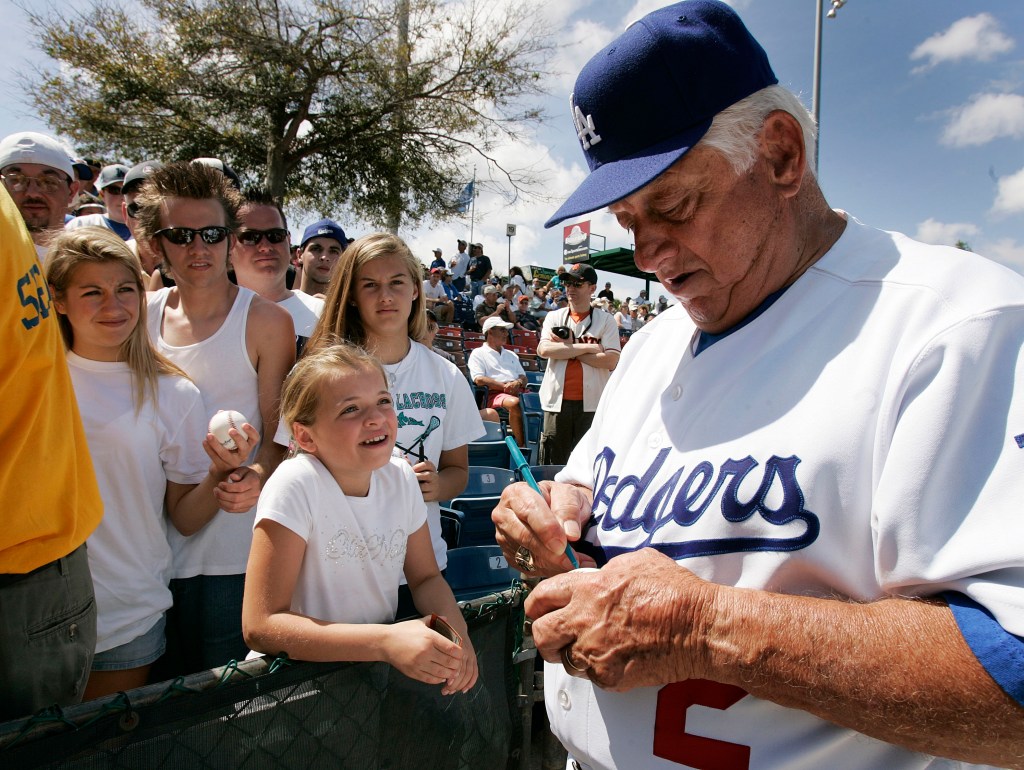 Oh, the laughs that man gave us for over 50 years with his X-rated rants on bums hitting .200 who got lucky and beat the Dodgers. Side-splitting laughs, tears rolling down your face laughs. I’d give you a couple, but I’d get fired. There’s plenty of PG-rated stories, though.
https://embed.sendtonews.com/oembed/?fk=bRolOyFR&cid=8151&sound=off&format=json&offsetx=0&offsety=0&floatwidth=400&floatposition=bottom-right&float=on

Lasorda driving in the rain alone, late for a cable TV show he’s supposed to do in Long Beach, so he pulls into the diamond lane. A CHP officer pulls him over, recognizing Tommy as he rolled down his window.

“Where you going, Tommy?” the officer asked. Lasorda told him. The officer didn’t write him a $350 ticket, he gave Tommy a personal escort to the TV station, and got him there on time. Tommy gave him an autograph and called it even.

Everybody loved Tommy, even the umps who often laughed behind their masks when he waddled out of the dugout to kick dirt on home plate, while telling them about this great Italian restaurant he and Jo had dinner at the other night.

He wasn’t mad, he just wanted his players to see him standing up for them on a close call. If the umps took a liking to him for it, all the better for the Dodgers.

There’s the shrewd, business Lasorda standing in the third-base coaches box during the 1974 World Series, breaking new ground in sport’s marketing. He was wearing a Mizuno baseball cleat on his right foot, and an Adidas on his left.

It was a time when all the sports companies wanted to get their logos out there, so Tommy signed a deal with both companies to wear their cleats. He never said he’d wear both cleats of one company at the same time.

There’s Lasorda the motivator, giving a pep talk to 50 Realtors in the Valley at a new housing development in the morning – getting them charged up to go out and sell hard. In the afternoon, he gave the same pep talk to 100 Northridge Little Leaguers to go out and play hard.

A crowd of one was a pep talk to Tommy.

And, there was the compassionate Lasorda calling a longtime Dodger fan on hospice at midnight to say goodbye. He didn’t know 91-year-old Clifford Rich, but it didn’t matter. The Granada Hills former police officer bled Dodger Blue, that was good enough for Tommy.

Cliff had often told his wife, Mary, he’d give a week’s pay to sit down and have a cup of coffee with Lasorda, tell him how he’d replay those old Brooklyn Dodger games in his mind to keep his sanity as insanity raged all around him storming Omaha Beach on D-Day and fighting at the Battle of the Bulge – a scared 18-year-old kid finding refuge back at Ebbets Field.

Was there a way I could reach Tommy, a friend of Cliff’s asked? Can he give Cliff a call? But, please, make it soon, if you can. He was fading fast.

It was nearing midnight when the phone rang at Cliff’s bedside. Mary answered, listened to the familiar voice on the other end, and put the phone to her husband’s ear.

“Hi, Clifford, this is Tommy Lasorda. They tell me you are a real Dodger fan – the top one, and I’m honored to be talking to you tonight.”

For the first time in months, Cliff moved his lips, trying to talk, but nothing came out. He knew, though. This was his cup of coffee with Tommy Lasorda.

Cliff died two hours after that call. When I told Tommy the next morning, he was speechless, a rare thing for a man who always had something to say. He was shook.

Of all the Lasordas, the one I’ll miss the most is the fans Lasorda. They never left him when his days on the field were over. They stayed with him as he got old and his heart began to fail.

Every home game, Tommy’s driver would pull the town car the Dodger’s sent for him as close to the Stadium Club entrance as possible so he didn’t have to walk so far. The last couple of seasons he’s had to use a wheelchair.

If there were kids in the crowd, he’d draw them near, and give them a pep talk. He never rushed, he took his time. These kids were baseball’s future, he was its past.

And, what a glorious past Tommy Lasorda was for this city.

Nothing Phone 1 Gets New Update With November 2022 Security Patch, AirPods Battery Percentage Display, More
Morgan Wallen Releases Beautiful And Heartfelt New Music Video With His Mama For Current Single, “Thought You Should Know”
Pet Shop Owner In ‘Best In Show’ ‘Memba Him?!
Wheeler Walker Jr. Tries To Give Walker Hayes’ “Y’all Life” A Shot, & His Reaction Is Priceless
Chris Cagle Makes Up A Country Song About Some Idiots Causing Trouble At The Concert… Right There On The Spot