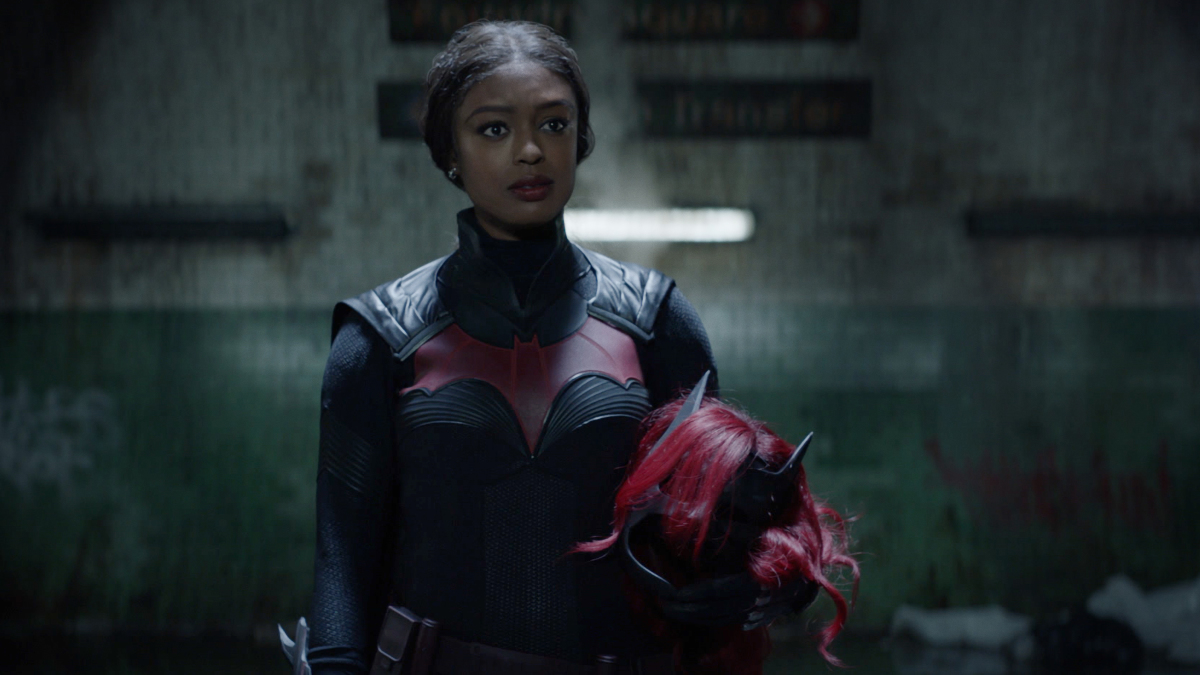 Batwoman is finally back! After cutting season 1 short by a few episodes due to the pandemic and a brief covid-related hiatus, season 2 is ready with a new hero, some new villains, and Gotham in mourning for a missing Kate Kane.

Whatever the reason for Ruby Rose’s departure, new star Javicia Leslie is an exciting addition to the show who, as a bisexual Black actress playing a Black lesbian brings with her the possibility to broaden the definition of hero even further than Kate Kane already did.

Here’s what to expect for season 2.

The season 2 premiere, appropriately titled “Whatever Happened to Kate Kane?” will air on Sunday, January 17 at 8pm et/7pm ct.

Rachel Skarsten (Alice), Camrus Johnson (Luke Fox), Nicole Kang, (Mary Hamilton), Meagan Tandy (Sophie Moore) and Dougray Scott (Jake Kane) will all be returning to reprise their roles, as will Christina Wolf as Julia Pennyworth. Will Luke pick up the Batwing mantle? Will Mary rebuild her clinic and stay with Team Bat when it’s no longer her sister in the suit? With Kate out of the way, will Julia and Sophie make a real go of it? Only time will tell, and with such an explosive season finale, there are plenty of loose ends and cliffhangers for our characters.

The big news is, of course, Javicia Leslie joining as new lead Ryan Wilder, following Ruby Rose’s departure at the end of season 1. Leslie has previously had roles on God Friended Me and The Family Business. Ryan Wilder is a brand new character who has since been introduced to the Batwoman comics.

During a virtual panel at this summer’s DC Fandome, Leslie talked about some of her inspiration for the role. “I’ve always truly admired Eartha Kitt, but I admire Eartha Kitt even outside of acting,” Leslie said. “I love her for her activism and the fact that she used her art for activism…and the power that she had as a woman.”

Other notable additions include Warren Christie as our faux Bruce Wayne and Shivaani Ghai playing the dangerous and terrifying Safiyah – more on her below. We got a glimpse of Warren Christie at the end of last season, but with Alice and Hush’s plan in motion, we’ll get to see him in action.

Check out the first trailer for Batwoman Season 2!

The CW released a pretty massive synopsis of the new season…

“In season two of BATWOMAN, when Ryan Wilder (Javicia Leslie) first discovers Kate Kane’s Batsuit, she has no idea how drastically her life is about to change. A sassy, smart lesbian with a difficult past, Ryan sees the suit as her chance to finally be powerful and no longer a victim as she survives in the tough streets of the city.

While Ryan goes rogue in the shadows, Gotham grapples with their missing hero, believing Batwoman has fled the city after a public stand-off with Commander Jacob Kane (Dougray Scott) and the Crows. But Kate Kane’s disappearance hits hardest at home where Jacob, Sophie (Meagan Tandy), Luke (Camrus Johnson), Mary (Nicole Kang) and even Alice (Rachel Skarsten) each struggle with the devastating news in their own way. Meanwhile, the False Face Society tightens its grip on Gotham, distributing a perilous new drug known as Snakebite, “Bruce Wayne” (Warren Christie) finds his way home to wreak havoc, Safiyah (Shivaani Ghai) surfaces with plans for revenge, and a new set of villains descends on the city.

It’s not long before Ryan realizes how much the symbol on the suit means to Gotham, launching her on a personal journey that takes her from fledgling substitute to confident caped crusader, from living in her van with her plant to chasing villains in the Batmobile. Ryan Wilder becomes a very different Batwoman than Kate Kane – her own Batwoman – but with the same understanding of what it means to be a hero.”

Batwoman has no shortage of villains headed into season 2. Fan favorite villain Alice is back with her Wonderland Gang, though who knows if Kate’s disappearance will be cause for celebration or a violent rage. Then there’s Tommy AKA Hush who, as of the season 1 finale, was wearing Brue Wayne’s face. The Crows, led by Jake Kane, have had an increasingly authoritarian grip on Gotham as they ruthlessly pursue Batwoman and trample on the rights of average citizens.

The most exciting, though, is the long-fabled Safiyah. One of Kate Kane’s most deadly and complicated villains in the comics, she and Kate were in a relationship during Kate’s year away from Gotham to train, but things went decidedly south. In season 1 there were hints as she exerted her influence from afar (likely her fictional Mediterranean island home of Coryana), sending henchmen like The Rifle from her criminal organization, The Many Arms of Death.

Here’s where we’ll be keeping all the up-to-date info we have on upcoming episodes of the season.

“Kate’s friends and family hold on to hope that Kate may still be found, a homeless 25-year-old named Ryan Wilder (Javicia Leslie) stumbles upon Kate’s Batsuit. Focused on no longer being a victim, Ryan takes the suit to use as armor and goes rogue in the streets of Gotham, taking out various members of a new gang called the False Face Society. Meanwhile, both Jacob Kane (Dougray Scott) and Luke Fox (Camrus Johnson) launch searches for Kate, Mary Hamilton (Nicole Kang) grapples with losing yet another family member, Sophie Moore (Meagan Tandy) struggles with things left unsaid to her first love, and Alice (Rachel Skarsten) is furious that someone got to Kate before she could exact her revenge. At the same time, “Bruce Wayne” (guest star Warren Christie) returns under the pretense of searching for Kate, but the truth is he wants his suit back and it becomes the clash of imposters as “Batwoman” and “Bruce” square off in the action-packed season premiere.”

“After her quick spin in the Batgear, Ryan Wilder (Javicia Leslie) is back to facing the daily challenges of life as herself.  Meanwhile, Alice (Rachel Skarsten) has a new, devious plan to get the attention of both Gotham and Safiyah (guest star Shivaani Ghai).  With Kate still missing and the city in an uprising, Luke (Camrus Johnson) and Mary (Nicole Kang) are desperate to find a stand in.  In a pinch, Ryan dons the suit again and comes face-to-face with Alice for the first time.  Back at Crows Headquarters, Sophie and Commander Kane try to uncover who may have had a vendetta against Kate.”

As the trailer and synopses hint at above, Ryan finds Kate Kane’s batsuit and falls into the role somewhat accidentally at first. However, like Kate did to her cousin Bruce Wayne’s suit before her, Ryan eventually makes some alterations, after a few episodes. As Leslie put it, “I felt it was important that viewers could tell by the silhouette that Batwoman was a Black girl. With the form-fitting suit and beautiful Afro, we definitely nailed it!”