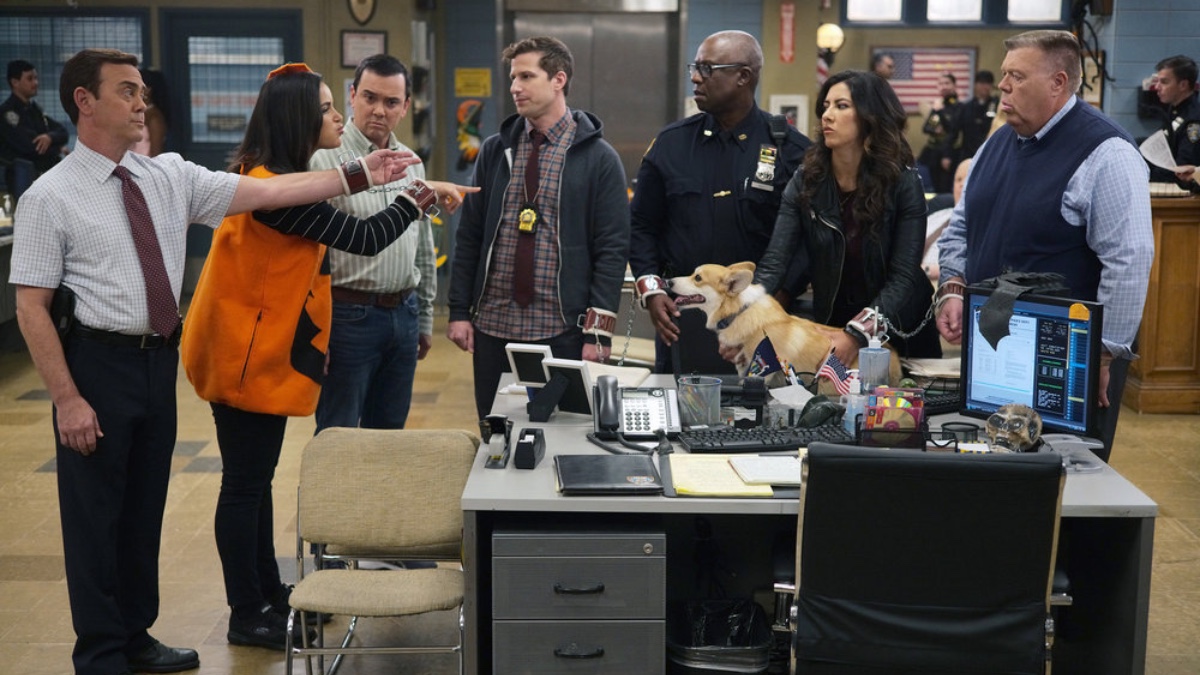 Brooklyn Nine-Nine was always produced by NBC, and now that its home where it belongs, it’s become a staple of the network’s comedy line-up. The series is also enjoying a new streaming home on Peacock, where it is available to stream for free. Always a critical favorite, the workplace sitcom seemed to be rejuvenated by the network switch, and viewers have responded. According to Deadline, the “last season grew to… 6.4 million viewers overall.” NBC executives were quick to renew the series for Season 8 just weeks after its Season 7 debut.

However, a number of events have delayed the return of the series. Besides the obvious production hurdles due to COVID-19 restrictions, showrunner Dan Goor revealed that his writing team threw out completed scripts for the eighth season following George Floyd’s death and the Black Lives Matter protests that followed it.

It’s clear that the series will deal with the Black Lives Matter movement and the current sentiment about policing this season, but how remains to be seen.

No official return date has been confirmed, but it’s a certainty that the show will air at some point in 2021. The official Brooklyn Nine-Nine Twitter account confirmed the news.

Brooklyn Nine-Nine stars Andy Samberg as goofy police detective Jake Peralta, alongside an ensemble including Melissa Fumero (Amy Santiago), Crews (Terry Jeffords), Stephanie Beatriz (Rosa Diaz) and Braugher as no nonsense Captain Raymond Holt. The main cast is all returning, and even some members that left the series will be returning in Season 8.

“The only regret I have with having 13 [episodes for season seven] is that we didn’t figure out a Gina episode, and I want to make sure that she’s in season eight,” Goor told TVLine. “I love Chelsea Peretti. I think she’s one of the funniest human beings in the world, and I love the character of Gina Linetti.”

Discussions are ongoing between the cast and crew of NBC‘s Brooklyn Nine-Nine about how they should proceed with the show after the death of George Floyd in Minnesota, anger at continuing police brutality, and global Black Lives Matter protests.

Samberg, who has played Detective Jake Peralta on the cop sitcom for seven seasons, admits that moving forward with Brooklyn Nine-Nine following the events of 2020 will be “a challenge”.

“We’re taking a step back, and the writers are all rethinking how we’re going to move forward, as well as the cast,” he told People. “We’re all in touch and kind of discussing how you make a comedy show about police right now, and if we can find a way of doing that that we all feel morally okay about.”

He added “I know that we’ll figure it out, but it’s definitely a challenge, so we’ll see how it goes.”

Samberg’s comments echo those of his Brooklyn Nine-Nine co-star Terry Crews, who first revealed that the show was being retooled during an interview last month.

“We’ve had a lot of somber talks about it and deep conversations and we hope through this we’re going to make something that will be truly groundbreaking this year. We have an opportunity and we plan to use it in the best way possible,” Crews told Access Daily. “Our showrunner Dan Goor, they had four episodes all ready to go and they just threw them in the trash. We have to start over. Right now we don’t know which direction it’s going to go in.”

Brooklyn Nine-Nine star Andre Braugher, who has played Capt. Raymond Holt on the beloved sitcom since 2013 echoed those statements, telling Variety, “Brooklyn Nine-Nine has to commit itself, as a comedy, to telling the story of how these things happen, and what’s possible to deal with them. I don’t have any easy answers, nor do I have a window into the mind bank of this writing staff. Can you tell the same story? Can anyone in America maintain any kind of innocence about what police departments are capable of?

“Can a comedy sustain the things that we’re trying to talk about? I don’t know. It could be a really groundbreaking season that we’re all going to be very, very proud of, or we’re going to fall flat on our face. … But I think this is a staff, a cast and a crew that’s willing to take it on and give it our best. I think we have a damn good chance to tell the kinds of stories that heretofore have only been seen on grittier shows.”

Beyond those systemic issues, the new season will also need to address the reality of life during a pandemic. Talking with The Hollywood Reporter, showrunner Dan Goor, “We think there is a value to escapism, but at the same time, we don’t want to be ignorant. There is a debate about what next year will look like. I don’t think anybody wants us to, nor do we want to, have our characters toiling away in the depths of the pandemic. I don’t think that’s the direction we’ll go in.

“But the question is how they have been affected by the virus and the pandemic as New York City residents and as first responders in New York City. How do we keep the show funny? How do we do that while still making them of this world and of their world? It’s challenging.

All of that being said, I wouldn’t expect the entire season to grapple with police reform and the pandemic. It’s safe to assume there will be plenty of hijinks and returning guest characters like the Pontiac Bandit in 2021, and we’ll also see Jake and Amy grappling with their new roles as working parents.