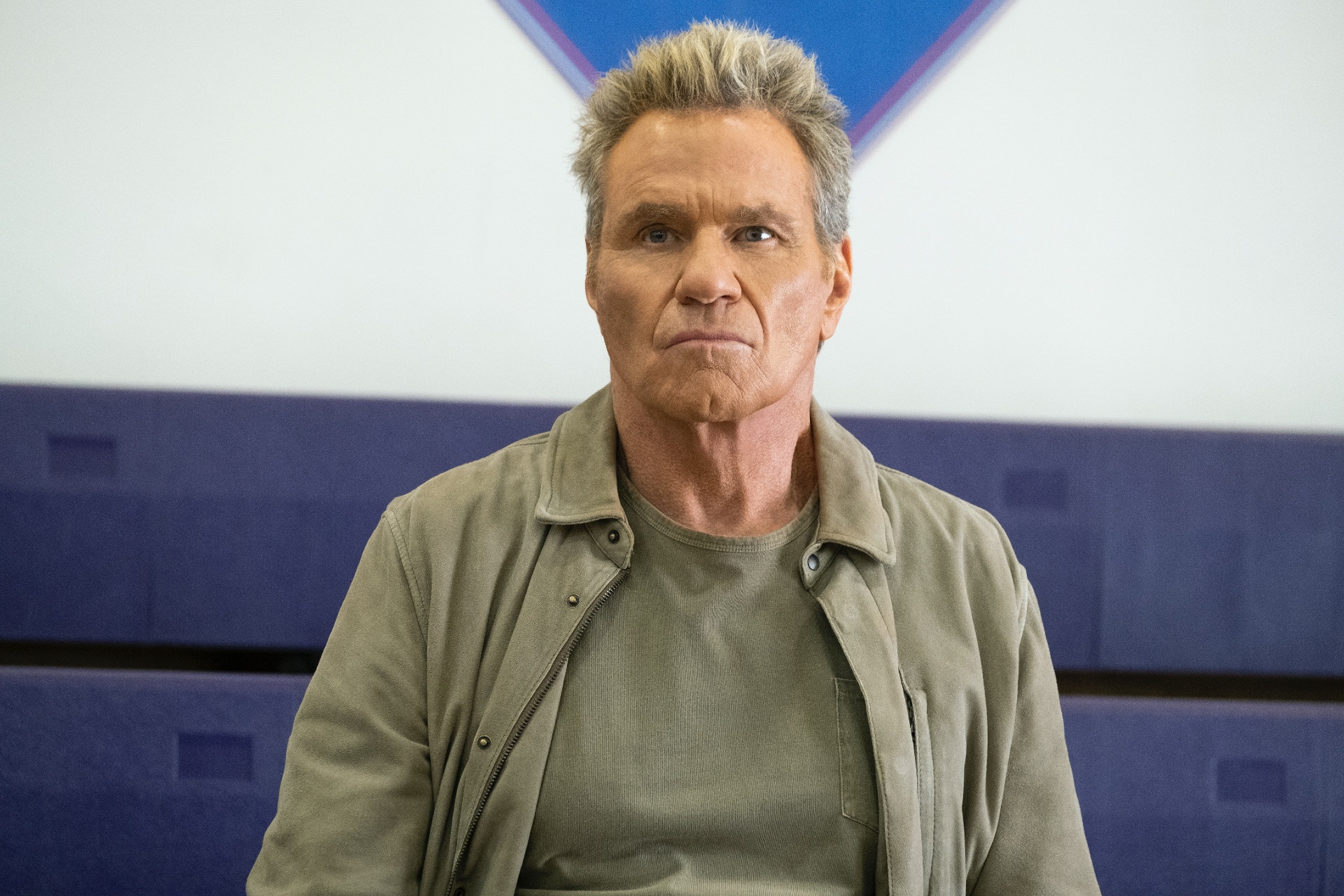 Cobra Kai season 3 revealed the backstory we didn’t know we wanted – the harrowing Vietnam experience of Cobra Kai’s biggest villain, Sensei John Kreese (Martin Kove). Cobra Kai has been on point when it comes to filling in the personal histories of their characters. The writing team of Josh Heald, Jon Hurwitz, Hayden Schlossberg, and Bob Dearden have keen eyes for details and find reasonable justifications for the actions of its villains. Johnny’s (William Zabka) abusive father Sid (Ed Answer) has provided some redemption to his character’s initial villainy. But Kreese has remained villainous throughout the entire franchise. We don’t need to rehab all the villains, do we?

Kreese’s origin tale is told across three episodes. Despite their brevity, they’re packed with clever Easter eggs for fans to find over repeated viewings and tricky red herrings that toy with fan expectations. They also give us clues to what season 4 might bring.

Enlisting Kreese and His Son

Episode 2 “Nurture vs. Nature” begins with the grill of that iconic yellow 1947 Ford Deluxe, the very model that received Daniel’s (Ralph Macchio) wax on wax off treatment. As the car pulls into a soda shop, the driver is a cocky kid in a varsity jacket with a bullying attitude. He even says “They’re the opponent. You don’t show them mercy,” but in a quick Cobra Kai red herring, it’s not Kreese. The owner of that Ford is the first bully of the canon. Young Kreese (Barrett Carnahan) is his server who gets bullied mercilessly.

The exquisite irony here is in the casting. Playing the Varsity Captain David is Jesse Kove, the son of actor Martin Kove. It’s a deliciously brilliant play by Cobra Kai. The first person to bully anyone in the history of the franchise and set off the chain of events that led to the formation of Kreese’s ultimate villainy is played by the actor’s son.

The rest of the flashback scenes reveal how Young Kreese’s hard luck life became the building blocks of his character. His mother committed suicide and is branded as crazy, giving rise to the implication that Kreese may have inherited some of his mother’s mental illness. Kreese is a naturally gifted fighter. When pushed, he is able to defend himself against the Varsity Captain and his thug buddy, and steal David’s girlfriend Betsy (Emily Marie Palmer). However, with few options for advancement at the soda shop, he enlists for the Vietnam War and heads out for basic training at Monterey. He wants to be a hero.

Episode 2 has an unusually redemptive moment for the present-day Kreese. We see him do something good for a change. Kreese reaches out to Tory (Peyton List), offering her free tuition to come back to his Cobra Kai Dojo. While he’s visiting her, he picks up on the fact that she is being sexually harassed by her landlord, Rodney (Grayson Berry). Kreese returns and solves that for her in his usual Cobra Kai way, by striking first, striking hard and showing no mercy. Although recruiting Tory back into his fold serves his own selfish purposes, he does get her out of a sticky situation, but it’s not enough to redeem him entirely.

Episode 6 “King Cobra” takes Young Kreese to Vietnam in 1968, where he is pulled aside by Captain Turner (Terry Serpico) to join his special team. Serpico bears a passing resemblance to actor Anthony Michael Hall, so much so that many fans thought it was him, sparking a wave of chatter on the web and subsequent articles refuting the mistaken identity. Given the playfulness of Cobra Kai casting, perhaps Hall will have a cameo in season 4.

Turner is the second significant bully to shape Kreese’s villainy. He instructs Young Kreese in the martial art he learned in Korea from Master Kim Sun-Yung and it’s not Karate. It’s Tang Soo Do. This resolves an issue that martial arts savvy fans have had with the series since the original films. The martial arts choreographer for The Karate Kid was Master Pat E. Johnson, who also played the Referee throughout the original trilogy. Johnson is a black belt in Tang Soo Do under Chuck Norris and well respected within the martial world. Martial arts aficionados always knew that the style propagated in the Cobra Kai Dojo was more like Tang Soo Do than Karate, so the quick clarification was welcomed. Despite this being Chuck Norris’ foundation style, most Americans don’t know enough about the martial arts to know about Tang Soo Do even today. During the era when the Cobra Kai Dojo was founded, Tang Soo Do school owners advertised Karate instead as a marketing ploy so this tiny rectification resolved a lot for martial savvy fans of the show.

Zabka continued to study under Johnson after the original film wrapped and that still shows in his fight scenes in Cobra Kai. And given that season 4 is headed back to the All-Valley Karate Tournament, Johnson would make for a great returning cameo.

Young Kreese pulls two of his comrades into Captain Turner’s special team, Twig (Nick Marini) and Ponytail (Seth Kemp) teasing another major cameo that fans are anticipating for season 4 – Terry Silver (Thomas Ian Griffith), the main villain from The Karate Kid Part III. Silver was Kreese’s old war buddy and he rocked a sleezy ponytail years before Steven Seagal broke into the movies. Silver has been referenced throughout Cobra Kai, and many fans believe the phone call Kreese makes at the end of season 3 is to him, so his inclusion in Young Kreese’s Vietnam years was essential.

Turner establishes the foundation of the Cobra Kai creed while training Kreese, Twig and Ponytail when he espouses his philosophy “No hesitation, no second thoughts and no mercy.” It’s only a short jump from that to “Strike First, Strike Hard, No Mercy.” However, their mission goes awry. Radio feedback gives away Ponytail’s position as he is laying explosives in the enemy camp and the whole team is captured. And then, shockingly, Ponytail is executed right in front of Young Kreese, Captain Turner and Twig. It’s another superb red herring. Clearly, Ponytail is not Silver. Twig is Silver.

Twig’s parting line to Kreese is “I owe you man, you saved my ass. Anything you need, I’m there for you, your whole life. You hear me Johnny? Your whole life. I owe you.” We’re all expecting payback in season 4.

The Snake Pit of PTSD

The Kreese back story concludes in the season finale “December 19.” As Captain Turner’s special team is imprisoned in a bamboo cage, Kreese blames himself for their failure. Turner taunts him about it, deepening the psychological damage. The weight of that guilt surely drives Kreese’s psychosis.

Their captors force Kreese to fight Turner to the death over a snake pit. Cobra Kai overplays that. There’s a lot of snakes in that pit, dozens of them, but they appear to be constrictors, not cobras. When Young Kreese kicks Turner into the pit, we can hear them striking, but constrictors don’t strike. They constrict. It’s a picky point, and it’s understandable that the show creators went for the quantity with a brimming bed of snakes for dramatic effect, but it was a heavy-handed play. A lone king cobra would have been better. King cobras are indigenous to Vietnam albeit endangered now. And a king cobra is the world’s longest venomous snake averaging 12 feet in length. The largest measured one was over 19 feet long. A cobra would strike, first and hard.

We already know the rest of Kreese’s story. He returns from Vietnam as a hero, as well as martial arts champion, but he’s psychologically scarred. Season 3 made us understand Kreese’s motivations and justifies his character flaws, but it doesn’t absolve him. We honor our military veterans for their service and now have a better sense of post-traumatic stress disorder, but no one has the right to stand above the law, no matter how much they have sacrificed. Will Kreese finally have to answer for his wrongdoings? Or will he find peace? We’ll just have to wait for season 4 to see.