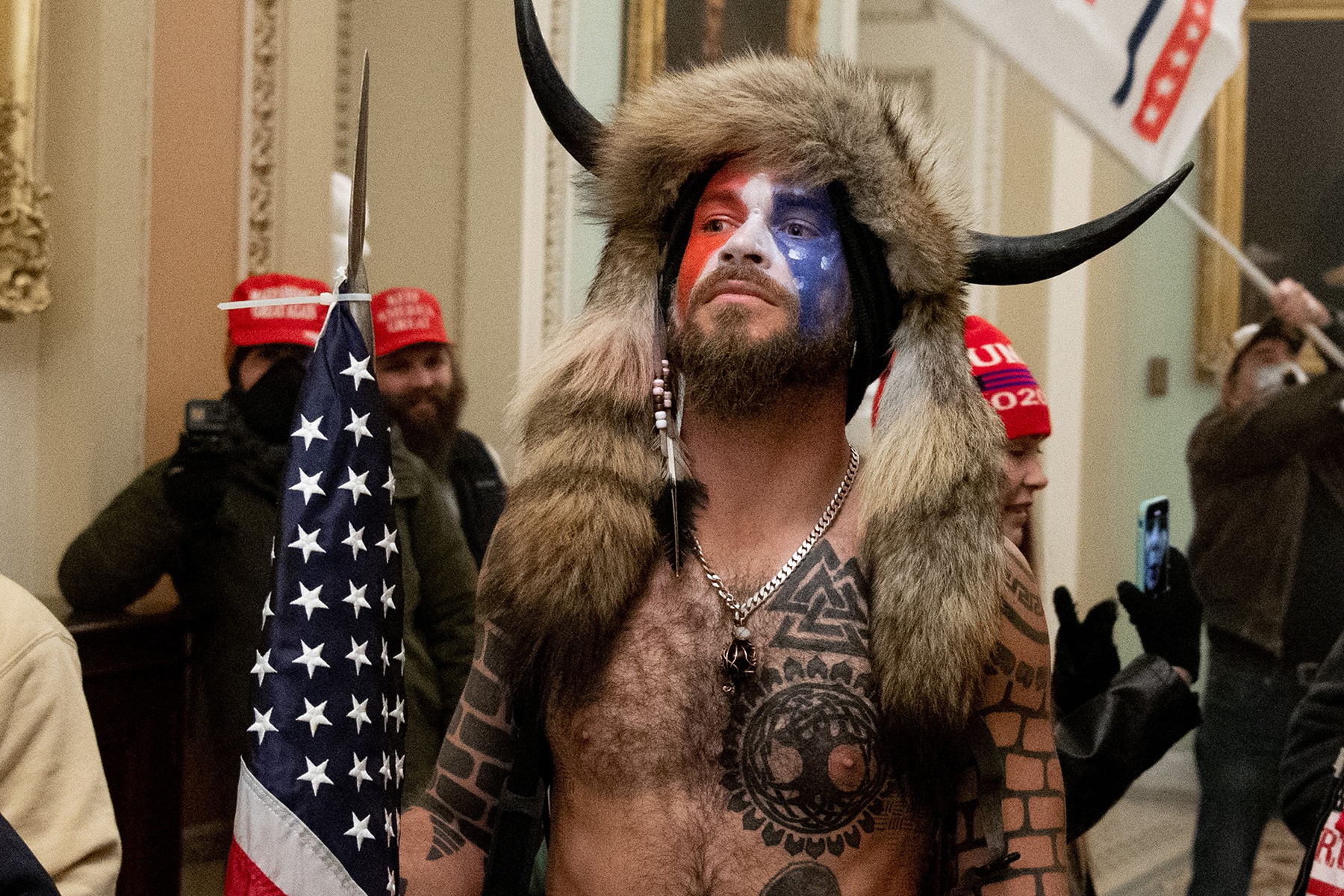 Mere hours after a mob of Trump supporters stormed the Capitol building in Washington, D.C., forcing Congress to evacuate and giving every impression of staging an attempted coup, the right-wing propaganda machine whirred to life. Republican mouthpiece Sarah Palin, Pro-Trump lawyer Lin Wood (who has since been banned from Twitter for inciting violence), far-right Florida Representative Matt Gaetz, and innumerable pro-Trump social media accounts all began spreading an unfounded and utterly bizarre false-flag theory that antifascists, or “antifa,” had somehow infiltrated the crowd and were actually behind all the violence and destruction. Among their major pieces of “evidence” were photos of Arizona QAnon supporter Jake Angeli, who is well-known for his outsized, costumed presence at pro-Trump rallies and far-right anti-lockdown protests. Angeli himself was mortified at being mistaken for antifa, tweeting plaintively, “I’m a Qanon & digital soldier. My name is Jake & I marched with the police & fought against BLM & ANTIFA in PHX.”

But there may be an even more blatant sign that Angeli is no friend to antifascists: his much-photographed bare torso is covered in symbols that have long been used by the white supremacist movement. Given his penchant for showing up to protests shirtless, face-painted, and sporting a horned helmet like some kind of racist Party City Viking who took a wrong turn and ended up at Burning Man, Angeli’s many tattoos are often on full display, including his large trio of Odinist symbols. He has a mjolnir, or Thor’s Hammer, on his stomach, an image of Yggdrasil, or Tree of Life, etched around his nipple, and most significantly, placed right above his heart, a valknut, or “knot of the slain,” an old Norse runic symbol turned recognized hate symbol that is popular among white supremacists. In addition, the mjolnir has become a symbol of identity among modern heathens, and is particularly popular among those aligned with the explicitly white supremacist neo-Völkisch” or “folkish” movement.

And in the End

The presence of Yggdrasil or even mjolnir on their own isn’t necessarily cause for alarm, given their popularity among modern pagans and fans of Norse mythology, but there is far less ambiguity around the valknut. There is some debate about its original meaning, and its three interconnected triangles have appeared on a variety of archaeological objects from the Viking era; the name itself is a neologism, a modern combination of the Old Norse valr — the slain — and knut, “knot.” While it’s used in some European corporate logos, Heathens now use it to signify that one is ready to be taken into the ranks of Odin’s chosen warriors — essentially, to die a warrior’s death for the cause. When tattooed on a conservative activist who adheres to a blood libel-style conspiracy like QAnon, it wouldn’t even have to mean he was a white supremacist, but rather that conspiratorial world views have a historical context about which their believers should be slightly self-aware.

Understandably, many actual pagans are horrified at the way white supremacists have co-opted their religious and cultural icons and twisted them into symbols of hate. Talia Lavin, who explores the concept in her recent book, Culture Warlords, says that neo-Nazis’ Viking fetish harkens back to their obsession with both traditional European conceptions of masculinity and whiteness itself. “Neopagan symbols offer the hypermasculine aesthetic sheen of the Viking,” she explains via text message. “But we can also see a desire to ground their white supremacist ideology in a purportedly timeless myth, a desire to reach back to an anachronistic, ahistorical ‘perfect’ whiteness, thus grounding their violence in an idealized past, in white nationalism as in any other form of nationalism.”

This kind of Norse imagery had a long history of being co-opted by terrible people. The original Nazis famously made heavy use of Norse and Germanic runes (the “SS” bolt is the most famous example), as do their modern successors in groups like the Nordic Resistance Movement, the Soldiers of Odin, and the National Socialist Movement, which has adopted the othala or odal rune as its logo. Members of the Aryan Brotherhood are fond of tattooing runes and Viking symbols alongside their swastikas and Celtic crosses; an explicitly white supremacist branch of modern paganism called Odinism or Wotanism is promoted by the Asatru Folk Assembly (whose founder, Stephen McNallen, attended the deadly Unite the Right rally in Charlottesville)  and continues to proliferate and cross-pollinate with other fascist ideologies (notorious white supremacist and murderer David Lane was a fan); and runes are rampant within the neo-Nazi black metal scene (which is where I first came across the valknut after stumbling on a Nazi black metal band named, well, Walknut). It’s similar to what happened to the swastika, in which an ancient religious symbol was violently co-opted by Nazis and forever poisoned; movements to “reclaim the swastika” exist, but some things simply cannot be undone, no matter how unfair it is to the innocent people who saw their sacred symbol stolen and perverted.

This is also where it can get sticky, though, because there are plenty of pagans and metal musicians who are not affiliated with white supremacist ideologies (as well as explicitly anti-fascist varieties of each). The existence of both Thorr’s Hammer, a highly respected and definitely not-fascist Nineties death/doom project with lyrics about Norse mythology and a Norwegian vocalist, and Thor’s Hammer, a virulently racist neo-Nazi black metal band from Poland with deep ties to the international Nazi black metal scene, make that apparent. Outside of subcultural niches, not every person who gets a rune or Norse symbol tattoo necessarily fully understands its political and cultural history, especially now that Marvel has brought the legend of Thor and his Hammer back into the mainstream. There is even a growing movement to wrest these symbols and modern heathenism more generally away from white supremacists, with groups like Heathens Against Hate and Heathens United Against Racism offering an antiracist alternative.

If Angeli himself were not so obviously aligned with anti-Semitic far-right extremist politics, his tattoos would not carry nearly so much weight. But since he is, he seems to be sending a message with those interlocked triangles, one that could be recognized by the white supremacists he’s chosen to march alongside. The right’s attempt to paint him as antifa would almost be funny if it weren’t so utterly detached from reality. When someone goes to such extravagant lengths to show you who they are, believe them.