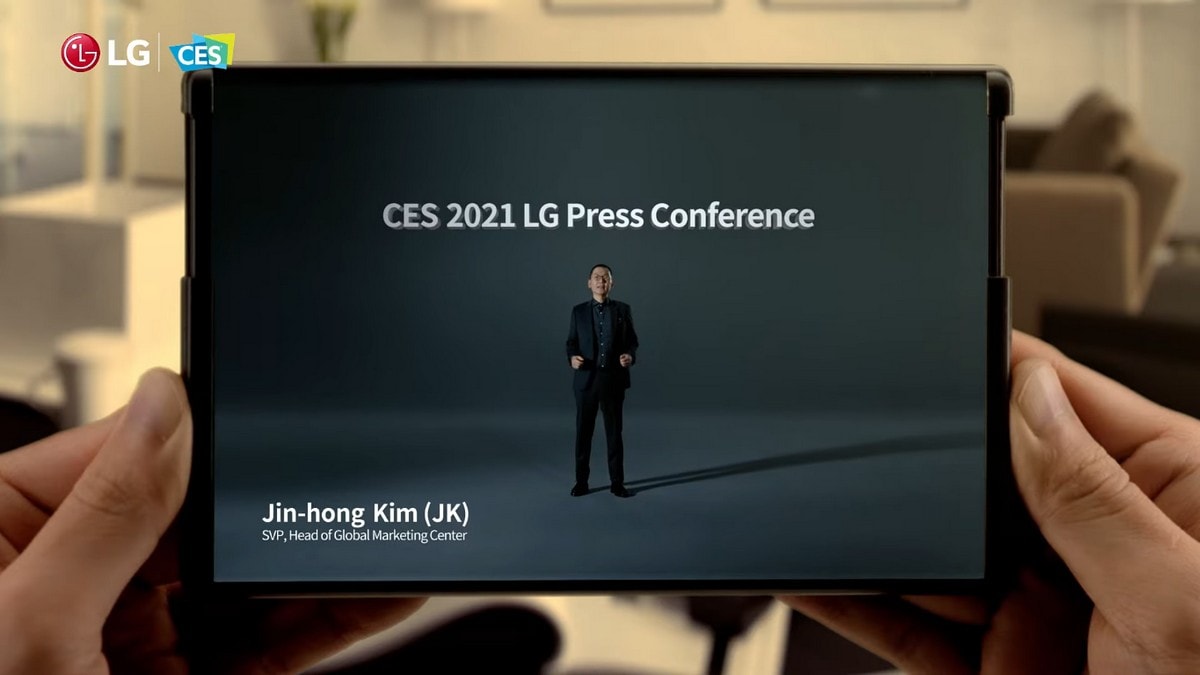 LG Rollable has been teased at the company’s virtual CES 2021 press conference. The phone can be seen once at the start of the conference and once at the end so there are no details available for it at the moment. It comes with a “unique resisable screen” and is part of the company’s Explorer Project. Like the Oppo X 2021 that was teased back in November of last year, the LG Rollable also has a screen that expands from one side from its smartphone shape to a tablet shape.

The LG Rollable can be spotted at the 2:06 mark of LG’s CES 2021 press conference. It can be seen in its normal smartphone form factor in landscape mode with slim bezels on the side and thicker bezels on the top and bottom. The display and the frame on the right side then extends to show its tablet like form factor. Then again, at the very end of the CES 2021 conference, around the 28:28 mark, the LG Rollable is seen again returning from the tablet to its smartphone form factor.

LG did not share any details about the phone and mentioned on its newsroom that it is the second device under its Explorer Project. It has a “unique resisable screen” and is an “an ‘exploratory’ look at what the future of smartphones may bring.”

This isn’t the first time LG has teased a rollable screen phone. Back in September 2020 at the LG Wing official announcement event, the company showed the profile of a device with its screen extended, just like we have now seen in the CES 2021 presentation.

Even before the LG Wing announcement event, rumours of the LG Rollable were doing rounds in July with a reported release date of June 2021. Then, in November 2020, alleged renders of the phone were shared showing a side-rolling display and it was said the launch will take place in March 2021. Then in December, LG Rollable was reportedly spotted in South Korea’s carrier intranet database. The latest rumour about the LG Rollable from last month stated that the phone could be priced at $2,359 (roughly Rs. 1,73 lakh) and launch in June 2021.