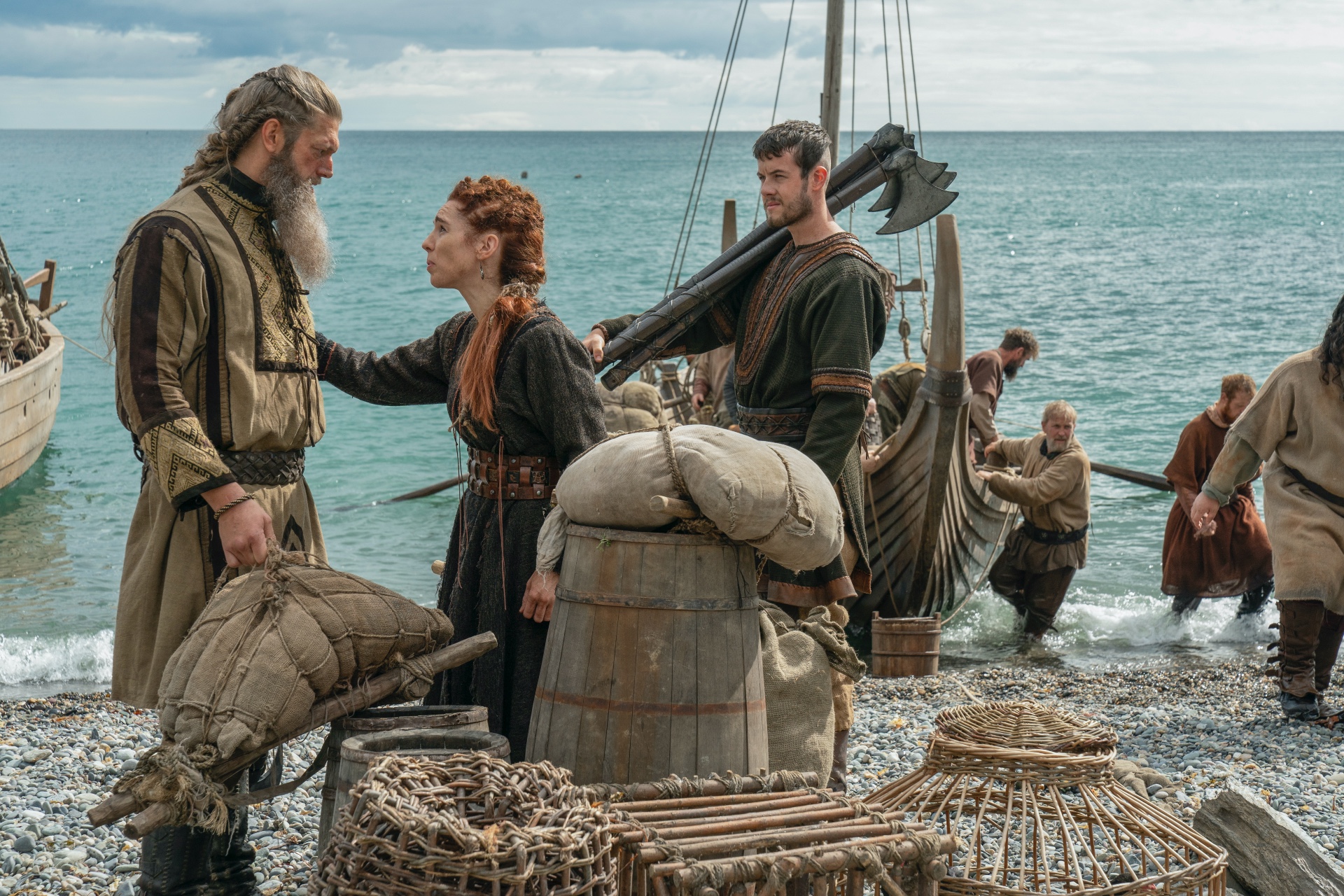 Vikings bowed out on a beautiful scene that evoked both the quiet victory of love and friendship over savage human nature, and the endless, rolling seas of the uncharted future. Floki and Ubbe sat together on a far-flung New World beach – as westward as any two Vikings had ever travelled – reflecting on their lives and lots. They basked in the warmth of each other as much in the glow of the sun, and then watched in enraptured silence as the sun slowly set in the… east? But… they sailed west and disembarked at the shore. So… how can they… And the sun doesn’t set in the east… Wait a minute.

Where exactly in the name of Valhalla were those guys?

Out with the Old, In with the New

In seeking to answer the question of where exactly in North America our titular Vikings ended up, it’s necessary to look at the evidence of where in the New World their real-world historical counterparts tried – and ultimately failed – to gain a foothold.

By the time Norsemen first glimpsed the shores of North America they had already established semi-permanent colonies on both Iceland and Greenland, which wasn’t the case when Ubbe made the same journey, or Floki before him. In the show, Iceland was still a fledgling quasi-camp, while Greenland had only just been discovered. It’s clear, then, that creator Michael Hirst is staking a claim to Floki and Ubbe having been the first ‘Vikings’ ever to have set foot on the continent.

While it’s implausible that other Vikings unknown to the historical record may have reached America without leaving trail or trace, it’s certainly not impossible. This is largely due to the scarcity and unreliability of much of the available evidence. The bulk of what we know about that place and time comes from the Icelandic and Greenland Sagas, and the Saga of Erik the Red, all of which were written at least two centuries after the events they describe. Furthermore, all of them contain, swimming among the truth, embellishments, flights of fancy and flat-out fake news.

That’s worth bearing in mind as we meet some of the real-life Vikings who blazed that westward trail.

In the show, the pattern of westward discovery begins with a beleaguered Floki surrendering himself to the winds of fate and discovering Iceland. He believes he’s found Asgard, and hurries back to Norway to gather up settlers. Despite much bloodshed, and the apparent death of Floki in the bowels of a crumbling volcano, the colony takes root. A traveller by the name of Othere arrives in Iceland and tells tales of a lush and verdant land to the west, which excites the imaginations of Kjetil Flatnose, Ubbe and Torvi, who set off to find it.

They find Greenland instead, a barren, inhospitable land that promises little but bleakness and death. Indeed, a dispute over territory and food culminates in a massacre atop and around the remains of a beached whale – precipitated and presided over by the psychotic Kjetil – prompting Ubbe, Torvi and Othere to gather up their survivors, rush to their boats and flee westward once more.

In the middle of the uncharted ocean, holding out little hope of survival, the remaining Vikings are overjoyed finally to discover the lands of which Othere spoke. There they find Skraelings (Skraelings was the less than complimentary Norse name for foreigners, meaning something like ‘savages’ – and, miraculously, Floki. Relations with the Skraelings are warm, and even survive an act of unsanctioned violence that at first threatens to place the Vikings and Skraelings at each other’s throats. All is well.

The story of how Greenland and North America were discovered by real-life Scandinavians is also characterised by accident, destiny and criminal behaviour, but takes many different turns.

We begin in Norway, with a man named Thorvald Asvaldsson. Thorvald was banished to Iceland for the crime of manslaughter (making Iceland very much the sub-zero Australia of its day). Thorvald took his family with him, including his soon-to-be-famous son, Erik Thorvaldsson – more famously known as Erik the Red – of whom sagas would one day be written. Though Erik would help colonize Greenland, he would not be the one to discover it.

That honor goes to Gunnbjörn Ulfsson, who discovered Greenland entirely by accident when his boat was blown off course on the journey from Norway to Iceland. Years later, Erik decided to take heed of Ulfsson’s account and investigate this mysterious land to the west. It was not only his intrepid nature that propelled this journey, but also necessity, as Erik had proved the old adage about the apple never falling far from the tree by getting himself banished from Iceland. Criminal history not-with-standing, the colony Erik founded in Greenland would prevail for five hundred years. He chose the island’s rather misleading name in a bid to entice more settlers to its desolate shores, figuring correctly that IcyWasteland wouldn’t have had quite the same draw.

Erik’s peripatetic ambitions rested there, but were passed on to his sons, especially Leif Eriksson, whose adventurous spirit would lead the Vikings to North America. Again… by accident.

But not Leif’s accident. In a move that presaged the great need for all Scandinavian vessels to be fitted with SatNavs, a man named Bjarni Herjolfsson took a wrong turn on a voyage from Norway to Iceland, and was the first European to glimpse the North American coastline. Leif would remember this.

The Final Westward Journey of the Vikings

The son of Erik the Red lived through a time of great upheaval in Norse society. The network of earldoms had largely vanished, leaving monarchy in its place (the show establishes a lot of this in its fifth and sixth seasons). Christianity had almost completely replaced paganism (again, this ideological battle runs through the spine of the show), to the point where even the King of Norway was a Christian. Leif converted to Christianity while visiting Norway, and was thereafter tasked by the King with spreading the word of God westwards to Iceland and Greenland.

Nobody knows if he set sail to Herjolfsson’s promised land full of missionary zeal, or whether he was simply following the family tradition of exploration. Whatever the motivation, Leif and his brother, Thorvald, set off into the great unknown with a modest fleet and a motley crew of Vikings.

It was also a land of Skraelings. Thorvald’s first encounter with them went rather less well than it did for Ubbe. Thorvald captured and killed a number of the native peoples, earning him in return a fatal arrow to his armpit.

So Where Was Vinland?

In the 1960s Helge Marcus Ingstad and his archaeologist wife Anne Stine Ingstad chartered a boat and tried to retrace the steps of those early Viking explorers, searching for evidence of settlements or colonies, using the sagas, and a crude, ancient map (the Skálholt Map), as their guide. They finally struck it lucky on Newfoundland’s Great Northern Peninsula, where they discovered, at L’Anse aux Meadows, the first and to date only evidence of a Viking settlement in the New World. Cast-iron confirmation came when excavation of the site revealed identical tools to those that had been used by the Vikings in Iceland. Could Newfoundland, then, be the mythical Vinland; Ubbe’s land of plenty?

Not likely. Even adjusting for climate variation over the past millennium, Newfoundland has never been blessed with the soil or weather conditions to support the growing of grapes. Wild grapes are to be found far south-west of Newfoundland: in Chaleur Bay, New Brunswick and, further south, in modern-day New England. Scholars think it more likely that the settlement at Newfoundland was more of a bustling way station, or a distribution hub for New World timber being sent back to Greenland.

The ‘Skraelings’ described in the sagas, and as depicted in the show, were a good match for the Beothuk people, who were natives of Newfoundland. However, it is more likely that Ubbe and his Vikings met the Mi’kmaq, a similarly daubed yet ceaselessly peripatetic tribe whose large territory incorporated Prince Edward Island, New Brunswick and Nova Scotia, among many others.

It’s worth hazarding a guess, then, that the Vinland beach Ubbe and Floki sat upon in the closing moments of the show’s finale was somewhere on the south-west coast of Nova Scotia. It’s likely they watched the sun set on the western horizon, with the coast of Maine hidden somewhere far beyond it. The flora, fauna and local tribes all match this location, too.

The real history of the Vikings’ westward journey adds a rather more somber note to that final scene. Unless Ubbe and Floki exist in some parallel universe, other Vikings will walk where they’ve walked yet find no trace of their existence, nor will any word reach Norway and Iceland of the places Ubbe and Floki found or the people they met. Which means that their dreams of peace and hope will end with death at the hands of the Skraelings, or else in the mighty embrace of the ocean as they try to return home with tales of the New World in the West. But that hope still existed, and for one blessed moment they savoured it.

Perhaps Vinland isn’t a place, but a state of mind.