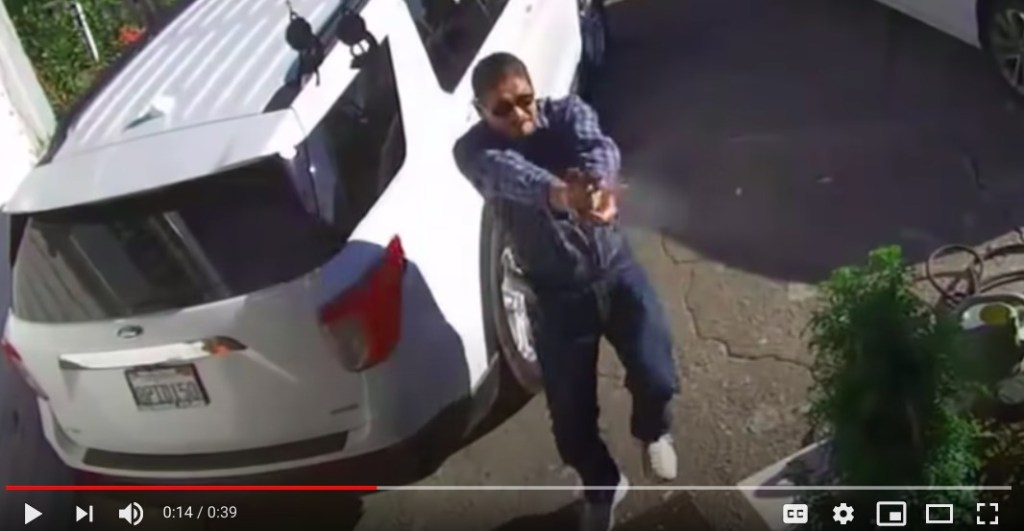 LAPD Chief Michel Moore defended his department’s decision on Tuesday in not handing over an undocumented man suspected of domestic violence to immigration authorities in September.

The man, Herbert Nixon Flores, 46, went on to become the primary suspect in the killing his ex-girlfriend, Karen Ruiz, who was shot in front of their 3-year-old daughter in Pacoima last week. Police released video of the shooting, identifying the gunman as Flores. Over the weekend, Flores killed himself while being pursued by authorities in Irving, Texas.

U.S. Immigration and Customs Enforcement said that the entire incident “might have been avoided if the suspect had been handed over to our officers months ago,” referring to a Sept. 7 case, where LAPD arrested Flores on suspicion of domestic violence with injury and declined to release Flores to ICE.

“Cases like this demonstrate how critical it is for state and federal law enforcement agencies to work together and focus all available resources against those who break the law,” said ICE’s Los Angeles enforcement and removal field office director Andre Quinones, in a statement on Monday.

Moore blasted ICE officials for conflating Ruiz’ killing with what he called standard department policy and it following state law.

“It’s a tragedy in matters such as this that another law enforcement professional would reference, in light of someone’s death, their disagreement with a well-established policy, one that is compliant with state law,” Moore said Tuesday during an online news conference.

Moore said his department has complied with SB-54, also known as the California Values Act, which took effect Jan. 1, 2018.

State legislators in passing the law were responding to President Donald Trump’s stance on immigration, which many viewed as not only against unlawful immigration but against immigrants.

The law was intended to curb state and local authorities from sharing personal information of suspects and using resources in federal immigration enforcement cases. It also bans agencies from holding suspects for immigration authorities.

However, the law does allow the transfer of inmates who face charges like assault, battery, sexual abuse and exploitation, rape, crimes endangering children, burglary, robbery, theft, fraud, forgery, a crime resulting in death, gang-related offenses, and some domestic violence offenses.

Otherwise, local law enforcement agencies such as the LAPD are not legally required to hand over a suspect to ICE, which according to Moore, was the case with Flores.

ICE has publicly decried the state’s sanctuary law, saying it threatens public safety by allowing would-be ICE detainees and deportees back into communities, potentially causing harm to others. It’s an argument that Orange County officials also made, saying in 2018 that the law “has made Orange County less safe.”

“This crime could’ve been prevented had he been handed over to our officers months ago when we asked,” Pons said.

ICE typically asks for such transfers in the form of filing detainers. Those detainers are filed by ICE administrators and are not ordered by a court, do not require a court hearing or appearance, and lack the legal authority of a warrant.

“In absence of a court process, those detainers are unconstitutional,” Chief Moore said. “As a detainer, we’re not honoring them.”

In cases where ICE obtains a warrant from a federal court, Moore said his department would comply.

Though Moore affirmed his department’s adherence to the state’s sanctuary laws, local law enforcement agencies across the state have found ways to still cooperate with ICE in immigration cases.

A report in 2019 found that dozens of local law enforcement agencies in California are directly violating the state’s immigrant sanctuary law, while others are skirting the law by following out-of-date policies or exploiting loopholes. It was produced by the San Francisco-based Asian Americans Advancing Justice-Asian Law Caucus and the University of Oxford Centre for Criminology in England.

Actress ‘critically hurt’ after car crashes into house and bursts into flames
A Template for Talking with School and Library Boards About Book Bans: Book Censorship News, August 5, 2022
How Joni Mitchell Became a Millennial and Gen-Z Hero
Anne Heche ‘stable’ and ‘expected to pull through’ after car crash
Musk sells $6.9bn in Tesla shares as battle with Twitter continues