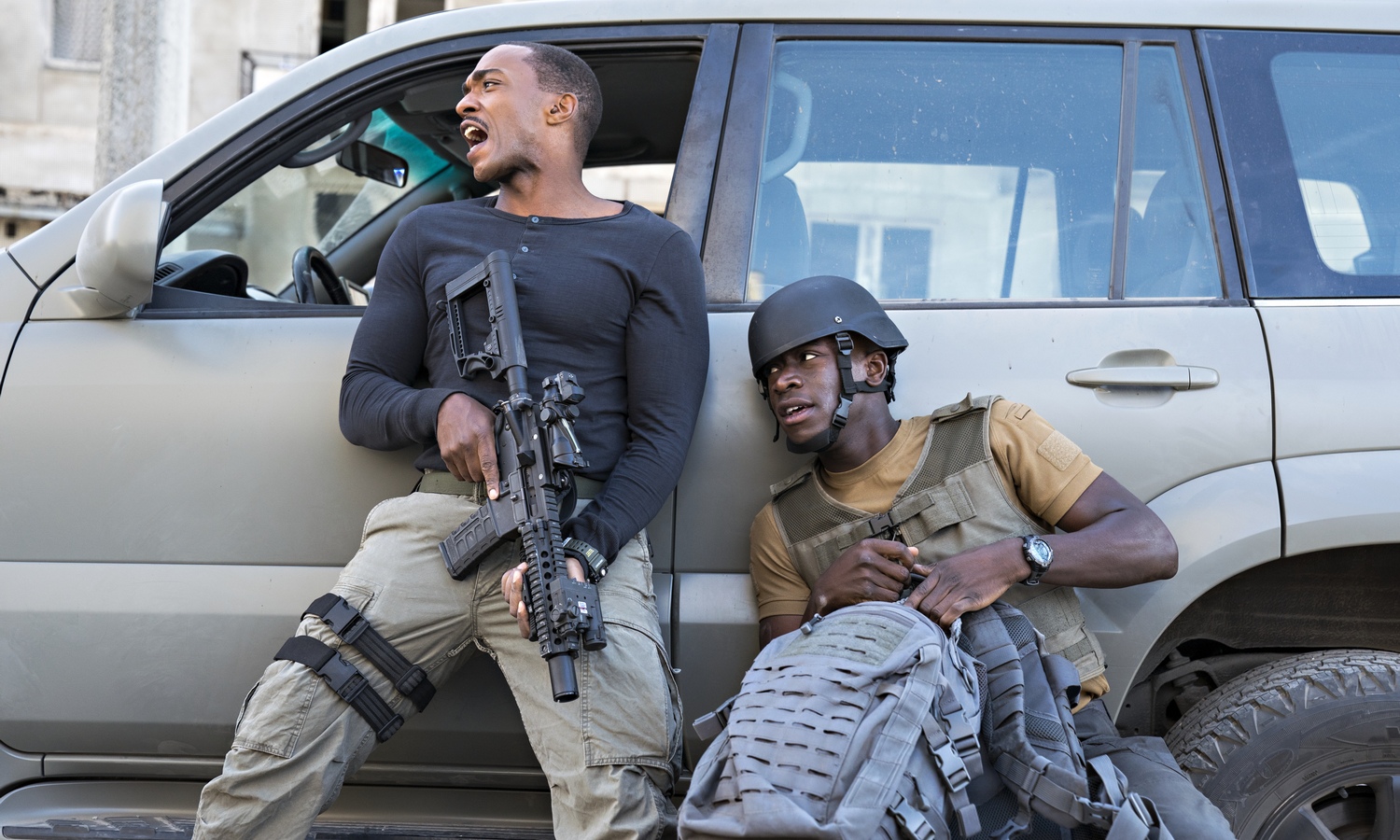 Take some ingredients from the Terminator movies, add seasoning from action war pictures like Black Hawk Down or 13 Hours, throw in a pinch of cinematic nuclear terrorism a la True Lies (minus the Middle Eastern stereotypes), and mix it all in that strange blender known as the Netflix algorithm machine. That’s likely how you come up with a movie like Outside the Wire, a military sci-fi action thriller which premieres this week on the streamer.

Directed by Mikael Håfström (whose most recent work includes episodes of the Netflix series Bloodline as well as the 2013 action film Escape Plan), Outside the Wire is set in 2036 as a violent civil war is raging in Eastern Europe, specifically in and around Ukraine. A series of title cards indicates that U.S. forces, acting as peacekeepers in the region, employ robotic soldiers known as “gumps” while the lawless zone is coming increasingly under the reign of a warlord named Viktor Koval.

The film then jumps to young hotshot (is there any other kind?) drone pilot Thomas Harp (Damson Idris), who never loses his cool even as he disobeys a direct order and launches a missile in the midst of a firefight that kills two Marines but saves 38 more. Nevertheless, Harp–who has never actually served in actual combat–is banished to Camp McDaniel, which is right in the middle of the shit. Now he must report to Captain Leo (Anthony Mackie) for his new assignment.

And here comes the big reveal: Leo is actually an android himself, the prototype of a new kind of soldier that the U.S. military is rolling out. His mission–on which Harp will accompany him–is to head into the most dangerous area of the conflict, ostensibly to deliver vaccines to the locals but also to glean information on the whereabouts of terrorist Koval (Pilou Asbaek).

Outside the Wire is the exact kind of movie people launch on Netflix and occasionally glance at while doing other things: it’s got one or two big (or at least recognizable) stars, an action sequence every five minutes, a high-concept premise, and a tone that gives it more gravitas than it really possesses. There are also the expected switchbacks, twists, and betrayals along the way, although in this case Rob Yescombe and Rowan Athale’s script gets more convoluted and incoherent as it goes.

Just the way that ideas are introduced and discarded after the first act leaves one wondering if anyone really thought any of the story through. We’re shown that Harp, for example, likes gummi bears–“gummi bear” is even the nickname given to him by his wife, who we only see twice in a photo. But it never comes up again and is supposed to serve as some sort of character detail for a character who is sketched together in the broadest possible terms. Damson Idris seems like a decent actor but he doesn’t have a lot to work with here.

Mackie, meanwhile, flexes his superhero muscles (he even has a line that directly references the Captain America franchise in an otherwise mostly humorless movie), plowing singlehandedly through terrorists like the Star Spangled Man himself. But much of Leo remains murky as well: just how powerful is he? How has the military invented a sentient android with realistic human features and flesh just 15 years from now? Is he a fully synthetic creation, with an artificial brain or is there a human component to him, a la something like RoboCop?

None of this is addressed, which is a shame as it could have formed the basis of a much more interesting movie. Instead Mackie at one point starts talking shit to Harp about the latter’s sex life and wedding plans–not because it’s important or something Leo is programmed to do, but because it’s Anthony Mackie (who’s also listed as a producer) and somebody figured that you can’t put Anthony Mackie in a movie and not let him get smart-alecky at some point, even if he is a robot.

Håfström handles the action sequences fairly well (even if the “gumps” never rise above the level of adequate-to-dodgy CG), and there are some evocative settings, such as the empty nuclear complex in which the film’s climax takes place. The director inexplicably throws some split-screen into the movie too near the end, perhaps as a way to build tension. But it only serves as a distraction since we’re not heavily invested in what’s happening.

That’s really the entire problem with Outside the Wire: it’s generally well-made, has some appealing actors in it (although even the normally edgy Michael Kelly, as a colonel who gets involved late in the game, is oddly muted here), and on the surface deals with ideas and situations that could make for a gripping scenario.

Yet the story and characters are so generic in their execution that nothing really sticks.  Even the title–while probably a product of audience research–doesn’t reflect what the actual story is about. The whole movie instead reflects the process by which it was most likely made, and feels as pre-programmed and faceless as the robots that clump around in it.

Outside the Wire premieres this Friday, Jan. 15 on Netflix.

Nadhim Zahawi settled tax issue with HMRC while he was chancellor, Sky News told
Twitter accused of being behind on rent once again – and this time, it involves King Charles
For the first time on UK soil, Amazon workers are going on strike today
Murdoch abandons bid to reunite News Corp and Fox Corp
The Boot’s Weekly Picks: Lauren Morrow, Mae Estes + More