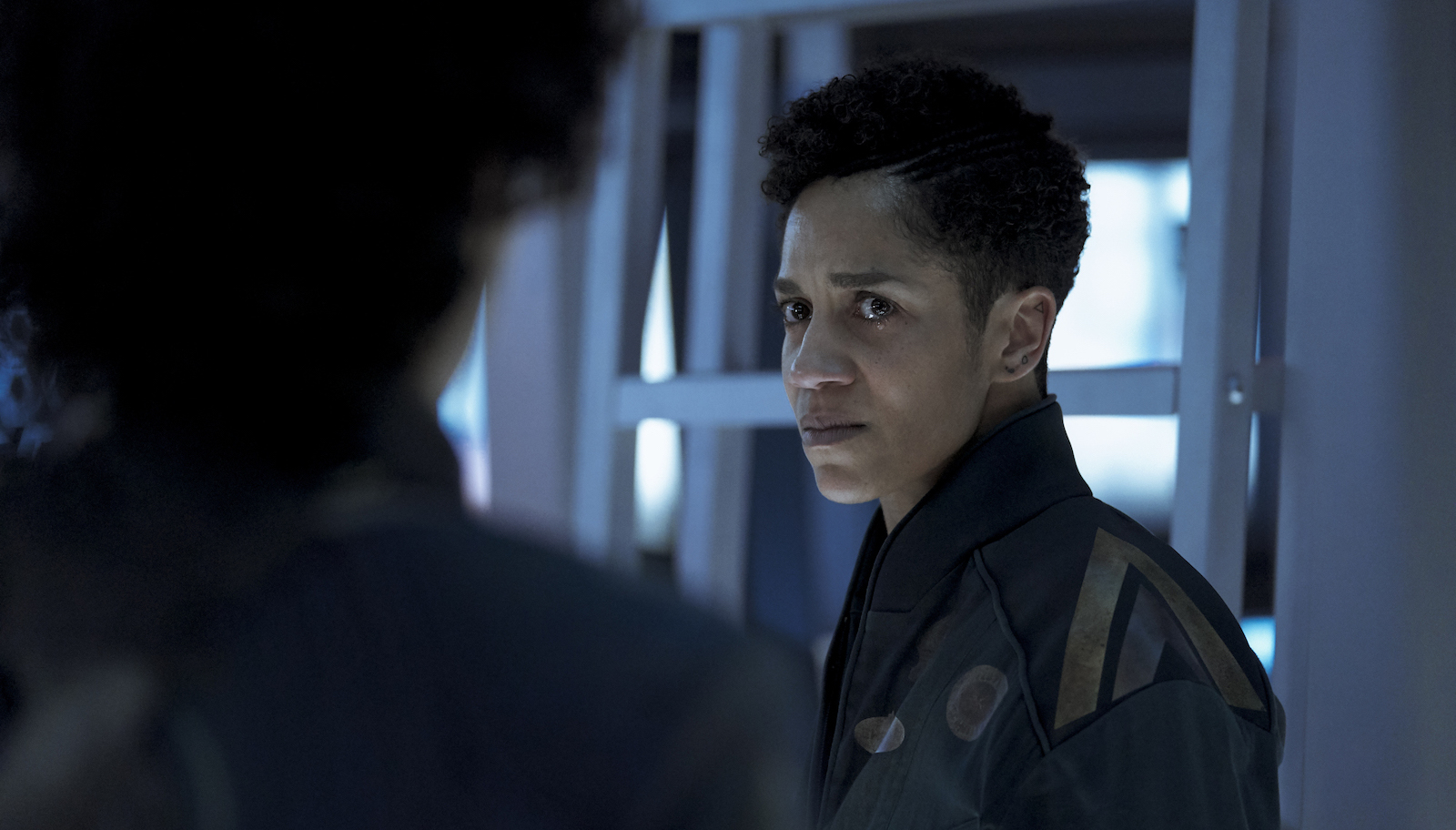 This The Expanse review contains spoilers.

There may be some division among The Expanse fans as to the effectiveness of this episode, particularly in its decision to focus mostly on the drama between Naomi, Marco, and Filip. Perhaps some were struck by the surprising relevance to current events of the dangers presented by a charismatic demagogue, while others found themselves wishing for more action like the battle between the Rocinante and the Zmeya or more Amos on Earth. But what better way to present such a shocking conclusion?

Establishing how corrosive Marco’s manipulative narcissism has been to both Naomi and Filip was crucial in explaining Naomi’s desperate move at the end of the episode. The title of the episode is “Oyedeng,” which is an expression of farewell in Belter creole, and Naomi having to leave her son not once, but twice needed a fair amount of setup to maximize the impact of that decision. Watching Filip start to emerge from his father’s shadow only to have him pulled back into his toxic orbit provided just the right emotional arc to make her actions believable and inevitable.

It’s a difficult goal to achieve considering how slippery and non-visual Marco’s abuse is. He hid Filip as a child to prevent Naomi from leaving him in the past, and he made Filip kill millions in the present but only focuses on his mistakes. How twisted does Marco have to be to tell his son, “You are nothing without me,” and then have his crew chant his name? It’s a type of villainy we don’t often see on television, mostly because it’s as subtle as it is brutal.

Still, that might not be every The Expanse fan’s cup of tea. Understanding the relationship between Cyn and Naomi, for example, may feel overly expository, but how else do you set up the moment of Naomi’s daring escape? He saw her try to airlock herself long ago, and this time Cyn died to prevent what he thought was a second suicide attempt. What Naomi will be able to do with a remotely operated Chetzemoka is anyone’s guess, but it’s likely Filip and the others think she has killed herself, which might provide an advantage.

That’s not the only heart-racing moment that keeps this The Expanse episode from being all dialogue and backstory. The conversation between Alex and Holden brings them both up to speed and allows for a spectacular space battle that highlights the Rocinante’s new combat capabilities. It’s always such a rush to see the PDCs firing away at incoming missiles, and the power of the rail gun never gets old. And that’s not even factoring in the mystery of whether the Zmeya blew up with the protomolecule onboard.

Probably not. The Expanse craftily used Bull and Monica to remind us that, although Holden is worthy of respect, he’s likely to prioritize the rescue of Naomi over the destruction of the protomolecule. Monica is definitely onto something when she makes a distinction between black market weapon sales and turning over entire gunships to the Free Navy. The question of what Mars wants with Cortazar and the protomolecule that would cause them to deal with Marco and his OPA terrorists is not a trivial one!

So yes, maybe the episode felt a bit slow at times, and the action sequences and the twist at the end seemed designed to combat that fact. However, the exploration of Naomi’s family history seemed absolutely essential to giving what happens next a solid foundation. Dominique Tipper made us feel every ounce of love and despair that we needed to justify her bold response, and it’s difficult to envision that any fan of The Expanse would be disappointed with that.

Coronavirus: L.A. County reported 3,077 more cases and 10 more deaths, Nov. 23
The Best Unexpected Board Books To Gift
We’re Being Gaslit About ‘Gaslighting’ Being the Word of the Year
Kim Kardashian and Ye reach divorce settlement – and rapper will pay $200k a month in child support
Watch Lea Michele Sing ‘Don’t Rain on My Parade‘ to Open Macy’s Thanksgiving Day Special