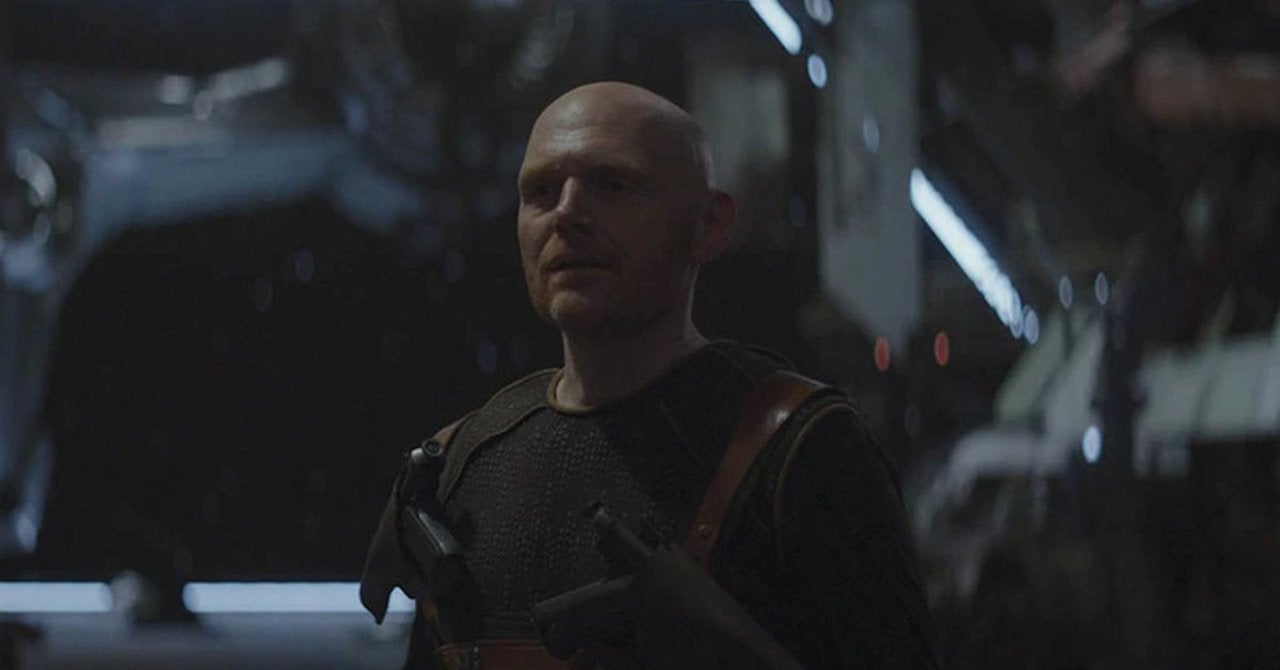 With the events of Star Wars taking place in a galaxy far, far away, some fans can’t help but wonder why the franchise will sometimes only barely conceal elements of the real world, which includes The Mandalorian fans noticing that actor Bill Burr still has a Boston accent in his portrayal of Migs Mayfield. During a recent appearance on The Tonight Show with Jimmy Fallon, Burr addressed those reactions from fans and pointed out how silly the entire franchise is, calling attention to the fact that a majority of the characters speak English or have British accents, which fans don’t seem to care as much about.

“What about English? Isn’t that a little weird?” Burr questioned on The Tonight Show. “If you went to a galaxy far, far away and you get off and somebody’s like ‘Hey, how’s it going?’ and you totally understand him?”

He added, “How about C-3PO with an English accent — that was okay? The guy’s been knighted, he just played Royal Albert Hall, now he’s hanging out with [Luke Skywalker]?”

Funnily enough, Burr isn’t the first fan to note how many British accents pop up in the saga, due in large part to how Star Wars: A New Hope was filmed in England. Despite some of the stars being American, a number of performers with British accents were enlisted for the film, ultimately resulting in multiple supporting figures in the series having distinct British accents.

The absurdity of the franchise doesn’t end at the accents, of course, as Burr couldn’t help but point out some of the other weirder elements of the series.

“What about the fact that Han Solo’s talkin’ to a Bigfoot?” Burr joked. “He’s speaking Bigfoot Han Solo’s speaking English, they never break character but one keeps going… [imitating Wookiee noises] and [Solo’s] like, ‘I said hit the button Chewie!’ And none of that! That’s all fine!”

After it was revealed that Burr was cast in the series ahead of The Mandalorian‘s debut, Burr made it no secret that he wasn’t necessarily a fan of the franchise. The actor even recently revealed that he hadn’t even watched the first season of the show.

“I haven’t really watched it,” Burr confessed on The Bill Bert Podcast. “I was hoping you weren’t gonna ask me that. It’s my list of sh-t to watch. I was gonna try, I was gonna try! I know, I’m embarrassed now. I’m gonna watch it. I watched most of the first season – I just, you know, it came out during the holidays.”

Between a third season of The Mandalorian and multiple spinoff series having been announced, fans have been left to wonder if we could see Burr return to the franchise.

What do you think of Burr’s reaction? Let us know in the comments below or contact Patrick Cavanaugh directly on Twitter to talk all things Star Wars and horror!