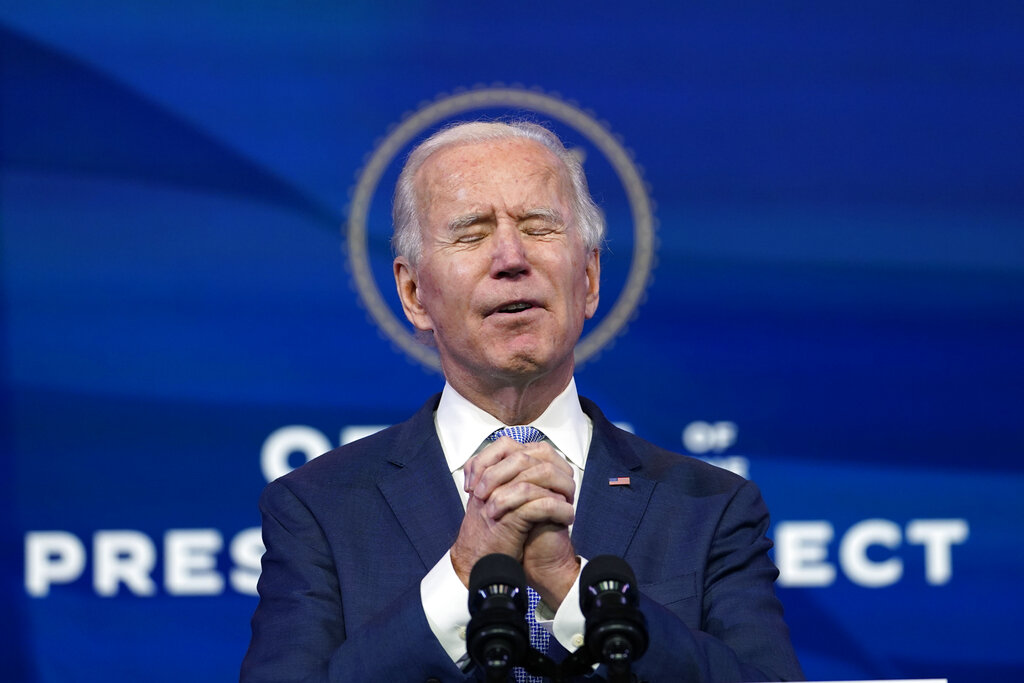 Seven days before he is scheduled to be sworn in as the 46th President of the intensely divided United States, Joe Biden today praised the House of Representatives for impeaching Donald Trump for a second time and pushed for the other business of government to move forward too.

Essentially, as he has ever since the Trump-inspired murderous assault on Congress on January 6, the President-elect walked a fine line between ending the former Celebrity Apprentice’s reign of error and kicking off his own administration.

“Today, the members of the House of Representatives exercised the power granted to them under our Constitution and voted to impeach and hold the president accountable, Biden said in a statement Wednesday after the House voted 232-197 vote to squarely blaming Trump for inciting the MAGA morons fueled insurrection on the U.S. Capitol last week.
“It was a bipartisan vote cast by members who followed the Constitution and their conscience,” PEOTUS added, noting that 10 Republicans, including House Republican Conference Chair,
Liz Cheney, joined with all the Democrats in the lower chamber.

“The process continues to the Senate,” noted Biden.

Though of course that process won’t continue quite so quickly as outgoing Majority leader Mitch McConnell announced today that “there is simply no chance that a fair or serious trial could conclude” before January 20, the day Biden and Vice President-elect Kamala Harris take their oaths of office in a locked down DC.

A reality that the former longtime Delaware Senator sought to squeeze the best out of until Democrats formally take control of the deadlocked upper chamber on January 22 – that’s when Raphael Warnock and Jon Ossoff will have their runoff results certified and they can be sworn in. With a 50-50 breakdown of seats, VP Harris will be the tie breaker on Senate business and the Biden agenda.

“This nation also remains in the grip of a deadly virus and a reeling economy,” Biden stated today. “I hope that the Senate leadership will find a way to deal with their Constitutional responsibilities on impeachment while also working on the other urgent business of this nation,” he said, while condemning Trump for inciting the “planned and coordinated” siege that was an “unprecedented assault on our democracy.”

“From confirmations to key posts such as Secretaries for Homeland Security, State, Defense, Treasury, and Director of National Intelligence, to getting our vaccine program on track, and to getting our economy going again,” Biden proclaimed. “Too many of our fellow Americans have suffered for too long over the past year to delay this urgent work.”

Sparing his shameful predecessor no shame, Biden in recent days has publicly pondered having the Senate “bifurcate” its days to handle the impeachment and getting his cabinet nominees in place.

As Biden sought to thread the needle to move the nation forward, a newly elected Congresswoman pulled back the curtain on GOP tactics with some impeachment news of her own. Fresh off wearing a mask on the House floor with the word “Censored” splayed across it, Marjorie Taylor Greene told Newsmax today that she planned to introduce articles of impeachment against Biden on January 21. The attention getting stunt from the self-avowed conspiracy theorist serving Georgia’s 14th congressional district has no chance of success with the GOP in the minority. However, first posted on social media in true Trump fashion, the move by Greene certainly shows that extremist Republicans are already in full derangement mode a week after the invasion of the Capitol

In his circumspect statement Wednesday, Biden himself made no mention of Trump’s teleprompter driven video this afternoon after the impeachment vote. Then again, the now historically two-time impeached Trump himself made no mention of the vote in his too little, too late remarks that “no true supporter of mine could ever endorse political violence.”

President-elect Biden is expected to face the socially distanced cameras tomorrow in a speech on the still surging coronavirus pandemic and the battered economy. Trump looks to have nothing on the schedule, as has pretty much been the case since the election late last year.