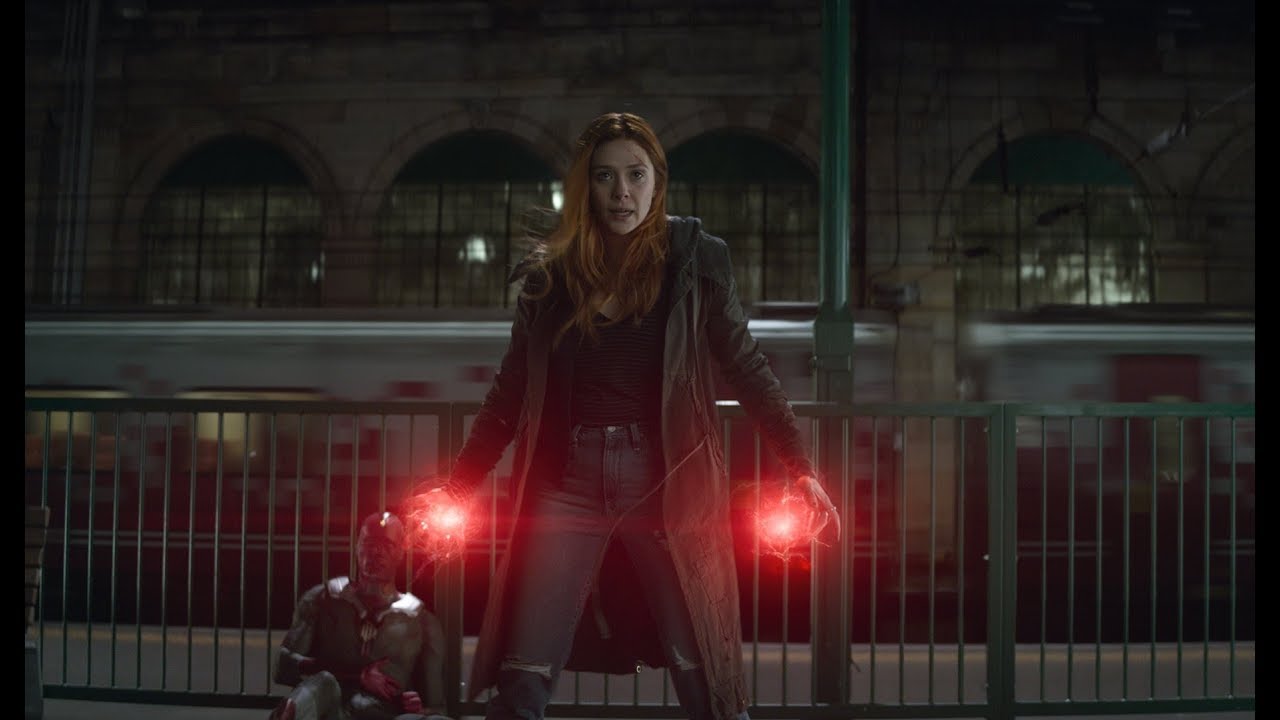 It’s been quite a long break, but the Marvel Cinematic Universe is back from hibernation in 2021, starting with WandaVision. As the climactic Avengers: Endgame and its denouement Spider-Man: Far From Home concluded Phase 3, we’ve had to wait the entire chaotic 2020 before Phase 4 could start up in 2021.

You might have a friend or relative asking you, “What is WandaVision, exactly?” and folks, that is a loaded question. Especially if they haven’t watched many or any of the Marvel movies. How do you explain a plot about an ever-evolving sitcom reality that gradually falls apart due to the complicated and traumatic relationship between a reformed terrorist with too much power on her hands and a polite android who shouldn’t even exist? And don’t get me started on the pre-existing supporting characters from other Marvel movies.

To get you or your hypothetical loved one up to speed, here’s a look back at the history of Wanda Maximoff, the Scarlet Witch, in the MCU, as played by Elizabeth Olsen.

To explain the Scarlet Witch, you have to go back to the forming of the Avengers. Once upon a time, a group of heroes from different walks of life banded together to stop an alien invasion. A powerful megalomaniac named Thanos was obsessed with obtaining the Infinity Stones, six cosmic gems that could give its wielder immeasurable power over the universe itself if fully collected. He armed his underling Loki with a mind-controlling staff and gave him his own army of alien warriors in hope of conquering Earth and getting his hands on an artifact known as the Tesseract.

The Tesseract and the gem powering the staff were both Infinity Stones (the Space Stone and the Mind Stone, respectively). Loki was ultimately defeated by the Avengers. While the Norse Gods held onto the Tesseract for safekeeping, the staff ended up in the hands of the worldwide government agency SHIELD.

Having saved the day, the Avengers were beloved by many. But not everyone.

In Captain America: The Winter Soldier, Steve Rogers discovered that SHIELD had been compromised by HYDRA, a science-obsessed offshoot of the Third Reich. For many decades, HYDRA personnel had infiltrated SHIELD and used its resources for its own nefarious ends. In the end, Captain America defeated HYDRA’s plot, but a mid-credits scene showed that the organization was not yet destroyed.

At some point, HYDRA operative Wolfgang Von Strucker got his hands on Loki’s staff and was able to experiment with the Mind Stone. Two test subjects were able to survive the experiments: Wanda Maximoff and her twin brother Pietro.

The two came from the fictional country Sokovia, where they were orphaned by munitions created by Tony Stark’s company. Hating Tony Stark and the Avengers in general, the two allowed themselves to be made guinea pigs by Von Strucker. The Mind Stone unlocked special abilities in the two where Pietro – known as Quicksilver – gained amazing speed powers while Wanda – the Scarlet Witch – could do everything from energy manipulation to telekinesis to mind manipulation and flight.

The Avengers got together for what was supposed to be one last hurrah as they sieged the last stronghold of HYDRA in Avengers: Age of Ultron. While they made short work of Strucker’s goons, they ran into trouble with Scarlet Witch and Quicksilver. Ultimately, the twins escaped, though Scarlet Witch messed with Iron Man’s head and increased his paranoia that another alien invasion would one day arrive and crush Earth’s heroes.

Tony Stark and Bruce Banner ran their own experiments on the Mind Stone and tried to create a world-protecting AI out of it. Upon being born, the AI immediately went mad and took the form of a genocidal robot with the personality quirks of Stark. Ultron sought out the Maximoffs and recruited them against the Avengers.

Wanda did her damage against the Avengers by screwing with their heads one-by-one and making them live out their personal nightmares. The most disastrous part of this was how she caused the Hulk to lose control and go on a massive rampage. Although he was eventually subdued by Iron Man, the Hulk’s freakout caused massive cracks to appear in the Avengers’ reputation.

Scarlet Witch and Quicksilver ultimately turned against Ultron after realizing that he wanted to wipe out billions of lives as part of his plan to “save humanity.” They teamed up with the Avengers to defend Sokovia against an army of Ultron drones. During this time, Wanda found herself mentally overwhelmed by the battle, but Hawkeye was able to motivate her into continuing the fight.

Quicksilver sacrificed himself to save Hawkeye’s life, filling Wanda with dread and anger. She ended up destroying Ultron’s main, most powerful form. Soon after, all of Ultron’s drones were annihilated and he was fully defeated.

Scarlet Witch joined the new Avengers roster, made up of herself, Captain America, Black Widow, War Machine, Falcon, and Vision. Vision, a more human-looking android created by Ultron, was powered by the Mind Stone and had it sticking out of his forehead.

A mission in Lagos, Nigeria went terribly wrong at the start of Captain America: Civil War. Although the Avengers were able to defeat the terrorist Crossbones, he detonated a bomb on his body in hopes of taking some of the heroes with him. Scarlet Witch tried to move Crossbones’ exploding body away from the area, but accidentally killed many others in a nearby office building.

While it was an accident, it was also the straw the broke the camel’s back. The Sokovia Accords was written up, making the Avengers’ existence a legal matter. In order for them to fight the forces of evil, they had to do so under the orders of the world’s governments. The superhero community disagreed on this ultimatum, causing a massive rift in the Avengers.

The guilt-ridden Wanda remained at Avengers Headquarters, where she bonded with her teammate Vision. While they became close, it was also apparent that Vision was there to keep her from leaving the premises, as certain members of the team thought it would be unwise for Wanda to be seen in public. Hawkeye arrived to recruit Wanda onto Captain America’s side of the war against Iron Man and the Sokovia Accords. While Hawkeye was out of his league against Vision, Wanda’s powers and connection to the Mind Stone allowed her to easily counter the android.

A massive battle took place between Captain America and Iron Man’s teams. While Captain America and his friend Bucky were able to escape, Wanda and the rest were defeated and taken into custody. She, Hawkeye, Falcon, and Ant-Man ended up in a special island prison with high-tech restraints keeping her from being able to use her powers. As Iron Man came to see the prisoners, the other three threw verbal abuse his way. Wanda just remained silent.

In the end, Captain America returned to free the prisoners. A new “Secret Avengers” team was put together of Captain America, Black Widow, Falcon, and Scarlet Witch. Together, they would do missions from the shadows, against the authority of the government.

Having figured out the locations of all six Infinity Stones, Thanos decided to make his move. His intent was to gather the six gems, snap his fingers, and use their power to remove half of all life in the universe. It was his own twisted plan to prevent universal overpopulation. While this was bad news for everyone, it was especially bad news for Vision.

Wanda strayed away from her Secret Avengers team in order to have a romantic relationship with Vision. As the two vacationed in Scotland, they were attacked by some of Thanos’ lieutenants. The Secret Avengers appeared and rescued them.

Logic stated that in order to stop Thanos from achieving his goals, they would have to destroy the Mind Stone. While Scarlet Witch could theoretically use her powers to blow it up, doing so would kill Vision. She refused to do so and Captain America backed her up. Instead, they went to Wakanda, where they could seek sanctuary from Thanos’ forces and get the technology and knowhow needed to remove the Mind Stone from Vision without killing him.

While Thanos was busy gathering the other Stones through the cosmos, his forces invaded Wakanda. Scarlet Witch was forced to abandon Vision’s side in order to help fight the aliens. She and her allies were successful in taking out Thanos’ top henchmen, but by the time Thanos appeared in Wakanda, there was virtually no time left. Vision was still attached to the Mind Stone and the only options were to have Wanda destroy it along with Vision or allow Thanos to take it himself. Either way, Vision was doomed.

With a heavy heart, Scarlet Witch manipulated the Mind Stone into exploding, killing her true love. It was an empty gesture as Thanos wielded the Time Stone and was able to rewind the event. This time, Thanos tore the Mind Stone from Vision’s head and left the android’s corpse behind. Soon after, he snapped his fingers and caused half of the universe’s population to vanish into dust.

A distraught Wanda Maximoff was one of those victims.

The surviving Avengers took the fight to Thanos, only to discover that he had already forced the Infinity Stones to self-destruct on their own power. Thor angrily killed Thanos and the universe had to spend five years grappling with the loss of countless lives.

Earth’s heroes finally figured out a plan to bring everyone back by using time travel to gather the Infinity Stones. The good news was that their plan worked. The bad news was that the “time heist” got the attention of Thanos from ten years earlier, who was able to bring a massive army into the present and wage war.

Doctor Strange – one of those who returned from oblivion – appeared along with all of the missing heroes and hundreds of warriors from different parts of the universe. Although this incarnation of Thanos was not familiar with Scarlet Witch, the furious Wanda overwhelmed him with her powers and nearly tore him apart. Thanos had his warships fire at the battlefield in order to free himself at any cost. Scarlet Witch continued to annihilate anyone in her way while Thanos was ultimately defeated by Iron Man. Thanos and his forces were turned to dust after Iron Man activated the Infinity Stones.

Wanda appeared at Tony Stark’s funeral, where she and Hawkeye gave each other support for the deaths of Vision and Black Widow.

Through her story, Wanda had lost her parents, her brother, her boyfriend, and for several years, her life. She’s responsible for much death and destruction and has to live with that. Now she’s the star of WandaVision, where she and Vision get to live out their “happily ever after.”

Except…Vision is still dead. Or is he?

In the comics, Wanda has always had a bad habit of falling into her powers as a way to deal with trauma. At least once she has irresponsibly altered history/reality with her scarred mind and it looks like that behavior is about to make its way to the MCU.

WandaVision premieres on Disney+ on Jan. 15.