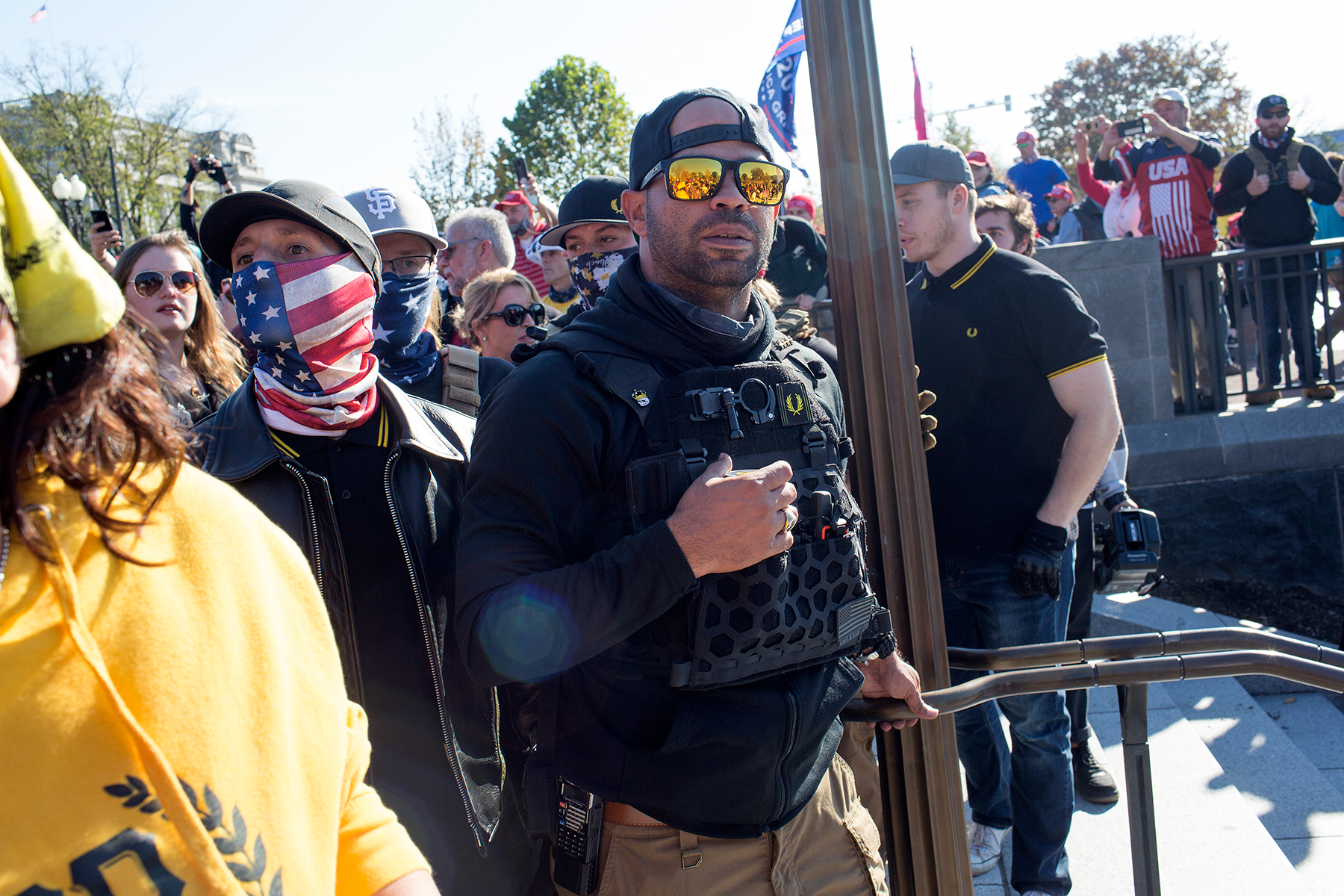 In light of mass deplatforming on big tech social platforms like Twitter, as well as the right-wing social network Parler doing dark on Sunday night, everyone from casual Trump supporters to far-right militants are flocking to alternative social networks such as the encrypted messaging apps Telegram and Signal. On Tuesday, Telegram announced that it had increased by 25 million users over the past few days, bringing its total user base to 500 million people.

Many of these new users have flocked to far-right extremist channels (essentially, group chats), where they are being subject to increasingly heated rhetoric, including threats of violence and organizing further during Inauguration Week. In particular, the Proud Boys, a far-right extremist organization that had a major presence at the storming of the capitol last week, is making a substantive play at organizing on the platform. Two major Proud Boys channels on Telegram, which Rolling Stone is declining to name, have exploded in use by at least 69 percent and 83 percent since January 5th, according to data from author of Against the Fascist Creep and professor at Portland State University Alexander Reid Ross, which he shared with Rolling Stone.

‘I Don’t Think She Deserved to Die’: Black Activist Who Filmed Ashli Babbitt Shooting Speaks Out

‘We Are Better People Because of John Lennon’

What’s more, their rhetoric has intensified. Even prior to the storming of the capitol on January 6th, one major Proud Boys channel run by one of its state chapter heads, which has a little more than 32,000 subscribers as of publication time, published a call for action after leader Enrique Tarrio was arrested and charged with a misdemeanor count of destruction of property after allegedly burning a Black Lives Matter banner stolen from a D.C. church.

“Proud Boys stand up to the mob and our people get arrested. Not a peep from the GOP. It’s evident that anyone who stands up to the Marxist insurrection will made an example of,” the post read, concluding with, “Here’s the point: there is no political solution.” Another post reads, “They want you to shut up and comply, and they are warning you of what will happen if they don’t. What will you do, will you lay down and die the thousand deaths of a coward, or will you fight back against tyranny?”

Though they refer to themselves as a “pro-Western fraternal organization,” the Proud Boys are a “violent, crypto-fascist extremist organization,” as Samantha Kutner, a former consultant for the anti-extremism group Light Upon Light previously told Rolling Stone, that has espoused racist, misogynist, and violent views and is classified as an extremist group by the Southern Poverty Law Center. Several members of the Proud Boys were identified as having participated in the insurrection at the capitol, according to Vice News.

Ross says the influx of people on the far right to Proud Boys channels can be explained by a number of different factors, such as disillusionment with the GOP following many Republican lawmakers calling for the impeachment of Trump and distancing themselves from the rioters at the capitol insurrection. “Trump is seen as having abandoned the movement…and the right is delinking from ‘the political solution’ out of desperation driven by conspiracy theories,” he says.

Kevin Grisham, associate director at the Center for Hate and Extremism, says Parler being dropped by Amazon Web Services played a huge role in driving people on the right to more extremist hubs like Telegram, where they have been increasingly exposed to even more radical arguments. “What we’re seeing right now is because of the deplatforming, all those people on Parler who were not Proud Boys but believed in Trump’s arguments and points, were creating similar channels on Telegram as Parler was getting ready to be taken down,” he says. “Now you have people who may have never had much interaction with Proud Boy people and are now on a platform that Proud Boys have traditionally had presence.”

Telegram has long served as a platform for extremist groups due to its relatively lax content moderation policies, with extremism researchers referring to such channels as “Terrorgram.” As other outlets have reported, it currently is operating as a hub for far-right groups to organize in advance of Inauguration Day next week, with the FBI issuing a warning that there was evidence of protests and other unrests being planned in all 50 state capitols on Inauguration Day. The National Mall in Washington, D.C. will be closed due to the military’s safety concerns, and Airbnb has announced that it will cancel and block D.C. reservations during inauguration week.

Despite these reports, the Proud Boys are at least publicly trying to distance themselves from such organizing on its larger channels. “We at Proud Boys will not be taking part in any protests at any state capitols coming up,” one post reads. “If you see anyone dressed as a Proud Boy out at one of them, they’re either a fed or antifa.” The arrests of Tarrio and numerous rioters following the insurrection at the Capitol are playing a role in this calculus, says Grisham, due to concerns about the feds closely watching, or Telegram shutting down similar channels: “They are realizing people are looking at them closer than before.”

While the Proud Boys may be saying they will not play a role in any unrest that may occur next week, that doesn’t mean they are tampering down their rhetoric. “If you think back to the debate where they were called out [by Joe Biden] and called a white supremacist organization and they came out and said ‘no we’re not,’ what’s been interesting is since the protests, you’re starting to see this shift…. They are really starting to put their ideology out there, like ‘this is what we truly stand for,’” says Grisham. “I think they’ve realized they can take the mantle of some of these other extremist groups” such as QAnon or white supremacist organizations, which are decentralized, fragmented, and floundering in the wake of Trump’s downfall. He is particularly concerned about cross-pollination with the boogaloo movement, which has also been organizing and recruiting on Telegram: “that mixing could create some really dangerous situations,” he says.

As for Trump himself, following his second impeachment, he issued a statement urging that there be “NO violence, NO lawbreaking, and NO vandalism of any kind” on Inauguration Day. Ross says that considering how disillusioned far-right extremist groups like the Proud Boys currently are with Trump, such a statement is effectively useless. “Now that [far right groups] don’t have any claim to political power, they don’t have to worry about ‘optics’ and gaining GOP support anymore. The Alt Right method of political entryism becomes more or less useless,” he says. “[With] the decay of populist forces, you get entropy where innumerable possibilities and recombinations become suddenly possible, some with extraordinarily volatile potential.” And even if the Proud Boys don’t necessarily show up, if the events of last week have proven anything, others certainly will.

SaaS Security Posture Management (SSPM) as a Layer in Your Identity Fabric
Guests Wait In Record Lines For One Last Ride Before Disney World’s Splash Mountain Shuts Down For Revamp
How do prepayment meters work and why is there a crackdown on them?
Samsung Galaxy Store App Found Vulnerable to Sneaky App Installs and Fraud
Press Start to Play: 2023’s Most Anticipated Video Games