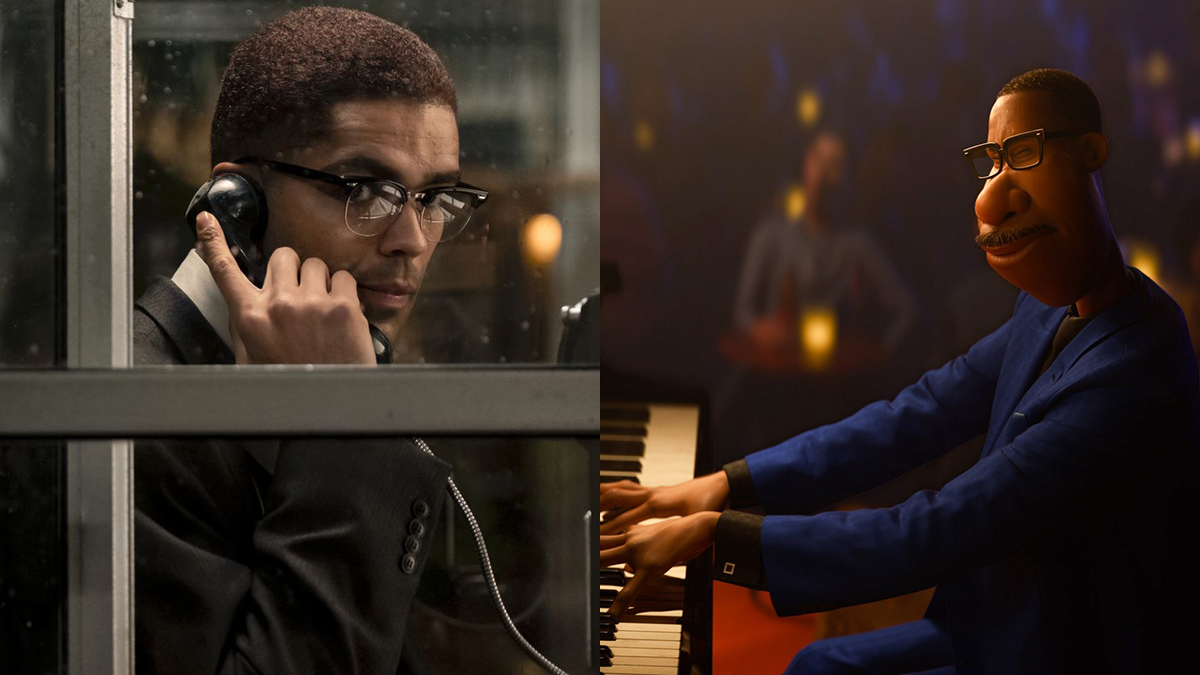 It’s one of the most kinetic moments in One Night in Miami. As a character observes, the banter is over and friends are pulling out knives: Kingsley Ben-Adir’s Malcolm X just challenged Leslie Odom Jr.’s Sam Cooke on his responsibility as a Black artist to the Black community.

“You bourgeois negroes are too happy with your scraps to know what’s at stake here,” Malcolm says, demanding Sam take advantage of this elusive thing called celebrity and speak up for all those voices who never got a mic. Yet to Cooke—an artist with his own record label that keeps the rights of Black music in Black hands—this is the height of hypocrisy.

“Everybody talks about how they want a piece of the pie,” Sam counters. “Well, I don’t. I want the goddamn recipe.”

Even for a younger audience who may not be familiar with Cooke’s music, or Malcolm X’s autobiography, the debate of social responsibility in American life rings as urgently in 2021 as it does in the film’s 1964 setting—and it echoes acutely too for Kemp Powers, the writer who penned One Night in Miami twice: first as a play and now a film. He can hear it in his debates with other Black artists over the years, and between the lines of books he’s read about each of the men in his story—he can even hear the debate waging in his own head, whether it’s while authoring a passion project like Miami or co-writing and co-directing Soul, the first Pixar film to star a Black man.

“It’s a debate that’s been happening since long before that night between Malcolm and Sam,” Powers says over a Zoom call. “It’s a debate that still happens now, and is a question that I think Black creatives ask ourselves all the time. What, if any, social responsibility do we have as a Black athlete, artist, or public figure? There’s no real clear answer to it, but that being said, almost everyone has an opinion.”

Powers has entertained several over the years, sometimes at the same time. In his youth he may have more clearly favored Sam’s pragmatic sensibility of working within the system, but at age 47 he has long realized, “I can see myself as just a writer or director, or whatever, but society is going to call me a Black writer-director whether I want it or not.” Thus the question becomes how to manage that reality, whether as a playwright or one of the four most influential Black artists, athletes, and leaders of the mid-20th century.

“So many people have asked me about, who do I think is right, Malcolm or Sam?” Powers reveals, remarkably without sighing. “That misses the point, because ultimately the argument they’re having is just the inner monologue that goes on inside my head all the time… and the answer is it’s situational. Some days you got to be like Sam about it, and other days you got to be like Malcolm about it.”

And sometimes you have to be both on the same day.

Indeed, Powers first put One Night in Miami out into the world as a play in 2013. Back then he had no aspirations of becoming a filmmaker. And yet, by the time a film adaptation gained momentum, he’d already begun working with Pixar in Emeryville, California on retooling Soul as the story of a jazz musician in a real existential crisis. The two films, technically speaking, were released on the same Christmas Day, and One Night in Miami is now having its streaming premiere on Amazon Prime Video a few weeks later.

The serendipity of the complementary releases amuses Powers, as does the strange coincidence that Miami would take such a winding path to the screen that it’d catch up with him as a filmmaker. Still, even between these two movies, Powers sees that same internal debate now playing across multiple streaming services.

“My Sam and my Malcolm are on full display with Soul and One Night in Miami as a writer,” Powers chuckles. “You’re seeing me work within an existing system to try to bring about some positive change that might not be fast enough for some people, but it’s a quantum change; it’s a massive, massive change at this huge company that hasn’t had a lot of representation for us, and at the same time you’re seeing me unfiltered in an independent film where I literally can write whatever I want, and it just goes out there unfiltered. So you’re seeing how both can be positive and effective, right?”

It can also mean historical figures jokingly referenced in Soul like Muhammad Ali—who appears as one of 22’s mentors in that film—can also take a spotlight role via One Night in Miami. In fact, Ali is the crux of a curious historical detail Powers turned into a fascinating fiction. On the night Cassius Clay (an uncanny Eli Goree in the film) took the heavyweight championship of the world from Sonny Liston by TKO, the 22-year-old champ chose to celebrate the victory by quietly hanging out in a motel with his mentor Malcolm X, and pals Sam Cooke and Jim Brown (Aldis Hodge). The next day, Clay officially changed his name to Cassius X and announced his joining of the Nation of Islam.

All of that actually happened. But what did they say to each other that night before Cassius took the first step to becoming Ali? And did it cause Cooke to write “A Change is Gonna Come?” Very few details are truthfully known—Powers even reveals one of the few concrete facts is that they were served pints of vanilla ice cream that night (alcohol is forbidden by the Nation of Islam). But then Powers was one of the first to extensively consider the ramifications of all four men in one place at one significant time.

“Usually when you see that night mentioned, it’s mentioned in the context of a story that’s focusing on only one of them,” Powers says. That’s how he came to learn about it, as a minor detail in Mike Marqusee’s Redemption Song: Muhammad Ali and the Spirit of the Sixties, which Powers first picked up about 15 years ago.

“Obviously the focus was very much on Muhammad Ali throughout the entire book,” Powers says. “So it’s a coincidental fact to the writer of the book, who’s focusing on Muhammad Ali, who was not going to see it through the way I was seeing it. [Between] all of them, what is the power dynamic? What’s the friendship like between four guys who were not just influential, but [were] also in different disciplines?”

Powers likens it to the Rat Pack, which was primarily composed of Frank Sinatra, Dean Martin, and Sammy Davis Jr., among others. To this day, popular culture idolizes and deifies them as best bros playing cards and crooning ballads in Las Vegas. “And they’re all singers!” Powers contends. “But I think this is like that on an exponentially different level, because they’re not all the same thing. You have an entertainer, you have an athlete, you have a political activist.”

Ultimately, Powers jokes they’re a bit like the Black Avengers, with each having been romanticized to the point of becoming superhuman in pop culture over the decades. It’s certainly how Powers came to them, with the scribe having a special affinity with Malcolm X after reading his autobiography as a teenager. “It’s a formative experience shared, I think, with a lot of Black men of my generation.”

Sam Cooke, who he came to later, was his grandmother’s favorite artist; Jim Brown represented Black strength to a whole generation, and took on a mythic aura by the time Powers came of age; and Ali was just on a whole other plain of existence. “Ali was a hero of mine growing up and I didn’t even know why,” Powers muses.

Yet upon learning all four shared the same space, he found an excuse, and an opportunity, to imagine what these men said behind closed doors and among ostensible equals. In the process, Powers could use literary license to also dive deeper into each of these four men’s towering iconographies, and what lay beneath.

“I wanted to definitely show the private version of all four men. The whole point of them being in this private space away is that we’ve seen so much of them in the public eye.” But in One Night in Miami, each looks strangely more comfortable sitting with their own thoughts, whether that means by strumming a guitar or holding a camera—thereby removing himself from the other three—than on stage or in the arena.

The writer credits director Regina King with making those fleeting moments that aren’t in his original play crackle with energy—the half a round we see of Clay dominating Liston or the glimpses of Cooke winning over a crowd, while also feuding with Jackie Wilson, no less. But unlike so many conventional (and often meandering) biopics, there is an emphasis here on specificity of narrative, and specificity of these men’s characters.

Says Powers, “With a snapshot, you have the freedom of focusing on who that person was at that moment of time. You don’t have to bring them into this modern context and be like, ‘Well, how is this person perceived now?’” He adds, “I feel like with two hours or less, I want to focus on that humanity.”

With One Night in Miami, and even Soul, Powers finds theirs, as well as reveals his own.

One Night in Miami is streaming on Amazon Prime video now.