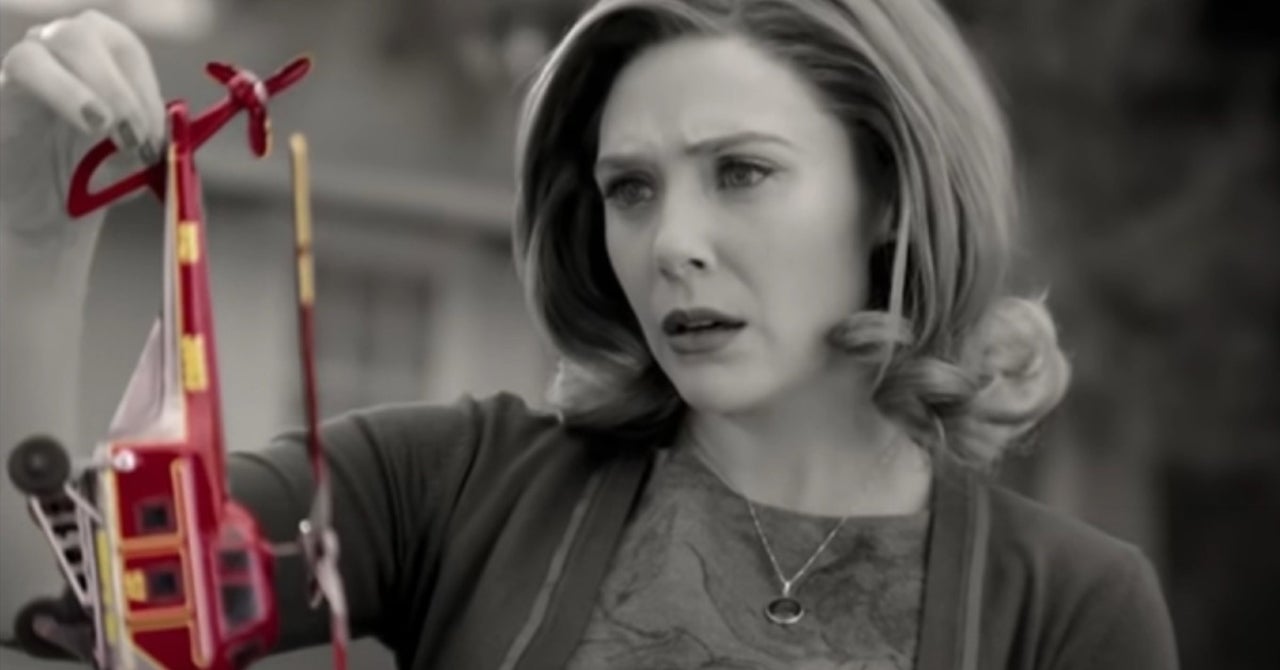 The first two episodes of WandaVision are finally here and there is a whole lot to unpack as Marvel’s Phase Four kicks off. We saw Wanda Maximoff (Elizabeth Olsen) and Vision (Paul Bettany) living the suburban life in a classic 1950s and 1960s sitcom fashion, but it’s not all wacky shenanigans and mishaps in the town of Westview. Something sinister is going on and there are a lot of theories floating around already. One of the first things that seem amiss in Wanda’s new world is when she discovers a toy helicopter in the bushes. However, it’s in color, which is pretty odd considering the first two episodes of WandaVision are in black and white (think Pleasantville!). The question is: What is the significance of the helicopter? We have some theories, but beware, some spoilers for the first two WandaVision episodes are ahead….

The first burst of color in WandaVision is Wanda’s discovery of the “toy” helicopter. Our best guess is it’s in color because it crashed into Wanda’s reality, meaning it’s not part of the world she has seemingly created. Considering “Geraldine,” who we know is actually Monica Rambeau, shows up soon after, it’s likely this was a real helicopter SWORD sent in to keep an eye on things. Based on the end of the first episode, it appears SWORD is watching the events unfold, and they probably wanted to send Monica in to help control whatever the heck is going on. This could also explain how the beekeeper got in at the end of the second episode. Another interesting thing to note is that the helicopter featured the number 57. Avengers #57 happened to be Vision’s first appearance in Marvel Comics. Coincidence? Probably not… But anything is possible in the Marvel Cinematic Universe!

As for Monica, who is now being played by Teyonah Parris, Marvel Studios president Kevin Feige recently teased the character’s importance in WandaVision.

“The notion of Monica Rambeau in this series was very natural; needing a particular type of role and a particular type of storytelling device, that at Marvel can become more than that if we make it a character that we know we have stories for,” Feige explained. “That unlocked a whole new aspect of the show.” He added, “We always knew that Monica would have a future within the MCU … The ability to further meet her as Teyonah Parris in this series, before the movie, was this organic shift.”

What are your WandaVision theories? Tell us in the comments!

The first two episodes of WandaVision are now streaming on Disney+.