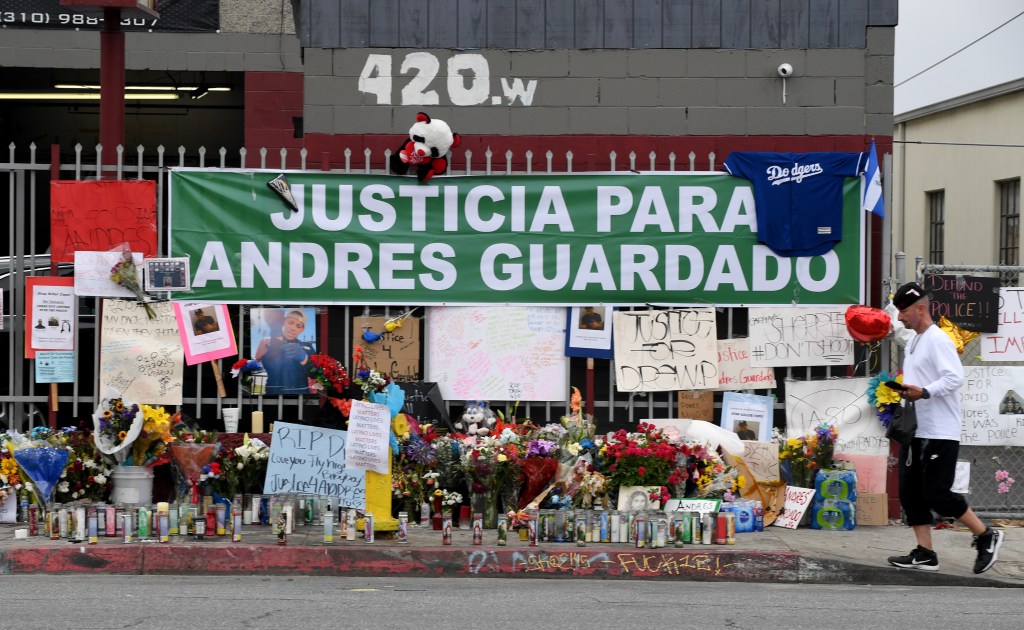 The findings of an inquest into the death of 18-year-old Andres Guardado, who was killed near Gardena during a June encounter with two sheriff’s deputies, were released Friday evening.

The four-page report, prepared by retired Justice Candace Cooper, who has served on the California Court of Appeals, does not offer any information not already known to the public and concludes that the teen died by multiple gunshot wounds on June 18 in a driveway at 420 West Redondo Boulevard.

Guardado’s death “was at the hands of another person other than by accident,” the report said.

“Justice Cooper has confirmed what we knew all along,” said Cristobal and Elisa Guardado, parents of Andres Guardado, in a statement released after findings of the inquest were made public. “We now call upon District Attorney Gascón to do what the Sheriff’s Department has not, and that is to take action and hold these deputies accountable for their criminal actions.”

The county coroner’s office previously reported that Guardado was shot in the back five times and ruled his death a homicide. County supervisors requested the coroner’s office to order the inquest, the first of its kind in more than 30 years, to ensure transparency.

Protests erupted shortly after Guardado’s death, demanding justice for the teen, many refuting the circumstances laid out by authorities.

Cooper, who presided over the inquest hearing on Nov. 30, was given sealed documents related to the Sheriff’s Department’s investigation, which were subpoenaed by the coroner’s office. She also heard testimony presented at the hearing from coroner’s officials, two firefighters, a forensic pathologist and a multimedia journalist.

Deputy Miguel Vega, who fired the shots that killed Guardado, had submitted a declaration to Cooper, saying that he would remain silent and invoke his Fifth Amendment rights if called to the hearing.

A sheriff’s detective and a sheriff’s homicide investigator also invoked the Fifth Amendment at the November hearing and declined to answer questions.

Cooper wrote in the report that she decided not to challenge Vega’s constitutional rights and that no further evidence or witness testimony was necessary.

Before 6 p.m. on June 18, the two deputies were on patrol when they spotted Guardado, 18, speaking with someone who was inside a car that was blocking the entrance to businesses on Redondo Beach Boulevard, east of Gardena in an unincorporated part of the county.

The deputies said, through their lawyers, that they saw a firearm protruding from his waistband. Guardado then ran between two businesses after seeing the deputies and was shot by one at the end of a driveway.

Deputy Vega ordered the teen to drop the weapon and lie down on his stomach, his lawyer has said. As Vega went to place on handcuffs, Guardado suddenly reached for the weapon, which was near his right hand, prompting Vega to fire, the attorney claimed.

During the November hearing, Dr. Kevin Young, a deputy medical examiner with the county coroner’s office who performed the autopsy on Guardado, testified that it was possible Guardado was on his knees when he was struck by the first of five gunshots to his back, noting the downward trajectory.

That statement contradicted the statement released by Vega’s attorney that said Vega was walking forward to place handcuffs on Guardado as the suspect was on his stomach when Guardado reached for the handgun, prompting Vega to open fire.

Guardado’s parents filed a wrongful death lawsuit in Los Angeles Superior Court in August, claiming that their son never posed a threat to the deputies when they chased and shot him.

“Andres was a good person with his whole life ahead of him,” his parents said in the statement. “That life was violently taken from him, and we suffer the consequences as his killers remain free. Our family will not rest until we have justice for Andres.”