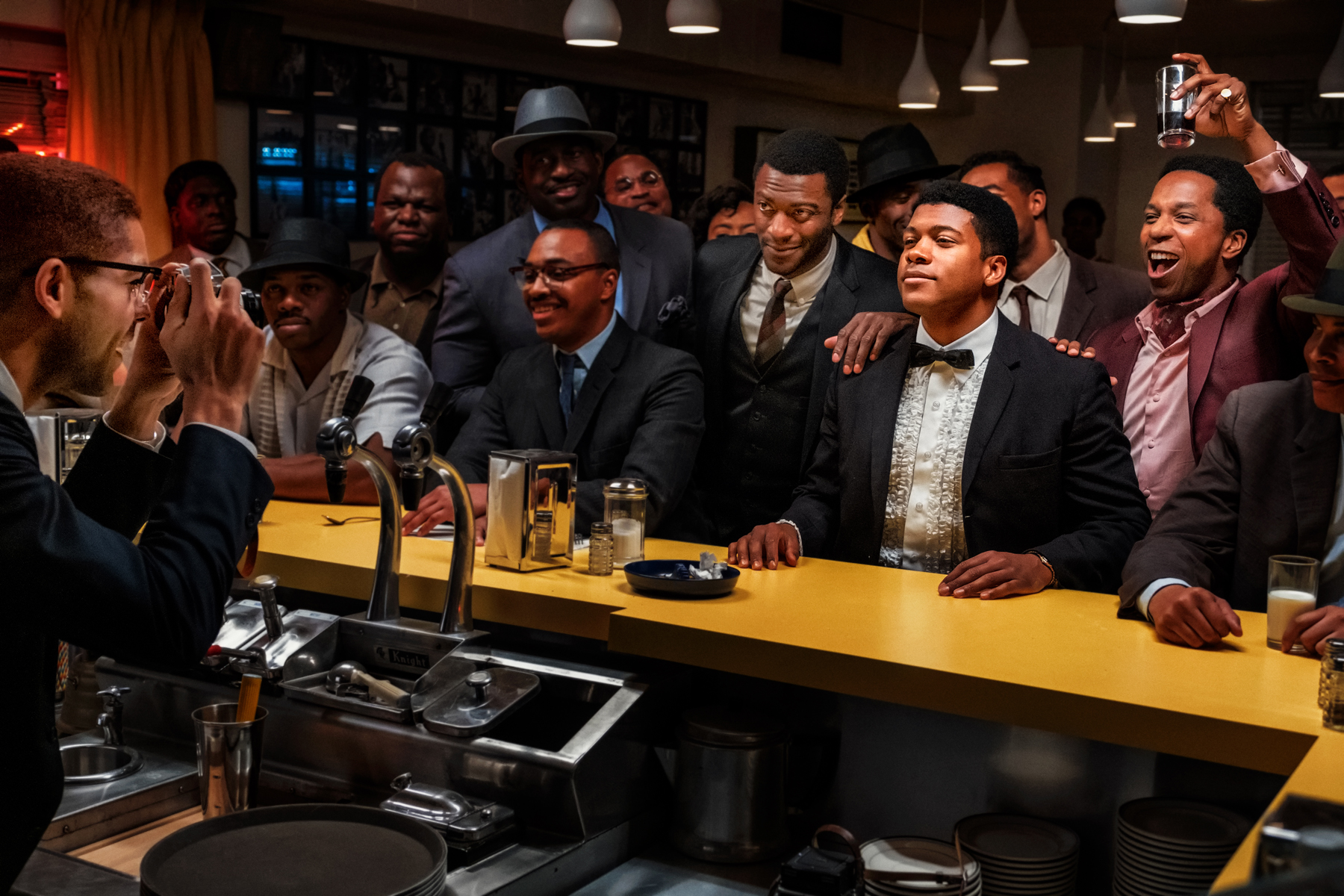 It’s supposed to be a celebration. On a balmy night in Miami, in February 1964, four friends — Malcolm X, Cassius Clay, Jim Brown, and Sam Cooke — get together in a humble room at a black-friendly hotel, bypassing the environs of the nicer, whiter Fountainbleau nearby. The occasion: the 22-year-old Clay’s surprise title win over Sonny Liston. Their vice: a tub of ice cream. At the door, men from the Nation of Islam stand guard over this powerhouse gathering of mid-century black celebrity. Across the street, a pair of unknown white men are also, in their own way, standing guard, and collecting intel. The troubled and wary Malcolm, reeling from ongoing conflicts with the Nation, was the party planner. Hence the lack of booze and women — neither of which are needed to stir up the joys and frictions that come to define this night.

That’s in part because, as skillfully dramatized by Regina King’s One Night in Miami, which begins streaming on Amazon on January 15th, the night hinges on another complicated triumph for Malcolm (played by Kingsley Ben-Adir) and Cassius (Eli Goree) in particular. The boxer, soon to be known as Muhammad Ali, has decided to convert to Islam and is on the cusp of announcing as much to the public at large. The beleaguered political figure who’s mentored him, meanwhile, feels that he’s on his way out … one way or another. By this point, Malcolm has already called white men “devils” and been publicly reprimanded for his brash remarks on the assassination of John F. Kennedy; his suspicions are that the jig is up. He takes a call to his family on a public pay phone, because he suspects that the hotel might be bugged. He’s planned his life-changing trip to Mecca and his divorce from the Nation and its leader, Elijah Muhammad. He has begun meeting with the then-young Alex Haley, interviewing for what will become his and Haley’s Autobiography of Malcolm X, an effort which, you sense from this movie, is undertaken with the urgency of a man who feels he only has so much time left.

Long May She Reign: How Regina King Conquered Hollywood

He’s right about that. Miami is set almost exactly a year, give or take, before Malcolm will be gunned down in front of his family and supporters at the Audubon Ballroom in Harlem. It’s a year before Jim Brown (Aldis Hodge) will retire from a sterling NFL career with the Cleveland Browns to become an actor. Cooke (Leslie Odom Jr.) is also in the midst of what the movie depicts as a transformation. The singer is moving away from the soulful, catchy, but unchallenging likes of songs like “Cupid” toward the eyes-open, lyrical protest of “A Change Is Gonna Come” — a song that would get released, as a B side, only days after his death in December 1964. (In retrospect, it feels painfully appropriate, given the collision of circumstances imagined by King’s movie, that Spike Lee’s canonical Malcolm X uses Cooke’s posthumous masterpiece — a plea disguised as an anthem — to reel its icon in toward his own imminent death at the climax of that film.) This is a deliberately conspicuous affair, heavy and portentous with a sense of fate.

One Night in Miami is intriguing and engaging on these terms, a stirring and effective mash-up of history real and imagined, with facts carefully reoriented to add heft and imagination to what cannot be known. What’s true is that these men got together at the Hampton Hotel, in Miami, to celebrate Clay’s victory. The ice cream, too, is a real touch; so is the fact that Cooke’s late turn toward more overtly political art was provoked, in part, by the King of Soul hearing Bob Dylan’s “Blowin’ in the Wind.”

But the movie wields these facts as forays into a fictionalized account of what happened behind the doors of that hotel room. Writer Kemp Powers, adapting his own 2013 play of the same name, takes what we know about these men — their political attitudes (and, importantly, differences), their camaraderie, their shared sense of responsibility for being prominent black voices in a violent and shifting era — and goes out of his way to both imagine and detail all the conflicts that might naturally have arisen from these pressures. (With the release of last year’s Soul, Powers became the first black director to co-helm a Pixar movie; between that film and this one, he would seem to be one of this Oscar season’s unheralded men of the moment.) It is, for a movie adapted from a one-room play, an admirably dynamic and talkative rendition of a pure, contingent ideological battle.

There’s the Nation of Islam in itself, plus Malcolm’s controversial pronouncements in public and the automatic rifts that these alone can strike among a roomful of otherwise friendly black men at this particular moment in history. There’s the threat that Malcolm, wonderfully shaded and enlivened by Ben-Adir, seems to feel on every side of him — everywhere but in this room. There’s the problem of black capital and financial independence from the white mainstream, the latter of which, some of these men feel, is a necessary evil worth confronting and using to achieve the former. There’s the inevitable debate over each man’s prominent public position and what it means for what they can do to serve black America, broadly speaking. And that debate naturally gets personal: a dredging-up of each man’s flaws and failures, all the things each has done, or has yet to do, or doesn’t know how to do.

All of which sails — some corny choices and low-energy detours aside — on the confidence of King’s insightful and undistracting direction, a real accomplishment for this actor in her feature debut as a director. She knows when and how to fold moments of subtle style and energy into the film that get the mind and emotions going. An account of a Cooke performance in Boston — a parable, really, of the singer’s power to effect the black masses toward action — hinges on a great choice in sound design that heightens the account with moving grandeur.

Each man, meanwhile, gets his moments of singularity, even isolation, within the frame, moments where, mid-debate, one of them will see himself in the bathroom mirror and, lingering there, seem to implode with questions. A keen sense of public performance versus private freedom provides an undercurrent to everything at stake right from the film’s opening scene, and plays out effectively, if also in the ways one might expect. What’s more surprising are the ways that those public selves — the factual and historical framework on which the entire movie rests — seem to incur on the ways these intimate friends see and understand each other. It’s more than merely pointing out each man’s ironic contradictions; when they verbally tussle, moving from hotel room to hotel roof to parking lot to, finally, a local bar, they are arguing as much with one another as they are with our broader ideas of who they are. Even as they know one another in ways that none of us possibly could, their mutual impressions are pressingly, damagingly colored by public impressions.

There’s almost so much happening in this room that the movie, for all the skill of its writing and the care of its direction, can’t wholly satisfy or meaningfully engage in every nugget of political and personal conflict it brings to the forefront. When Jim Brown points out that Malcolm X, like certain other black political intellectuals before him, has benefited from being lighter-skinned, you’d be right to wish the movie went there. Yet the sense of shorthand here and elsewhere makes it feel like it’s part of an ongoing conversation, not something restricted to the fabulation of this fictionalized account. It’s something that feels broader and already spoken for, as if this is hardly the first time someone has floated this idea to Malcolm, whose defensiveness smartly suggests that he has some self-reckoning to do.

It’s the actors who, in many ways, make the movie. Hodge’s Jim Brown is spectacularly funny, in just the right ways and at just the right moments; he’s also just as indomitable and fearsome as you’d want him to be. Goree’s Cassius Clay does the brilliant work of reminding us just how young that man was in this moment, with his conversion to Islam feeling like an essential pivot in his political coming-of-age. Odom is great, too — no surprise there. His Cooke is sensitive and proud, charismatic, conflicted, easily bruised. As is, surprisingly, Ben-Adir’s rendition of Malcolm X, who, in contrast to the headstrong and overpowering presence immortalized by Denzel Washington in Lee’s groundbreaking film, comes off here as wary, desperate, scared, at the end of his rope — and all the more memorable and human for it.

His is the performance on which the question of public performance rests, because his is the reputation for controversy that most powerfully precedes him. One Night in Miami is an act of imagination. It does not reinvent the wheel. It polishes and clarifies the spokes — all while moving and entertaining us in the process.