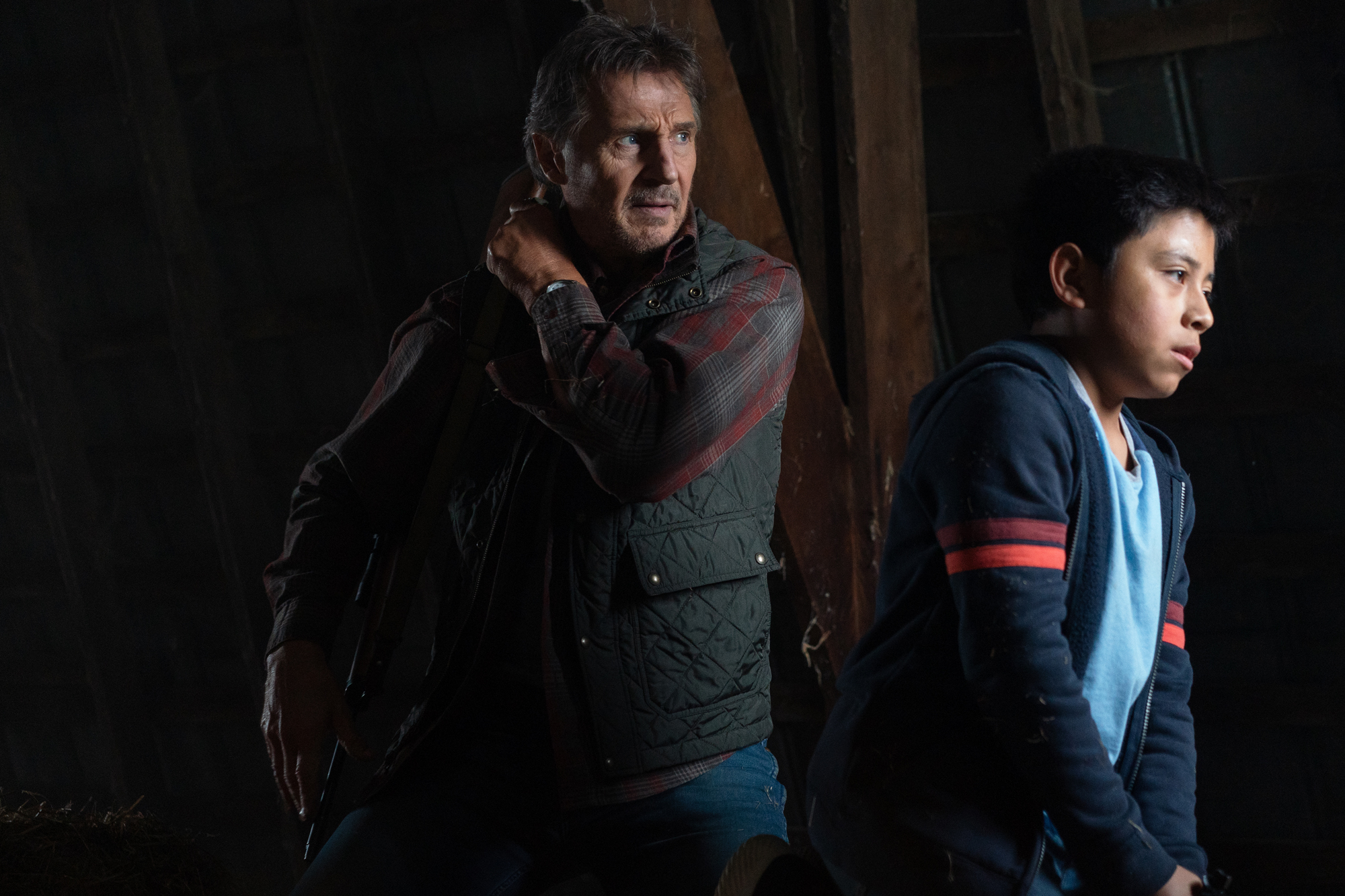 In The Marksman, Liam Neeson plays Jim Hanson, a former Marine living in Naco, Arizona, within spitting distance of a border fence. This means that he can phone local authorities when he sees a new crew of “I.A.’s” making their way into the country, on the one hand, and offer water to the stragglers left behind to fend for themselves after that merciless crossing, on the other. So: unquestionably law-abiding, but also, in excess of what the law requires, notably humane. The first thing we see him do is shoot a coyote — the animal, that is, not one of those doomed and frequently dangerous smugglers of desperate migrants across the border. But the double meaning is clear.

You suspect that Jim would probably prefer above all to be left alone on his ranch to sulk with his dog, Jackson. His daughter, Sarah (Katheryn Winnick), works for border patrol. Good for her. His wife, meanwhile, has recently passed away after a long and brutal illness. And now, more trouble: A young boy named Miguel (Jacob Perez) runs out in front of Jim’s dusty blue Ford pickup, his mother not far behind him. There’s a crew of cartel assassins on their tail. And, well, the inevitable happens. A shoot-out, an unexpected killing: Hanson is Miguel’s de facto guardian, now, with a mother’s dying wish — get the boy to family in Chicago — on his conscience. And a bag of someone else’s money in his front seat.

How Badass Is Liam Neeson?

Grateful Dead Albums: The Best of the Rest

The Marksman is a borderland action weepie, a Liam Neeson movie in a Clint Eastwood costume. But what every Eastwood movie lacks is the humor of an Irish actor whose accent remains defiantly, subtly Irish, no matter how hard he tries (if indeed he does try). Eastwood movies also tend to be “better”: sharper, weirder, more fraught, if not always less predictable. Whereas Neeson — with the likes of the Taken franchise under his belt — is the 21st century’s granddaddy of American Dad Action. Mix the two and you get … something! Not a great movie, but courtesy of director Robert Lorenz, a lean, plausibly entertaining one with all the fixin’s and none of the extra flab of deep, incisive meaning. It’s a buddy movie, a cartel chase, a sentimental redemption story. It’s a comfort watch.

The star and the premise are the obvious attractions here, but you have to savor the little things in pulp like this. For example, there’s the ongoing cat-and-mouse dilemma that sustains the plot, with the vicious cartel killers, led by Maurico (Juan Pablo Raba, suitably dangerous, even fun to watch), taking no prisoners and offering near-nothing in the way of personal qualities beyond chewy villainy. But this is a movie whose real soul is in the image of Neeson with an American flag draped over his shoulder, the Arizona plains playing a parched but handsome backdrop to his life. Or in him telling a stooge from the bank about his wife’s ashes buried just yonder on his property — a way of getting a little sympathy for his late mortgage payments. (Her illness is what bankrupted him.) The movie is steeped in the man’s utter sense of compromise: his drinking problem, the fact that he’s losing his home despite having served his country. It coasts on our awareness of the Tough Choices to come, to say nothing of our sympathy for the circumstances that landed Hanson here.

The Marksman‘s damnation is its predictability; it’s saving grace is the smattering of small details that ward off self-seriousness. Miguel knows more English than Jim at first assumes (a light punchline) and is a sprightly, responsible whippersnapper who walks Jim’s dog when the man is too drunk. Obviously the movie has a stirring, infuriating political crisis at its heart — and it isn’t here to shout out against that crisis outright so much as make due. The Marksman’s politics are old-school cowboy politics: less compassionate conservatism than compassionate vigilantism. Lorenz’s direction is swift, capable, and to the point, and he sells us on this idea pretty effectively. “I already called the cavalry,” Jim says, at one point, to the cartel brutes. “So I suggest y’all just … turn around and adios.” (A good, cheesy line; the movie’s full of them.)

What starts off as a beleaguered portrait of a dead-end frontier hero soon reminds us that violence in the name of moral goodness trumps all. In the end, not even the cops can be trusted. The odds are stacked so heavily against the hero that the ending is damned to be bittersweet. How could it be anything but? Men like Jim are a dying species, the movie seems to say. Then it points to Jim himself and says: Case in point.