China has confirmed its bounce-back from the coronavirus crisis as official figures revealed its economy grew by 2.3% last year.

The expansion was the weakest since 1976 after the pandemic sent GDP into reverse at the start of 2020.

But the country where COVID-19 was first identified will be the only major global economy to have avoided contracting during a year defined by the catastrophic impact of the outbreak.

Economists expect China’s expansion to pick up further pace this year with growth of more than 8%.

Figures from the country’s national bureau of statistics showed GDP shrank by 9.7% in the first quarter before bouncing back to 11.6% in the April-June period then growing by 3% and 2.6% in the third and fourth quarters.

Retail sales growth slowed towards the end of the year – falling short of analysts’ expectations and leaving them 3.9% lower for 2020 as a whole, in the first decline since 1968.

But exports have picked up pace as manufacturers stepped up production to supply goods to many countries crippled by the pandemic.

Strict restrictions imposed in China helped it to contain the outbreak much more quickly than other countries.

The world’s second biggest economy – also navigating through a trade war with the US – has been helped too by central bank stimulus measures. 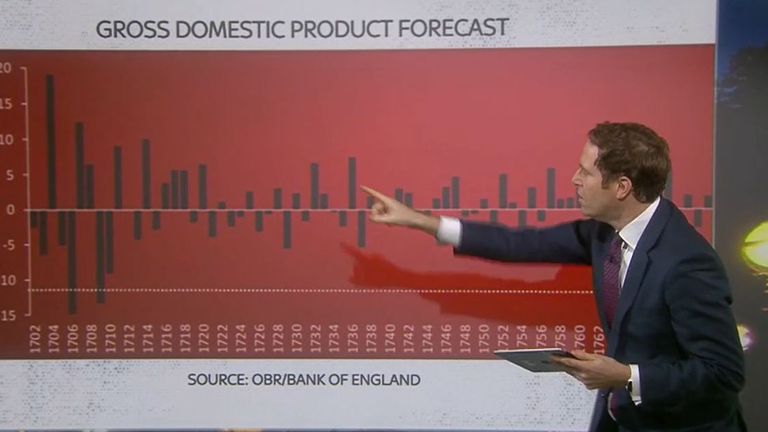 The state of the UK’s pandemic-hit economy

Some analysts cautioned that a recent rebound in COVID-19 cases in the northeast of the country could impact activity and consumption in the run-up to next month’s lunar new year holidays.

China’s 2.3% growth for the year compares with projections that other major economies will all report declines for 2020, with the UK expected to have experienced its worst collapse for three centuries.