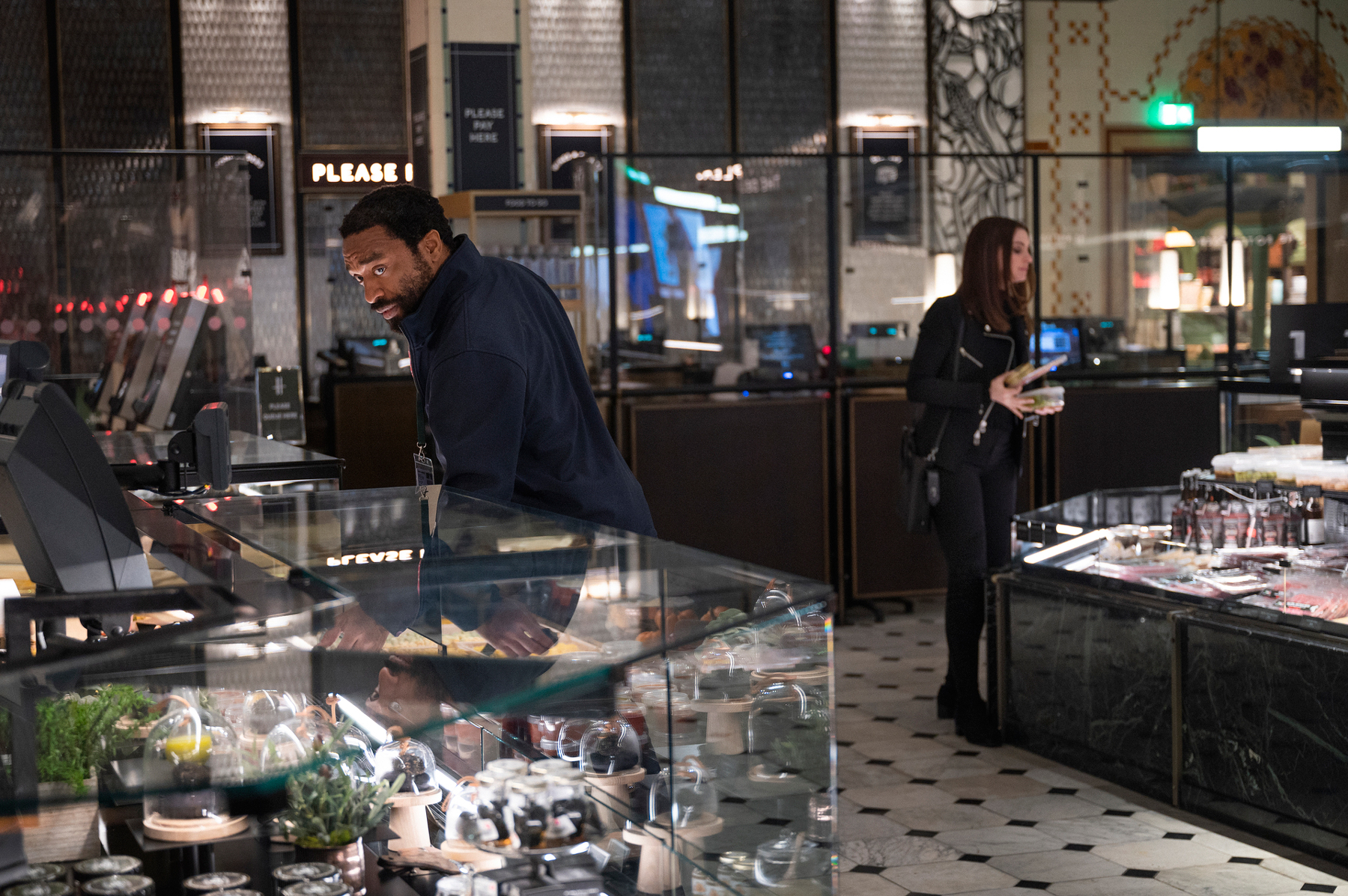 The first thing to know about Locked Down, director Doug Liman’s semi-surprise rom-com heist movie hitting HBO Max today, is that it’s a period piece. No sooner has the Warners logo slid across your screen to the sound of metropolitan life — bustling streets, honking horns, chattering voices — then we open on a people-less London intersection, all silence and emptiness. We’re in the initial weeks of the pandemic, when the city’s residents sheltered in place, the evenings were filled with the banging of pots and pans, and the prime minister had just caught the coronovirus (for the first time). Claustrophobia reigns. Toilet paper has become the equivalent of cigarettes in prison. Zoom is the primary mode of all communication, whether it’s catching up with family members across the Atlantic or telling your team at work that they’ve all just been fired. The center is still holding, but only barely.

Decades from now, historians may look to this make-a-film-during-a-global-catastrophe-challenge project and study it for markers regarding 2020’s spring of our discontent. That may be Locked Down‘s real lasting value — it works far better as a partial document of life under lockdown than as a genre mash-up. Working from a script by Steve Knight, a screenwriter with a firm grasp of mining isolation for drama (the one-man show Locke) and an even firmer grasp of god-level ridiculousness (the one hot mess Serenity), Liman sets up his story the first time as social tragedy, the second time as bedroom farce. Once upon a time, Paxton (Chiwetel Ejiofor) nearly beat a man to death in a biker bar in Watford. His status as an ex-con has hindered his employment opportunities, which means he’s had to make do with driving a van … and now, because of the pandemic, he’s been furloughed. His beloved motorcycle has been sold off. He has no friends, nowhere to go. His future looks bleak.

No ‘Tomorrow’: Doug Liman on the Blockbuster That Almost Broke Him

The kicker, however, is the fact that Paxton had just broken up with his longtime sweetheart, Linda (Anne Hathaway), when the U.K. went into mandatory lockdown, which means that they’re imprisoned in a cramped flat together for the time being. She’s not having the best of moments, either. Her boss (Ben Stiller, in prime douchier-than-thou form) has forced Linda to lay off her entire London team of marketing staff, a decision which may have preceded the pandemic. She’s smoking again. And while she and her ex clearly still have feelings for each other, they both know they need to move on. “I wanted wild,” she admits, harking back to the relationship’s early days of motorcycle gangs and outlaw-couple coolness. “Then I didn’t want wild anymore.” If they can just get through the next two weeks without killing each other — or worse, falling back in love — they may each survive this thing in one piece.

What we’ve got here is a muted, modern spin on the classic “marriage comedy,” a screwball designed to casually resemble an Eephus pitch. There’s a looseness to all of the back-and-forth despite the bitter, occasionally overwritten banter, with everything held together simply by the chemistry between the two stars. Ejiofor leans in to Paxton’s rough edges: He’s self-pitying, forever moaning about bad luck and fate’s curses, needy and constantly needling his former significant other. But given the charisma the British actor brings to virtually every part he plays, you see why Linda can’t let go of him as much as why they shouldn’t be together. Those who find Hathaway annoying by default won’t necessarily be won over — there are Hathaway-isms galore in her portrayal of a stressed-out executive stuck in an existential crisis. She pairs extremely well with her counterpart, however, and it’s their sweet-and-sour rhythms that keep things moving. No one’s talking Cary Grant and Irene Dunne here, but someone needs to get them a sturdier movie together stat.

Locked Down bumps and shambles along for a while like this, until a confluence of plot conveniences finally point to where this torn-from-the-headlines bottle episode writ large is headed. It seems that Paxton’s former boss — God bless you, Sir Ben Kingsley, for the Big Don-Logan Energy you bring to this tiny part — is in need of a driver for some special gigs. A number of retail stores are transporting their expensive wares to safer storage areas during this time of crisis (“The fabric of our society is torn, you see that … fears of rioting, looting, pestilence … apocalyptic words!”). Paxton may have a criminal record, so he has to do it off-book and under an appointed pseudonym, a running joke which we won’t spoil. The biggest job? Moving high-end merchandise out of Harrods to a space at Heathrow Airport, including the $3 million Harris Diamond.

Coincidentally, Linda used to work at Harrods. And because of her familiarity, she’s been asked to supervise this particular jewel’s transfer, as it’s been purchased by some foreign human rights violator or other through her company. It would be immoral to broker this deal, she thinks. It would be less immoral if they just gave him a fake, have Paxton sell the real one to a fence, and pocket the loot. Pandemics are temporary. Diamonds are forever, if we recall correctly, and really, what better way to simultaneously stick it to the man and repair your relationship than to plan a good old-fashioned caper?

We’re now squarely in heist-film territory, and with a famous backdrop to boot — Locked Down‘s other big distinction is that it’s the first movie to film inside the department store, something that wouldn’t have been possible in a normal world. (Indeed, the sight of Ejiofor and Hathaway idly strolling through the nearly empty venue, picking out food for a precrime picnic, is the single most arresting reminder that this was filmed under extraordinary circumstances.) Lest you think you’ve wandered into Covid’s 11, however, this is where the movie starts to genuinely deflate, and you begin to wonder what someone like Steven Soderbergh might have done with this material and the production’s singular set of obstacles. Yes, Liman’s demonstrating a puckish, liberated energy he hasn’t exhibited since Go. No, it can’t keep reviving what feels like a flatlining Rififi riff, or the many moments in Knight’s script where coincidence, cliché, and seize-the-day maxims collide. Nor does it keep you from wondering what we’d really be left with if you were to take away the corona-sploitation elements.

The answer is: a screen duo who deserves better, a handful of dynamic moments (the energy exhibited in a brief interlude of Hathaway dancing to Adam and the Ants’ “Stand and Deliver” could power a small town), a stoned hedgehog, and celebrity Zoom cameos that range from cute to make-it-stop cringeworthy. Locked Down is, at its essence, an attempt to refashion limitations into creative inspirations — a stab at making pulpy, spiked lemonade out of society-crippling pandemic lemons. It’s a lark at the mercy of its own novelty factor, and one that, every so often, makes a case for its existence. And like the London cross streets that open the film, it’s something almost comfortingly familiar until you can’t help but notice how weirdly empty it is.

Florida School District Puts Warnings on 100 Books, including EVERYWHERE BABIES
OnlyFans Model Courtney Clenney Was ‘Aggressor’ Who Murdered her Boyfriend, Prosecutor Says
Internet providers urged to offer ‘social tariffs’ to cut bills for lower-income households
Hack A Bitch: Bella Poarch Claims Trolls Are to Blame for Anti-Cardi B Tweets
It’s hot outside, but for Pasadena’s Summer Skate Camp, it’s back to the ice