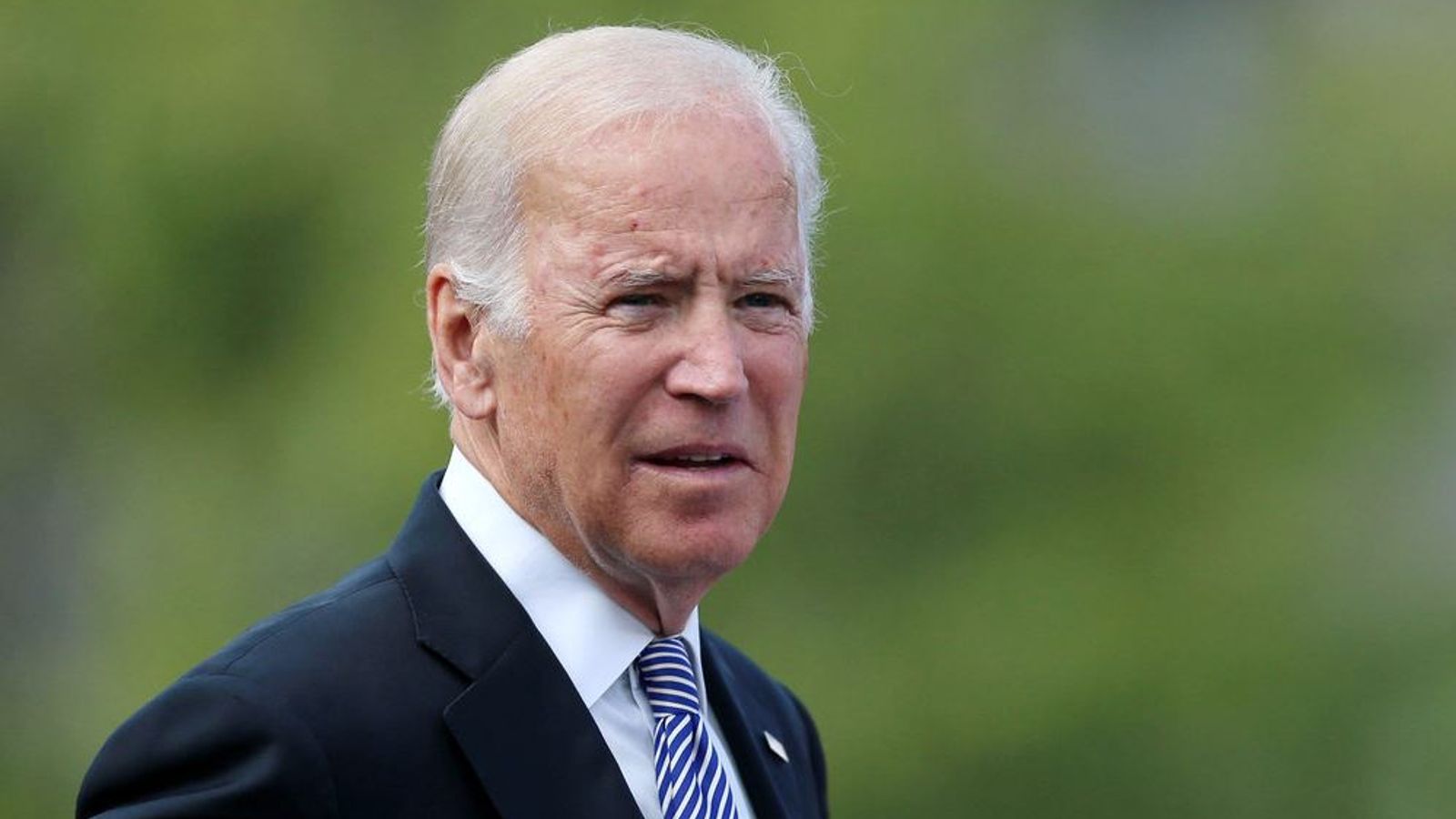 The first and most immediate priority will be to get to grips with the COVID-19 pandemic and the damage it has inflicted on the US economy.

The rollout of vaccines itself is way behind where those who run US health policy had hoped it would be and, with the number of cases having topped 23 million, the pandemic is still raging. Mr Biden‘s challenge here will be to try to control and bring down the spread of the virus without doing further harm to the economy.

Along with this comes the second economic challenge – chiefly, how to put right the damage that has already been done to the US economy. The latest figures spell this out.

Biden inauguration: Watch and follow events on Sky News from 1pm on Wednesday, with the ceremony starting at 4pm

Some 140,000 Americans lost their jobs in December – the first month since April last year that more jobs were lost than created – and, of the 22.2 million jobs that were lost in March and April last year as the US went into lockdown, only half have to date been restored.

One knock-on from that has been that the US consumer, a reliable stalwart on whom the global economy has traditionally been able to rely, has gone into hibernation. December was the third month in a row that US retail sales fell while the November retail sales figures, which take in the post-Thanksgiving Black Friday promotional events and the start of the Christmas shopping season, were also revised lower.

So Mr Biden has to find a way of stimulating growth and giving employers the confidence they need to start hiring people again.

To that end, the president-elect last week unveiled a $1.9trn spending package, all of which would be funded by extra borrowing. The package includes a $20bn investment in a national vaccination programme and its central proposal involves sending cheques of $1,400 to individual Americans on top of the $600 payments that were agreed by US Congress last month.

Mr Biden also wants to raise the minimum wage to $15 an hour and also proposes raising emergency jobless benefits to $400 per week. 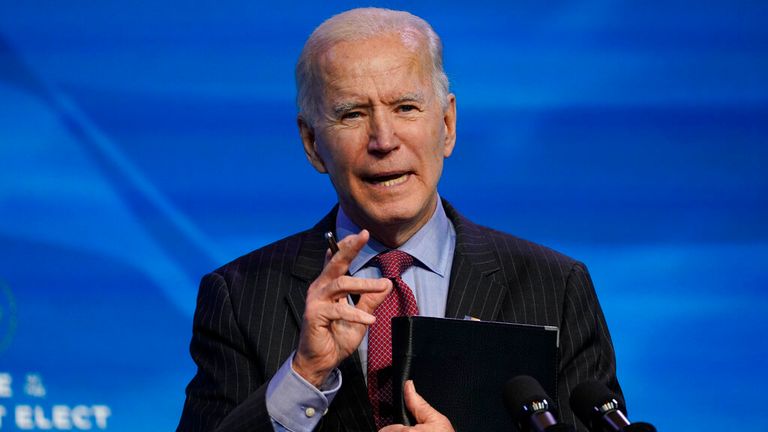 Yet getting these measures through US Congress, even with the majority the Democrats now enjoy in Senate, will be difficult. Moderate Democrats share the concerns most Republicans have about government borrowing and not all of Mr Biden’s spending proposals can be passed with a simple Senate majority.

A lot of measures require 60 votes to get through Senate, which means that Mr Biden will have to get some Republicans on board, something that seems unlikely with contentious measures such as the $350bn in emergency funding the president-elect proposes giving state and local governments.

Mr Biden is a past master at reaching across the Senate floor and cutting deals with the Republicans, but getting some of these measures through will test even him.

As he seeks to revive growth, Mr Biden will receive support from the US Federal Reserve, America’s central bank. The Fed, with which Donald Trump frequently clashed, can be relied on to keep US monetary very accommodative to support growth.

But this, too, will create challenges of its own. The Fed’s asset purchase scheme, quantitative easing in the jargon, has pushed up the price of financial assets and helped drive the US stock market to record levels. This has in turn helped drive up wealth inequality.

So the biggest short-term economic challenge is navigating the US economy through COVID-19 and repairing the damage done by the pandemic.

Longer term, there are other challenges, among the most pressing of which is to upgrade America’s infrastructure.

Anyone who has visited the US in recent years will not have failed to note the woeful state of the country’s roads, bridges and airports. This in theory ought to be a huge opportunity for the government, not least because of the job creation potential it carries, but again will require vast spending increases that will need to be funded.

Equipping the existing the US workforce with the skills required to make the economy more competitive will also be a big challenge.

The US has a big skills shortage in fields such as healthcare and professional services, where there are more vacancies than there are Americans able to fill them.

Closely linked to this is immigration. Donald Trump sought to limit both legal and illegal immigration, in the face of opposition from many of the country’s business leaders, who would like to see changes in the rules enabling the US to modernise its immigration policy in line with the needs of the economy. Business leaders, who were among those most vocal in their response to the Black Lives Matter protests last year, will also be receptive to efforts made to reduce racial inequalities in the economy – something on which the US Chamber of Commerce, the country’s leading business organisation, has been increasingly vocal. That is not only a societal challenge, it is also an economic one, since racial inequalities undoubtedly result in wasted potential.

Then there are also technological challenges. Mr Biden is widely expected to bring the US back into the Paris agreement on climate change and, with that, will come the need to green the US economy. Facilitating more investment in green technology will represent a challenge but it is also a huge opportunity.

Related to that is making America more competitive. For all his divisiveness, Mr Trump had some major policy successes, the biggest of which were the tax reforms and cuts he made early in his presidency.

It was the biggest shake-up in the US tax system in 30 years and went a long way to increase America’s attractiveness as an investment destination. Mr Biden would be wise not to unwind much of that. The flip side is that Mr Trump also revelled in beginning trade wars and raising tariffs against countries, chiefly China, that he did not think were trading fairly with the US.

The latest trade surplus that China has reported shows how little impact these tariffs have had other than to raise prices for US businesses and consumers. Mr Biden will be tempted to move back in a more globalist direction but this will also prove challenging – not least because the US still needs to be taking a stand on the theft of its intellectual property rights by China.

Another entity against which Mr Biden may feel he needs to take a stand, as hinted during his election campaign, is big tech. Trying to rein in big tech’s powers is something in which the new president may enjoy bipartisan support but, even here, he will have to be careful for fear of damaging a sector in which the US is a global powerhouse. 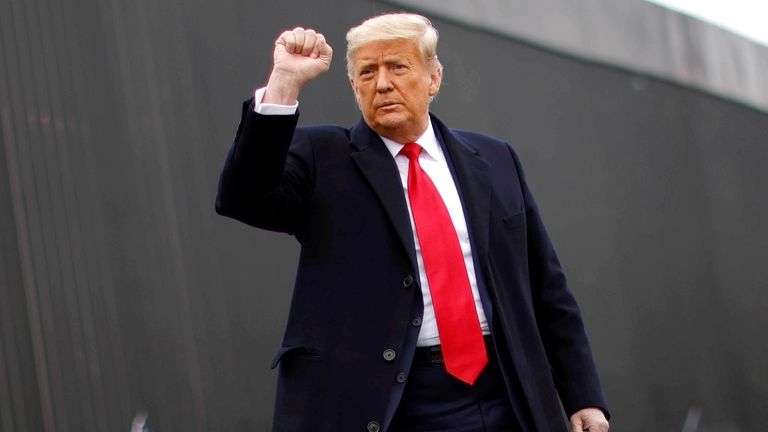 Trump warns Biden: Be careful what you wish for

One challenge Mr Biden is likely to shirk, however, is US government borrowing.

As with other advanced economies, including the UK, government borrowing has ballooned during the pandemic. Under Mr Trump, the national debt shot up by nearly $7trn to $27trn, of which $22trn is publicly held.

America’s debt to GDP ratio now stands at its highest level since the early 1950s. It used to be the case that the Republicans were seen as the party of fiscal responsibility, cutting public spending and putting up taxes, while the Democrats were seen as profligate and free-spending.

That has not been the case for a very long time. During the last 50 years, the only US president to have successfully balanced the budget is Bill Clinton (although some credit the tax increases of George HW Bush for this), with George W Bush, Barack Obama and Mr Trump all presiding over big deficits. Mr Biden, to judge from his fiscal stimulus package, is likely to do the same.

That may not seem like a big deal when interest rates are close to zero. But combine it with the fact that, thanks to QE, three-quarters of the dollars now in circulation have been created in the last 10 years and the overall effect has been to undermine the greenback’s status as the world’s reserve currency.

That status underpins America’s global hegemony and there are plenty of other countries, including Russia, China and Iran, who would be delighted were it to be lost.

It may not seem especially obvious – but preserving the dollar’s reserve status may yet create another challenge to the incoming president.