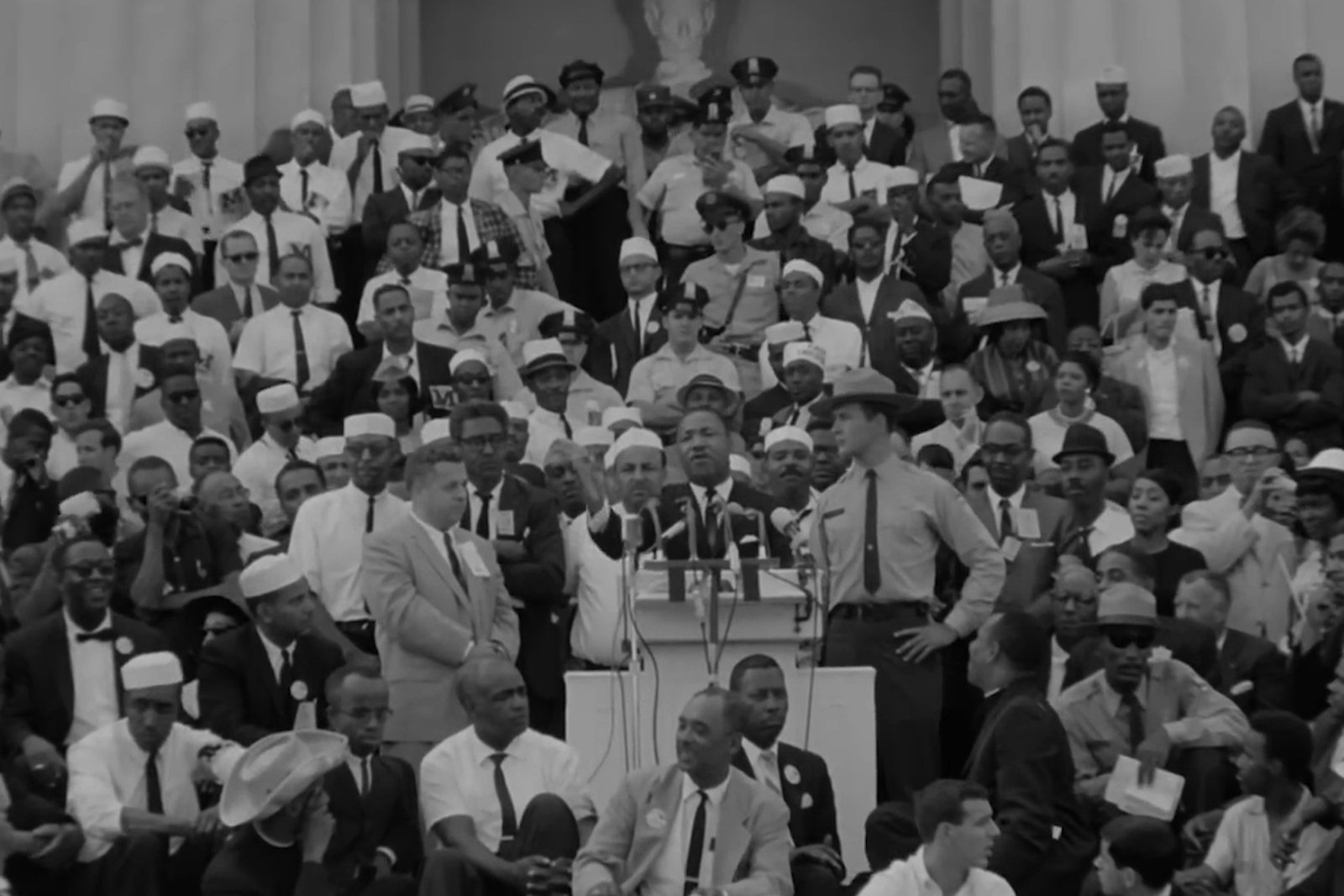 The title of Sam Pollard’s MLK/FBI should be taken literally. This is a two-pronged investigation into a conspicuously fraught and, for the FBI, embarrassing moment in the American political establishment’s too-recent past. The documentary is primarily a study of the public and private selves of the men it names up top: Martin Luther King Jr., the enduring image of black Americans’ struggle for civil rights in the 1950s and beyond, and King contemporary J. Edgar Hoover, head of the FBI and — notoriously, with little real discretion — one of King’s most ardent, powerful, and tireless public detractors.

The FBI under Hoover had plenty of enemies, of course. King was hardly alone — and he was certainly far from being the only black activist, specifically, to comprise the FBI’s auspicious roster of suspected threats to democracy and the American social order. This is a point that Pollard’s documentary, which focuses on the last 10 years of King’s life — the height of his public activism — smartly takes care to detail, broadening outward at precisely the moment it begins to feel too narrow. Yet, so many of these other figures and their ties to the ensuing battles waged by Hoover’s office — the war on Communism, the attempts to thwart antiwar sentiment in the Vietnam era, the villainization of organizers working on behalf of America’s working poor — nevertheless tend to intersect, in telling and tragic ways, with King.

Before the Media Lionized Martin Luther King Jr., They Denounced Him

So much so, in fact, that by the end of MLK/FBI, a viewer might be convinced that King’s story, with its many facets, its many secrets, is not only an essential narrative line cutting through the broad, vacillating political sentiments of the era, but also, importantly, a key to understanding the power and function of the FBI itself — and through it, Hoover, and through him, the political structures that made his efforts possible. That’s the basic story of this movie, which opens with the Montgomery bus boycott and its ensuing political victories — a moment during which King, while on the FBI’s radar, was not yet the object of its enduring ire — and then gradually deepens, in line with the FBI’s interest, when it’s discovered that King had close ties to the lawyer and onetime Communist progressive Stanley Levison, to whom King was introduced, in 1956, by Bayard Rustin.

From there, we’re off to the races, strung along, in large part, by the pivots in the FBI’s suspicions of King. First there’s Levison and the fear — felt as high up as the Kennedy White House — that black activists are performing the will of the American Communists (who were, at that point, public enemy number one). Then comes the interest in King himself, who stokes Hoover’s fury by continuing to communicate with Levison despite warnings (from JFK and Robert Kennedy, both, at the urging of Hoover) to sever these ties lest they reflect on the White House. Soon come the wiretaps and bugs, the gathering of private intel by the FBI — all of it signed off on by Robert Kennedy, the attorney general. And from there comes the drop of the other shoe: the accidental discovery, by way of a bug, that King was having illicit extramarital affairs. This, Pollard’s film argues, is when the FBI’s focus shifts, and the axis of its political outrage becomes explicitly and inarguably moral, a throwback to the long tradition of dehumanizing black sexuality, rendering it dangerous and animalistic, in ways that precede but are most purely encapsulated by D.W. Griffith’s The Birth of a Nation. King’s sex life was not relevant to his suspected communism or his fight for racial equality. But what these facets shared, the case they allowed the FBI to start making, was for King to be seen as an aberration: a hypocrite, a liar, a threat.

Pollard details these swerves with what appear, at first, to be tangents, but which prove themselves to be the most damning and effective form of supporting evidence. In noting the bugs and wiretaps used to surveil King, for example, Pollard gives us a glimpse of the history of those methods: who allowed them, how they worked, who was bugged — and when those methods soon gave way to Cointelpro’s active tactics of infiltration and disruption. He illustrates Hoover’s idea of the “social order” by giving us a lesson on the G-Man as public image: white, built, conservative, clean-cut. This is Hoover’s America: impeccable, unimpeachable, fit to be played by movie stars (which they were). Walk a Crooked Mile, The FBI Story (with a Hoover cameo), Big Jim McClain: These are the films that Pollard, who otherwise narrates this story entirely through archival footage and photographs, uses to tell the FBI’s story, which is really a story about our public perception of the FBI. We’ve forgotten, as a culture, that in King’s moment, he was far less popular among the public at large than Hoover. When King won the Nobel Prize, Hoover, by then aware of the man’s private indiscretions, pronounced him “the world’s most notorious liar.” The public — that is, the white public — believed him.

There’s an eerie way in which these men, who met face-to-face only once, emerge by film’s end as an inseparable American pair, each impossible to fully account for without rigorous acknowledgment of the other. King’s private struggles are, in so many ways, tied to the pressures applied by Hoover, particularly those applied by proxy, by way of the sympathetic Kennedy clan and the collaborative, if also mistrustful, Lyndon B. Johnson. Hoover’s interest in King, meanwhile, comes off as a single-minded obsession — and as a tool. When King and LBJ fall out of favor, Hoover, who had himself fallen somewhat out of favor with the presidential administration, wields it as a way back into the White House’s good graces. So it goes. The choices that King and Hoover make relative to the public pressures they applied to one another only serve, in Pollard’s recounting of this bitter history, to twine these men together ever so tightly.

This is all part of what gives Pollard’s film its deafening urgency, its tingling aura of imminent danger. Not the imminence of death, per se — we all already know that King was assassinated. And a great many of us are also already well aware of the FBI’s open antagonism toward the man, an indiscreet fury that, inadvertently, guaranteed King’s eventual martyrdom by so adamantly committing to being on the wrong side of history. These are subjects that Pollard necessarily addresses. But the thrill of MLK/FBI is in the way that, knowing all of this, the film catapults through history on a wave of nimble, swift calls and responses, a persuasive back-and-forth between the aims and images of these men that has the tight propulsiveness of a procedural thriller and the rhetorical care of tirelessly honed polemic.

All of which is worthy of the resourceful, persuasive, fast-moving and smartly organized treatment Pollard has provided in his documentary. But Pollard — who’s made a wide range of films on subjects as related but distinct as the playwright August Wilson, post-Emancipation enslavement (after Douglas Blackmon’s Slavery by Another Name), and the 2009 ACORN scandal — is too smart to overly situate MLK/FBI in the well-trod, if nevertheless still shocking, past. The film’s overarching question is, in fact, not only about the past, but about the future — and about the imminent archive looming over everything we see here.

In 1977, a title card tells us, the FBI was ordered to turn its surveillance evidence of King over to the National Archives, where they remain sealed to this day. Not for much longer. In February 2027, the seal can be broken. Then what? MLK/FBI is, in so many ways, a film about image management, a study of the gaps between the private obsessions and indiscretions of great men and the public perceptions of these men. Cannily, the “talking heads” used throughout — including historians (among them David Garrow, recent winner of a Pulitzer for a book on King, and Beverly Gage, an expert on the FBI); close King associates Andrew Young and Clarence Jones, whose eerie accounts of the era suggest that King was deeply affected by the threat of his sex life going public, and also that he did not heed their early warnings; and even a former FBI agent from the era, who, notably, decries the release of the tapes.

These talking heads do a lot of talking, a lot of narrating. But Pollard wisely avoids showing their actual faces until the end. He steeps us, instead, in the visual archive. And the rhythmic flow of his archival tour of the era rhymes with, bolsters, even questions, the experts’ narration. The effect is sometimes uncanny. We are told the story of Coretta Scott King receiving a tape on which “someone” (her words) can be heard in a compromising situation, and the accompanying suggestion that King kill himself. This is startling enough as historical fact. But Pollard sweeps the rug even further from under our feet with a clip of Coretta Scott King speaking about her husband, telling her audience that she knows him, understands him, better than anyone else. The effect cannot help but encourage us to see behind the words. We know what she must now know. Just as we know, in an earlier clip from a New York talk show, that a joke about whether King has enjoyed his time in the city is really a statement, not a question: We’ve heard what you’ve been up to.

Pollard makes you think alongside these images. The narrative framework his experts provide mingles with the pictures onscreen in ways that surpass the basic facts of the story and give evidence of a filmmaker who’s working, specifically, to get us to see behind those images — behind public image, generally. The question about the future release of the tapes only makes the alchemy of these associations more troubling and robust. What would we gain from access to the FBI’s materials — materials which, it simply cannot be understated or avoided, were gathered with a minimum of integrity or care for the privacy of this admittedly public figure? This, it seems to me, is more urgent than what the release of the audio recordings will do to King’s reputation, which, again, is not new news; the FBI made sure to send excerpts to major newspapers and religious authorities at the time, and secrets this salacious can hardly be said to remain secret for so long. But what are we — the public at large, historians to come — going to do with what we find? It’s a question whose answers remain to be seen. The accomplishment of Pollard’s documentary is that it so thoroughly prepares us to ask it.