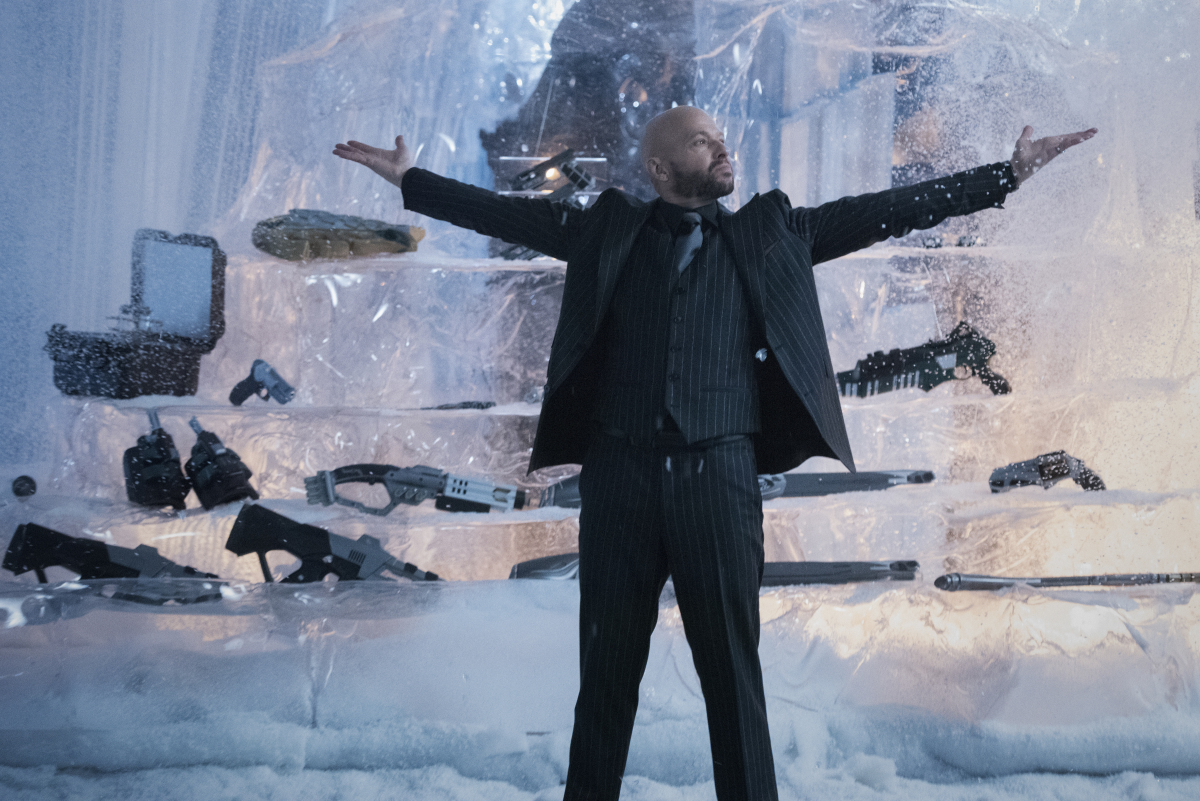 Supergirl is back for one last season, and they’re making it count. Kara and friends returned to finish out last season’s cliffhangers, including Brainy fighting for his life, Lex superpowering himself thanks to Leviathan, and Andrea Rojas’s life in shambles.

This episode packs just about every kind of punch, giving us the joy of seeing Kara and Lena reunited, the satisfaction of Lena clocking her brother, and the glee of an immortal Lex taking on a fully powered team of Superfriends, now with 100% more M’Gann, plus a suited and booted Alex Danvers. It’s impressive how much this hour of television manages to give so much of what we want, without any of the downsides of fan service. The writers knew, for example, that the anti-life weapon had to crap out on the Superfriends the first time they tried it, in order to make way for the glory of an epic final battle. And while Brainy and Nia are headed in the right direction, after half a season of cold-to-downright cruel behavior from the Coluan, there’s no easy way back to happiness and trust.

There’s no denying that Jon Cryer is a damn near perfect Lex Luther, and this episode leaned into that in a big way. Lex singing along to Queen while shooting off alien weaponry in time to the music in the Fortress of Solitude is a moment befitting a villain of his caliber, and a plan of this magnitude. After all, this scheme has been in motion since at least the Crisis on Infinite Earths, and the Leviathan part since well before. We love Lex because this is the kind of silly victorious celebration we would all do if we had finally achieved domination – or thought we had. Cryer is so good at playing every inch of Lex, from his most playful to his most ruthless, from his gentlemanly, almost nurturing side rescuing Eve Tessmacher to the coldness with which he pulled the rug out from under her.

Toward the end of last season, Kara talked about how she loved that Dreamer being able to take on any villain on her own meant that Supergirl could take a night off. Nia has taken the wheel before, but never for (potentially) as long as Supergirl’s trip to the phantom zone. It’s a sign of how much Nia has grown as a character and Nicole Maines as an actress that those pieces aren’t a concern at all. Supergirl has always excelled as a well-rounded ensemble of women, and Nia and Dreamer no longer feel like the interns holding down the fort. For however long Kara is away, National City is in good hands.

Of course, Nia will be supported just as Supergirl herself was in this episode. It’s hard to overstate the strength of this show’s ensemble, and indeed it can be hard to tell where the starting line-up ends and the bench begins, because the characters are all so beloved and the people who play them are so good. Jesse Rath, in particular, has been doing amazing work the last few seasons, and I can’t wait to see more. From multiple Brainiacs to removing his inhibitors to adopting a resigned affect when he joined Team Lex, Rath has been called upon to show extraordinary range for a character who supposedly has none. In this episode, after watching Brainy go to the brink of death, it was lovely to see Rath open the door a crack to let in some hope and a bit of another side of Brainy.

While your mileage may vary, there is, however, something inherently frustrating about the pattern of characters “leave before they leave,” to paraphrase Sheryl Sandberg of all people. We already know we’re losing the show Supergirl, something fans mourn even as we celebrate what it means for Melissa Benoist’s personal life. But as interesting as the prospect of the Phantom Zone mystery is and more screen time for other characters, the idea of Kara Zor-el being off-screen for anything more than an episode in what’s already her final season (making way for her more famous male cousin) has some serious sting to it.

Another question: what is Alex going to tell Kelly? Last season, Kelly gradually worked her way into the inner circle, eventually investigating on her own with William and then Lena. I think she’s ready for the truth and deserves it. Alex and Kelly are pretty serious, and I can’t be the only one who saw Alex Danvers holding a baby in her Obsidian Platinum lobby. Let’s not create another Lena debacle. After all, Kelly keeps her brother’s secret – and she was so good as Guardian in that alternate reality episode! Supergirl writers, do us a favor and bring back Kelly as Guardian (and perhaps even Guardian siblings?) before the end.

So much about last season between Kara and Lena would have made more sense if they had been the show’s romantic leads, and this episode reinforced that with their tentative and then gradually more effusive reunion. It was all furtive looks, secret rescue plans, “I know you in your heart,” refusing to say goodbye. While it’s lovely to have platonic love showcased as centrally important, with sisterly love as the other major relationship of the episode, it’s hard not to feel like if one of them were a guy, they would have made out by now.

As premiere’s do, this one leaves us full of questions, excitement, and most importantly, promise. Where in the Phantom Zone is Kara? What path will Andrea Rojas choose? What was Lena doing to her mother and Lex with Myriad? Is Cat Grant coming back? Will M’Gann and J’onn do a long-distance relationship? Whatever happens, it feels good to be back for one last go-round, and to know we’re in good hands.