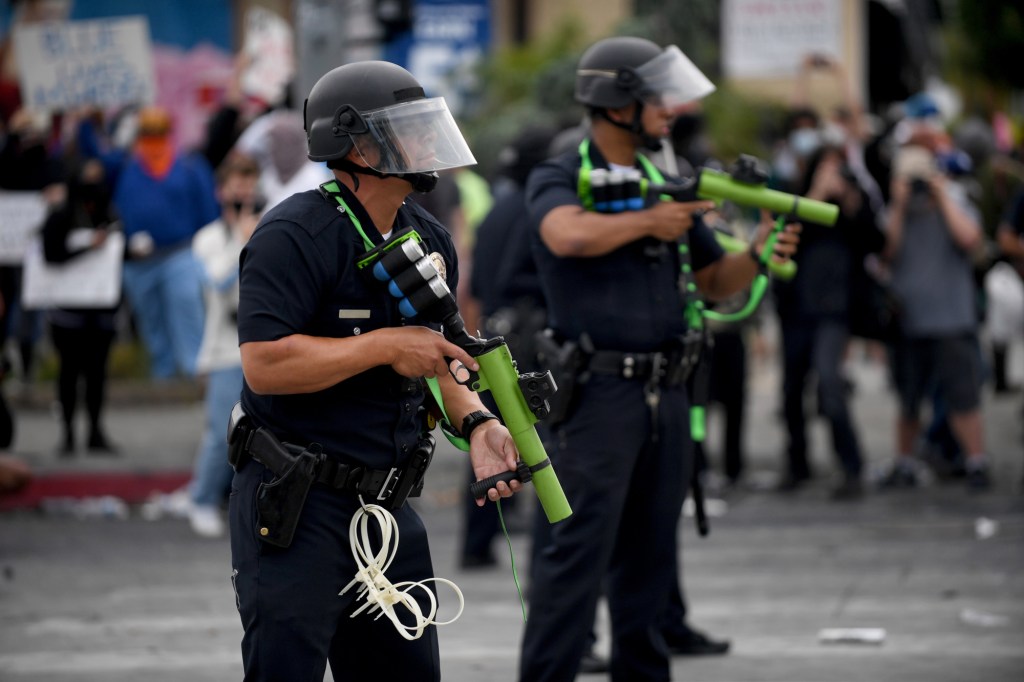 Los Angeles Police Department officials confirmed Thursday that they will once again allow officers to use less-lethal projectile launchers during protests after a federal judge revised an order that had placed restrictions on the use of the weapons.

Although last week’s temporary restraining order, issued by U.S. District Judge Consuelo B. Marshall, did not totally restrict the use of such less-lethal projectiles, Police Chief Michel Moore responded by banning his officers from firing the 37mm launchers at crowds.

The department, however, reversed course on Thursday, confirming it would reinstate use of the 37 millimeter launchers while following guidelines in Judge Marshall’s revised order that was handed down Wednesday.

“The LAPD appreciates the Court’s thorough review of all the facts and circumstances,” the department said in an emailed statement. “We are committed to exercise the needed restraint in the use of crowd control tactics while also maintaining the critical need to protect the community, as well as our police officers.”

The hard foam and rubber rounds used by LAPD officers have caused controversy and prompted lawsuits against the city after some activists, bystanders, and members of the media were badly injured by them during protests over the police killing of George Floyd, Breonna Taylor, and other high-profile police killings of brown and Black Americans.

Seeking to ban both 37-mm and 40-mm less-lethal weapons from being used on crowds, Black Lives Matter Los Angeles requested a temporary restraining order against the LAPD after a March 25 protest in Echo Park and a March 13 demonstration in Hollywood in which police and protesters clashed and a member of the press was struck by a projectile and knocked out, suffering a concussion, according to court documents.

Moore previously has said officers use less-lethal weapons to defend themselves so they don’t have to resort to firearms.

Under the guidelines of last week’s court order, LAPD officers are restricted from using the 40-mm and 37-mm projectile launchers in public unless they have proper training and are giving individuals a verbal warning to disperse and a reasonable opportunity to comply.

The order also said officers cannot shoot projectiles at a person’s head, neck, face, eyes, or spine. Officers are allowed to fire the less-lethal rounds if a person or officer is under attack.

The new court order kept these rules intact, adding that officers can fire 37-mm hard-foam projectiles at the ground, 5 to 10 feet in front of protesters after police have declared a gathering unlawful and issued a dispersal order.

Most of the changes in Wednesday’s order were made to more accurately reflect what LAPD’s current policies say about the use of less-lethal weapons, said Carol Sobel, one of the attorneys representing Black Lives Matter Los Angeles.

“All she did is say you have to adhere to your own policy,” Sobel said, questioning Chief Moore’s wholesale ban on 37-mm projectiles when the court order did not require it.

Though she is pleased with the protections the court’s order gives protesters, Sobel, who helped represent individuals injured by LAPD officers in protests under previous chiefs such as Daryl Gates in the 1990s, and later, William Bratton in the early 2000s, said she is concerned the rules may have a short lifespan.

“I see this pattern, which is that LAPD will abide by some of this for a short time, and then they will not abide by it,” she said.

Both 37-mm and 40-mm rounds were used by police responding to protests all over the country last year, including in Long Beach and in Portland, Oregon. LAPD officers fired the weapons thousands of times, according to a report for the City Council. The loud cracks and puffs of smoke emitted by both weapons were common features of footage broadcasted from the uprisings.

The less-lethal rounds are fired from bright-green or black weapons that look like simple tubes affixed to gun stocks. LAPD’s 40-mm launcher fires a single bright-blue cylindrical foam baton. The 37-mm fires a round that breaks up into smaller projectiles. Both can be fired every few seconds.

Lawsuits against LAPD accuse officers of firing wildly at crowds with both less-lethal weapons, hitting activists and bystanders alike.

In lawsuits against the city, Sobel said she is helping represent three men who were struck in the groin by police projectiles while standing still and away from crowds. One man says he was hit in the groin, rupturing a testicle, with a round last June.