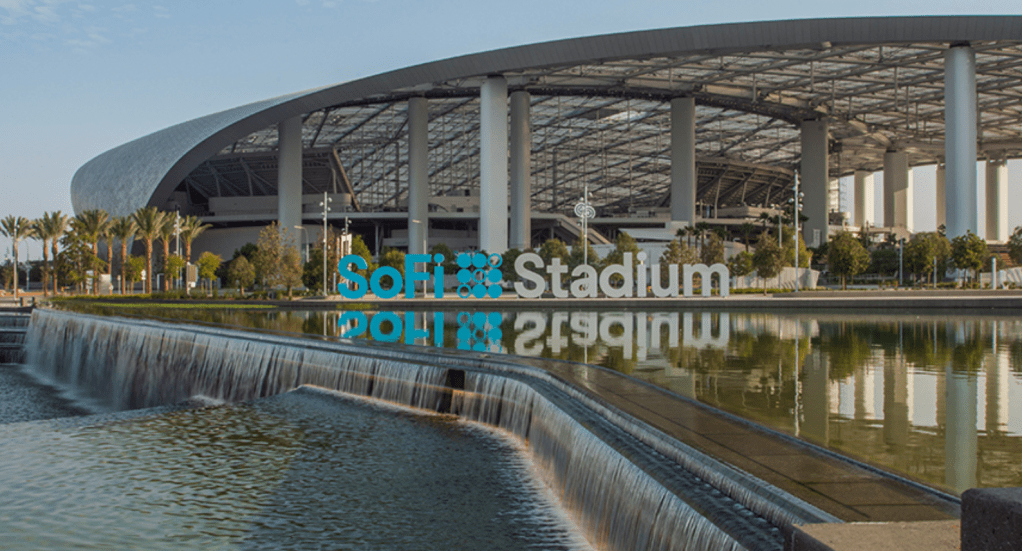 “I’ve never been in a space station before,” said David Letterman onstage last Sunday as he looked around the gleaming cavern of SoFi Stadium in Los Angeles.

Letterman was there to introduce Foo Fighters who — along with Jennifer Lopez, H.E.R., Eddie Vedder, Selena Gomez, Prince Harry and J Balvin — were a part of Vax Live, a worldwide effort to boost Covid inoculation across the globe that will be telecast this weekend. Even with all those stars onstage, the building stood out.

The 3.1 million sq. ft. stadium is not just big, it is a stunning, starting with what most people notice when they first walk in: The massive, oval video screen hanging from the ceiling.

Dubbed Oculus, the 2.2 million pound ring is a 4K HDR video system from end-to-end. What’s more — and this may seem simple, but it’s important — there’s video on both sides of the Oculus. That means the audience on one side of the field can watch both the front side of the board and the back side that’s across the way, doubling the viewing experience. This type of simple idea carried out on a grand scale is what makes SoFi special.

When Staples Center opened in 1999, the massive wall of suites seemed designed not only to separate the city’s corporations from their money, but it also separated the good loge seats from the nose-bleeds. There were the haves, the have-nots and those with in-suite catering.

The first superstar to play Staples, Bruce Springsteen, saw it clearly as he inaugurated the venue. “Too many sky boxes,” he said.

The SoFi designers were a bit more discreet, if more profligate. There are there are a dizzying array of suites in the new Inglewood venue. There are Terrace Suites, Patio Suites, Perch Suites, Executive Suites, Bungalows and Field Cabanas. There’s also an Executive Club that wraps around the entire inner bowl. But the suites are for the most part tucked under or lodged within the various terraces. This avoids bifurcating the building while still allowing the well-heeled to spend freely.

While Springsteen found the sound at Staples impressive from stage, audience members on opening night — and more than a few since — have been less enthusiastic. Not so at Sofi. Even at least 50% empty, the sound in the building for Vax Live was good. For $5 billion, one would expect as much.

The seating is likewise thoughtfully constructed. The seats are the standard, squeezed-together nightmares, but the rake and positioning of the balconies are where the magic is. Due to the verticality, even the mid-level 300 section seems to be hovering right above the sideline.

And if those hunched together in the 300 section should grow warm on a hot L.A. day, the building’s creators have, again, a simple but grand solution. Forty of the 302 massive “picture frames” that tile the ceiling can be opened slightly to let fresh air in. And given the afternoon sea breeze that Inglewood enjoys, it’s an effective design element.

There were some hiccups during the space station’s inaugural voyage with a live crowd. Turns out, because the field dips 100 feet below ground level, the 300 section seats are actually on the 6th floor. The two rows of luxury suites between it and the 200 section only confuse things more. Not even the well-intentioned stadium workers hovering about to help the wandering masses for Vax Live knew which direction to go, repeatedly contradicting each other and angering some attendees.

Another question mark is food. There are copious facilities sprinkled throughout the arena, but none were open on opening night. Instead, there were about a dozen food trucks, each of which had longer lines than any of those to enter the building. Hopefully, the next time people file into the SoFi mothership, they’ll have an easier time getting their $18 nachos.

Bill Murray Leads ‘Take Me Out’ For First Full-Capacity Game At Wrigley Since COVID-19
In The Heights Fans Celebrate Release on HBO Max
‘Hammer blow’ as government advised to drop steel quotas
Zac Brown Band Set Sail Back to Their Roots in ‘Same Boat’
California Announces It Will Require Masks For Unvaccinated People In Indoor Public Settings And Businesses After June 15, But That Could Change – Updated