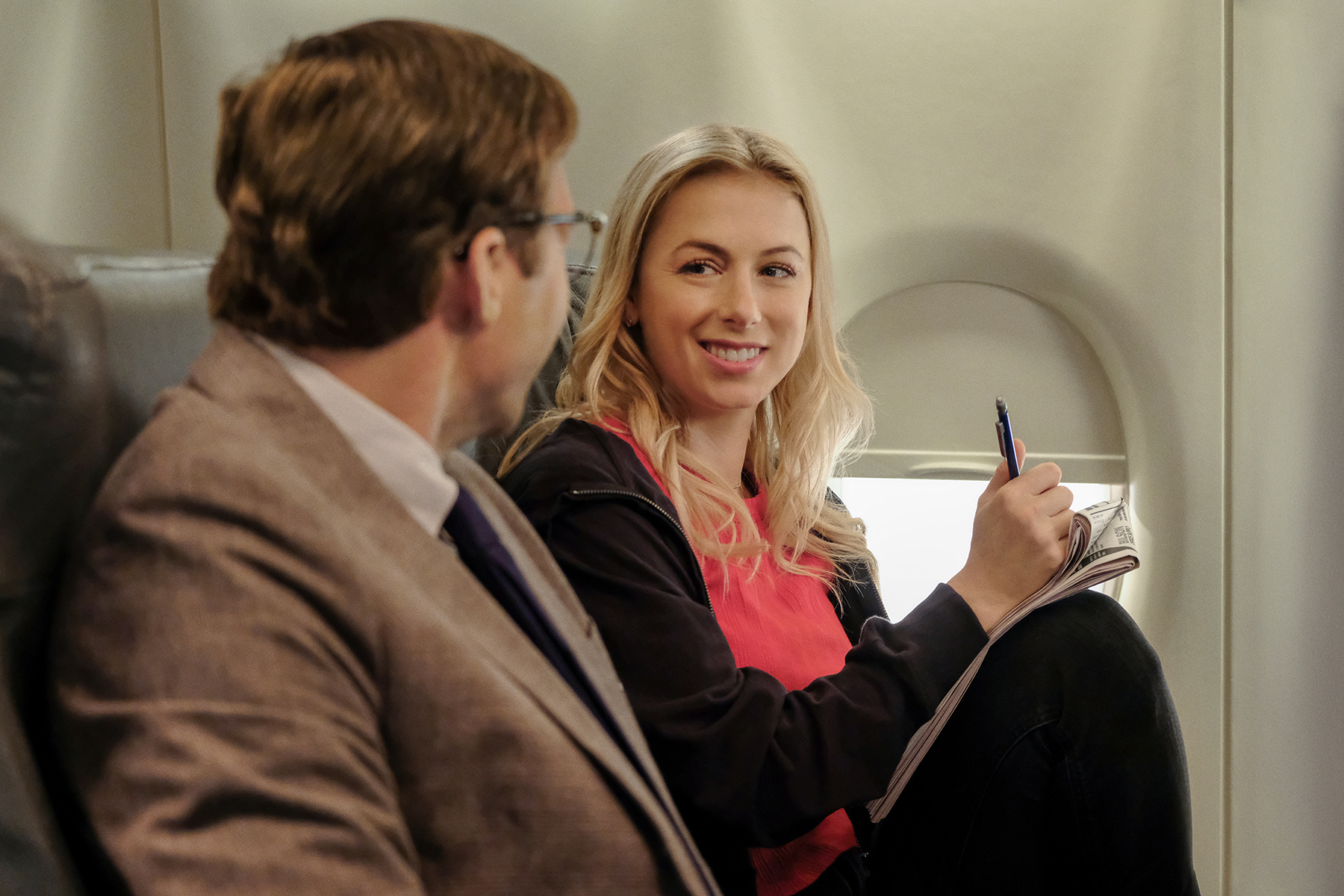 Before you assume that Iliza Shlesinger was in a dark place when she began dating a man who later turned out to be a lying sociopath; before you picture a woman who’s lonely, deluded, and a little bit sad; before you offer your diagnosis, that she must have “daddy issues” or a desperate need to please… let us stop you right there. Iliza Shlesigner is fine. Always has been. Self-possessed, emotionally stable, a haver of functional relationships.

“We’ve all had weird boyfriends, or not-great ones, but I don’t have a bitter taste in my mouth when I think of dating in my youth,” Shlesigner, 38, says, Zooming from a stand-up desk in her Los Angeles home, her rescue dog Tian Fu curled at her feet. “It had all been lovely, normal experiences. I always date men who I like and who like me and treat me with respect. So, I wasn’t broken or wounded, and I certainly wasn’t looking for ‘an answer.’”

The deception was such a sucker punch, took her so by surprise, that Shlesinger made a movie about it: Good on Paper, released to Netflix last week and currently holding down the number three spot on the streamer’s top 10 movies list. The story follows up-and-coming standup Andrea Singer (Shlesinger) through a friendship and then romantic relationship with a man who turns out to be a pathological liar. Dennis (played by Ryan Hansen) uses his real name when they meet, but everything else he tells Andrea — where he’d gone to college, where he lives, what he does for a living, that his own mother is sick with cancer — is a big, fat lie. Lies told first to impress her, then to ensnare her, then to keep her.

The movie is “two-thirds true,” Shlesigner says. “Every interaction, almost every line that he said, these things are real. I could not make up that extent of lying.” And yes, in real life, Shlesigner took the bait — but she won’t take the blame. Nor did she saddle Andrea with it: “She didn’t need a ‘lesson,’ didn’t need to be taken down a peg. She was just working, dating guys, some good, some not perfect. She didn’t need fixing. And neither did I.”

As it turns out, since having this experience and then writing (and producing, and starring in) a movie about it, Shlesinger found that a lot of people — nice, decent, not-stupid people — have been through something similar, falling for someone who lies on an order heretofore thought to be the exclusive province of serial killers or Russian hackers. And while the screenplay started as her “little secret,” something she worked on early in the morning or late at night just to process what had happened and get it on the page, it soon took on a bigger life, morphing into a revenge fantasy (if a relatively tame one) for every member of that unfortunate club.

In the third act, where some borderline-criminal hijinks ensue, and the liar is confronted by the lie-ee, Shlesigner took some creative license in the name of payback. “Everything from Dennis getting wasted off Breug, our fake whiskey that we invented — it’s Gaelic for liar — on is fiction,” she explains, referring to a bungled-interrogation-turned-accidental-kidnapping and a dramatic courtroom confrontation that compose the film’s climax. “I wanted a Once Upon a Time in Hollywood revisionist-history twist. It was my solidarity nod to anyone, male or female, who’s been unrighteously screwed over and had their cage rattled in a way that they didn’t deserve. This isn’t about a regular breakup.”

The relationship took place around 2015 and in reality ended, Shlesigner says, “with a whimper, not a bang.” (Shlesinger has been happily married to chef and cookbook author Noah Galuten since 2018.) A couple of friends and, crucially, her mom, raised red flags about the guy, and Shlesinger started digging (the character of Margot, played by Margaret Cho in the film, is an amalgam of those women). Her mother even did some sleuthing on her own, Googling the address he’d given Shlesigner and nudging the Yale-alum cousin — who’s named Brett, just like in the movie — to ask him questions about their allegedly shared alma mater. “It was a slow unraveling,” Shlesinger says. “But the second I knew it was wrong, I was gone.” 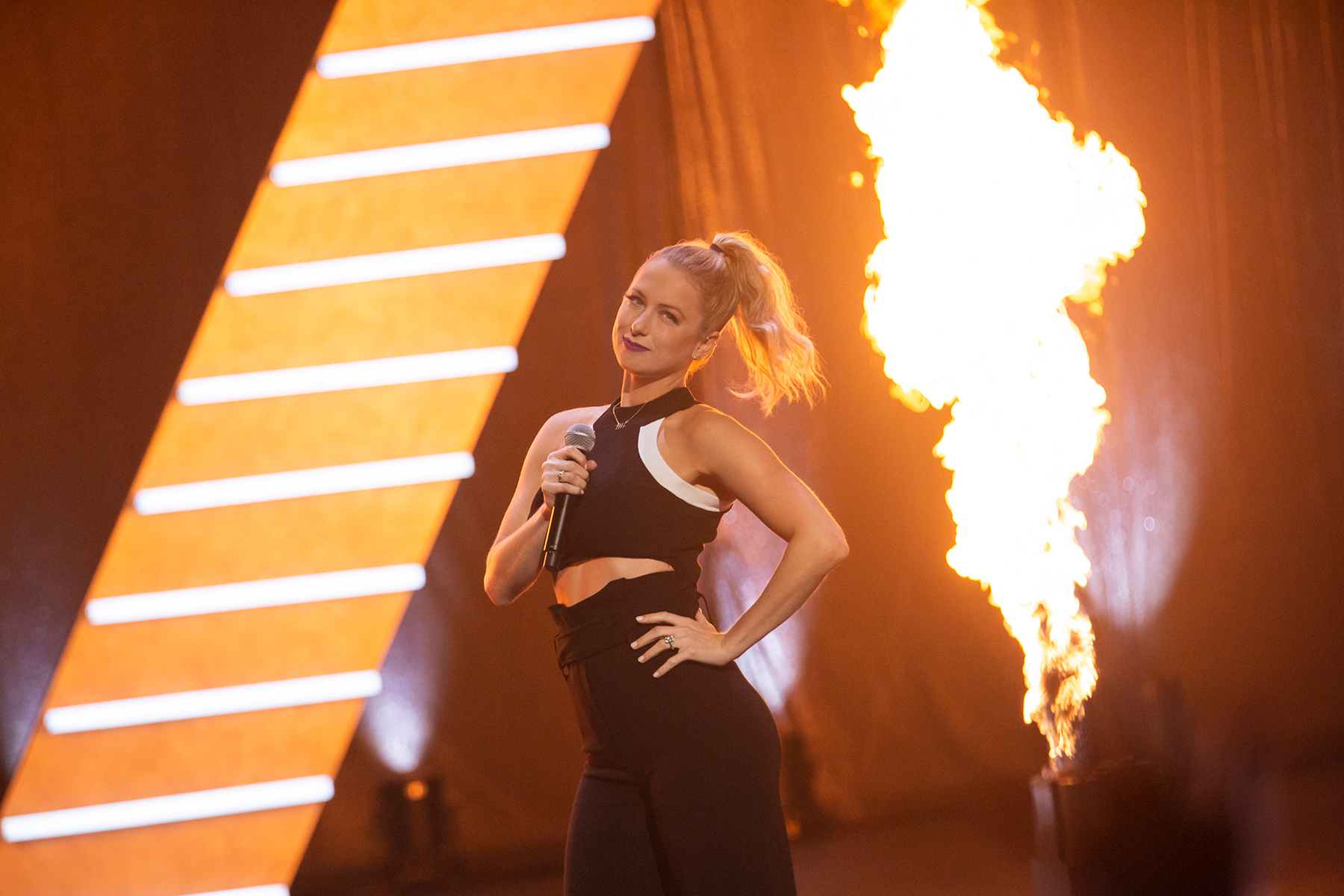 It took about two years for her to write the script and shop it around, and another two for revisions and preproduction before they shot in the fall of 2019. Throughout the development process, Shlesinger resolved to keep her main character grounded in reality and not some rom-com trope. “I didn’t want to present her as a hot mess or unlucky in love,” she says. “She is more like the average girl than movies give us credit for.”

A stand-up with five Netflix specials under her belt, Shlesigner also fought to keep Andrea a comic, weaving onstage bits into the film that in some ways mirror her own act. Shelsinger’s antic, high-energy comedy mines laughs from the pitfalls of dating and partying, but she’s never self-deprecating or cruel. She’s a champion of ordinary, mostly-got-their-shit-together girls (and guys) who are just grinding their way through life and trying to figure it all out. And, as Andrea does in the film, Shlesinger increasingly works quieter downbeats into her sets intended to buoy her audience, keep them steered in the right direction, or give them a little food for thought — like a cool, been-there-done-that older sister who’ll dish out some sly advice over a beer.

“I believe the comedy gods reward vulnerability,” Shlesigner says. “And sometimes vulnerability is just slowing down. If you’re at a 10 the whole time, speeding, your audience gets exhausted. The greater impact is in taking it down and then bringing it back up with a punchline […] saying something that’s authentic that you feel nobody else is saying. If you come from a place of raw, authentic honesty and back it up with intelligence, facts, and comedy, you’re unbeatable.”

Shlesinger says she wasn’t necessarily born to have a mic in her hand, but you wouldn’t know it from the self-assured way she speaks, and the take-no-prisoners drive that’s practically pulsing through the Zoom screen. (Still, earlier in our chat, she sounds bemused that people often label her “aggressive” or “strong”: “I don’t wake up every morning thinking about kicking doors down; I wake up thinking about my art and being me.”) Growing up in Texas, she wasn’t a student of stand-up so much as Nineties sitcoms like Martin and sketch shows from In Living Color to SNL to Kids in the Hall. She got involved in theater and the improv troupe when she was in high school, and then studied film at Emerson College in Boston. It was during a Semester at Sea study-abroad program that she first got a taste for comedy, threading wry observations about the 600 college kids she was stuck on a boat with into an otherwise semi-scripted one-woman show during weekly open-mic nights. “It got laughs,” Shlesigner says, both proud and still slightly incredulous. “And then people would come to my room to be like, ‘What are you going to write next week?’”

Post-graduation, she took that momentum to L.A., where she managed to finagle some five-minute sets at a now-shuttered venue called Room Five. Topics covered: “Pizza,” she offers. “Probably a herpes joke in there. Who didn’t have a herpes joke in 2005?” Soon enough she booked other clubs, then became a regular at the Improv and the Comedy Store. In 2008, she won the NBC competition series Last Coming Standing (the youngest and first female competitor to take the title), and the rest is history.

Shlesinger’s act, unsurprisingly, has grown up with her. And since her marriage to Galuten, she’s less inclined to explore, or exploit, the (supposed) battle between the sexes. The marriage is “very sweet,” she says, full of kindness and understanding and each partner giving the other the freedom to be themselves, which makes her protective over it. Her most recent special, 2019’s Unveiled, delved into the madness of weddings, specifically, but the next one — workshopped during the pandemic through her Comedy Tailgate Tour — will likely shift away from male-female relationships and aim instead for bigger, broader ideas.

“It’s so funny, you watch stand-up growing up, and it’s always like, ‘Take my wife, please.’ It’s always this guy who’s like stuck in a marriage, and it’s always about why he’s an idiot and why his wife is smart, y’know?” Shlesinger says. “I have a couple of jokes [about marriage]. But I never just for the sake of laughs want to portray it like ‘He’s annoyed with me’ or ‘He’s an idiot.’

“My life doesn’t revolve around those observations as much as it does constantly looking for reasons why we as humans think and do the things that we do,” she continues. “I made a real pivot a couple of years ago to skewering society. Holding up a mirror. Never saying one sex is better than the other, never catering, never talking to women in a pejorative way. So this new hour is poking fun at the way we’ve all acted. It’s about holding up that mirror and keeping us honest. And keeping myself honest.”