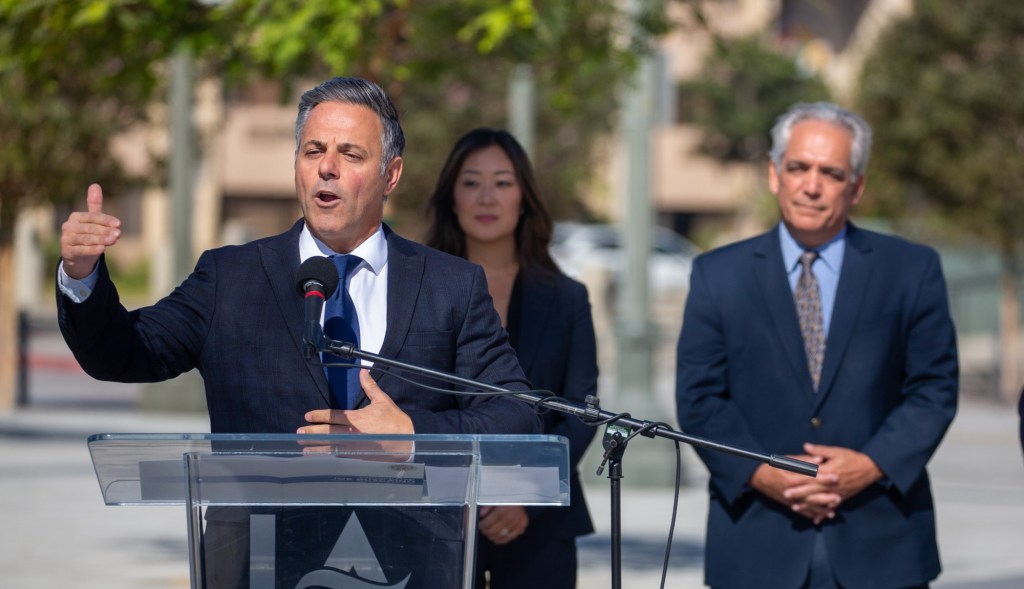 The Los Angeles City Council on Tuesday, Nov. 23, opted to send its Homelessness and Poverty Committee a motion from Councilman Joe Buscaino to begin the process for a ballot measure that would ban encampments across the city while prioritizing the production of emergency temporary shelter units.

The motion was before the full City Council for a vote, but several council members spoke in opposition to it. Councilman Paul Krekorian motioned to send it instead to the Homelessness and Poverty Committee, which passed on an 11-2 vote. Buscaino and John Lee — who had seconded the motion for a ballot measure — opposed sending it to the committee.

The council has previously rejected proposals from Buscaino to prohibit camping by people who have been offered shelter. Officials for the Safer Streets LA campaign said after the vote that they would begin the signature collection process in January and collect signatures until April.

Councilman Mike Bonin also said he believes the ballot measure would be solely focused on the problem of the presence of homeless encampments — and not on actually solving the homelessness crisis.

Several council members publicly opposed the measure before Tuesday’s vote. Councilman Paul Koretz said it would likely result in litigation and that it would be promising something to voters that the city could not quickly accomplish.

The chair of the council’s Homelessness and Poverty Committee, Councilman Kevin de Leon, who was absent from the meeting, said Friday that he thought a ballot measure would be the wrong approach.

“Since the City Council is actively moving forward policies to address homeless encampments through strategic outreach and housing for people in need, a ballot measure seems the wrong approach. The fact is that a ballot measure would be extremely costly to taxpayers and would likely result in a continuation of the litigation merry-go-round that’s kept the city from implementing real solutions,” he told City News Service.

Had it been approved by the City Council, the motion would have instructed the city attorney to prepare necessary documents to place a measure on the June 2022 primary election ballot that would:

— Require the city to prioritize immediate emergency shelter over other options, like permanent supportive housing

Under the city’s new anti-camping law, which went into effect on Sept. 3, camping in several areas of the city is prohibited, but most of the areas require a City Council vote before enforcement. People camping in areas chosen for enforcement are able to move their tents to other parts of the city if they do not accept shelter options.

In his propsed ballot measure, Buscaino called for a “FEMA-like emergency response, interim housing and services” to scale up shelter options so the city can prohibit camping in all areas.

“Why would we continue to allow someone to continue to live on public property if a safer, healthier alternative is available?” Buscaino asked.

“If there’s no appropriate shelter available, there will be no enforcement,” he added.

According to a pre-pandemic count, 66,436 people were experiencing homelessness in Los Angeles County, with 41,290 of them in the city of Los Angeles.

The city has about 15,000 shelter beds and 24,600 permanent housing slots. Bonin said the Los Angeles Homeless Services Authority told him the city only has enough beds for 39% of its homeless population.

Buscaino said in October, when he introduced the motion, that Los Angeles’ current system costs too much money and still leaves people on the streets, with about 1,383 homeless people dying in Los Angeles County last year.

On Thursday, Safer Streets LA, a campaign to pass Buscaino’s proposed ballot measure, released a poll from ALG Research that found 64% of 600 likely 2022 primary voters in Los Angeles would support a ballot measure to prohibit encampments in public areas, expand use of temporary housing and allow for expedited development of affordable housing for unhoused residents.

Paul Cauthen Unleashes ‘Country As F–k,’ Announces New Album
Motion Picture Association Posted $4.2 Million Loss In 2020 As It Reverted To Traditional Six-Member Roster
Minister fails to guarantee people will not have to sell homes to pay for care
New Netflix Hit Already the Second Most Watched Movie of All Time on the Streamer
Hackers Targeting Biomanufacturing Facilities With Tardigrade Malware